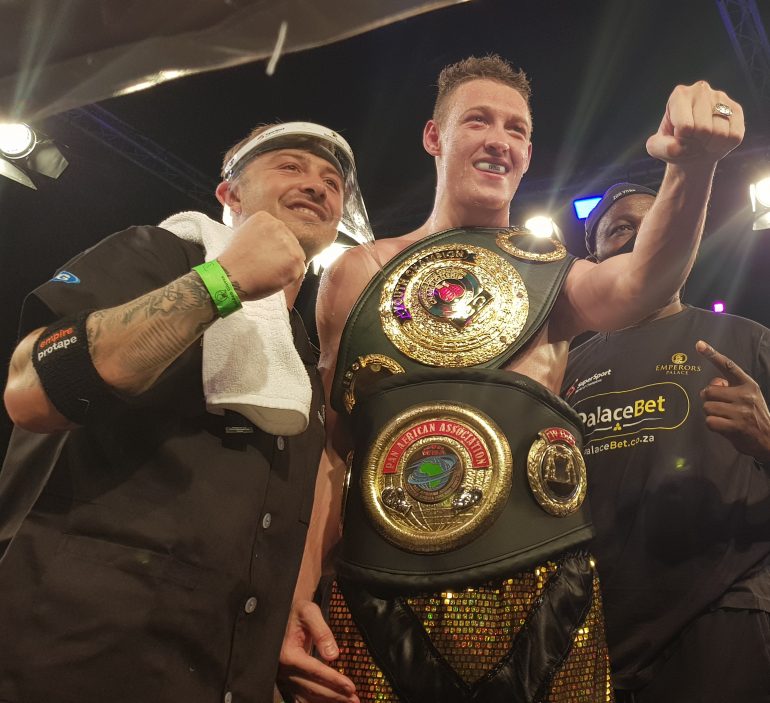 Brandon Thysse lived up to his bold prediction on Saturday night, delivering on his promise to stop Boyd Allen.

A beautiful left hook, set up by a right, caught Allen on the button towards the end of the third round. Allen went down heavily but somehow made it to his feet. Dazed, he backed to the corner where he stood with his arms on the ropes. Referee Jaap van Niewenhuizen was not satisfied that he could continue and waived it off standing at the 2:59 mark.

The fight, which took place at Emperors Palace in Kempton Park, South Africa, was the country’s first since the COVID-19 pandemic caused sports to shut down around the world earlier this year.

Before the knockout, it was a rather scrappy affair. Thysse was a man on a mission, charging out of his corner, crowding Allen and banging away to the body and head at the sound of the first bell. Allen side stepped and returned fire with some dangerous looking combinations of his own until Thysse rushed him again, working away at the body before Allen wrapped him up in a clinch. There was a lot of pushing and shoving with Thysse using whatever hand he could free.

In the second round, Thysse continued to press forward and drew a warning for a low blow. He landed a straight right to the body before falling into another clinch. He kept working away at Allen’s body whenever he could free his arms, until Allen spun him around and landed some shots of his own as Thysse exited the clinch. Thysse was unperturbed though and landed a good right hand towards the end of the round.

In the third, Thysse continued to work the body and the end came as Allen was backing up. It was as good a left hook as one could ask for and the fact that Allen made it to his feet is a testament to his conditioning and heart.

With this win, Thysse, who improves to 13-2-1 with 11 knockouts, does more than gain revenge for a previous decision loss to Allen. He also picks up the substantial winner’s purse, as well as Allen’s WBA Pan African belt and adds a special commemorative ring to his bling collection.

In the main supporting bout, Jabulani Makhense dipped his toe into the welterweight division and showed just why he is one of South Africa’s brightest rising stars, dispatching the usually durable Erik Kapia inside of a round to pick up the vacant WBA Pan African welterweight title. 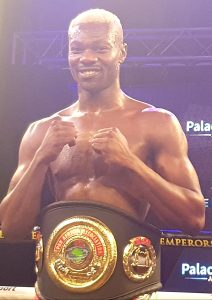 Most ringsiders expected a distance fight but Kapia and trainer, former cruiserweight contender, Sebastiaan Rothmann, promised that they had been working on throwing more combinations and sitting down on his punches and it was no idle chatter.

Makhense landed a flashy double left hook in the opening seconds and had Kapia looking uncomfortable before he scored the first knockdown with a right uppercut to the body. Kapia got up and seemed ok but a left hook followed by a right hand made the second knockdown that much harder. He got up once again but when a follow-up barrage sent him back to the canvass, referee Tony Nyangiwe waved the fight over without a count at the 2:59 mark.

Makhense improves to 10-0 with five stoppages, while Kapia, who was stopped for only the second time, drops to 22-4-2. There are plans afoot to showcase Makhense to the US market and his new-found aggressive streak bodes well.

The battle for third place in the [email protected] junior middleweight tournament also delivered fireworks, Roarke Knapp prevailing by TKO over Tristan Truter at the 1:02 mark of the second round.

It was an action-packed affair with Truter, boxing in an upright stance, using his jab and uppercut to good effect in the opening minute against Knapp who marched forward in a semi-crouch. Some good exchanges to the body followed with Knapp landing a solid right, answered by a combination from Truter. A hard right, followed by a left hook from Knapp found the mark at the end of the round and he appeared to have the heavier artillery.

Exchanging at mid-range with Knapp proved to be Truter’s undoing as a right, followed by a double left hook in the second round clearly hurt him. A barrage of punches by Truter drove him along the ropes to the corner where Knapp finished him with a devastating right that swiveled his head and left him hanging face first over the ropes, leaving the referee, Simon Xamlashe, no choice but to stop the fight.

Roarke Knapp now goes to 10-1-1 with eight of those wins coming via the short route and could not have chosen a more impressive way to rebound from his loss to Brandon Thysse in the semi-finals of the tournament. Truter drops to 8-3 and should maybe consider moving back down to welterweight.

In another rematch, cruiserweight Lebo Mashitoa got a repeat victory over Keaton Gomes, whom he outpointed in 2019, prevailing by unanimous scores of 100-89, 99-90 and 97-92 over ten rounds.

Mashitoa, who had to deal with the added stress of his trainer, Lionel Hunter, being hospitalized days before the fight, had a game plan that worked, and he stuck to it. Fighting out of his southpaw stance, he kept moving around Gomes, peppering him with right jabs, the occasional straight left and then attacking in bursts before getting back on his bicycle.

Gomes could not come to terms with Mashtoa’s movement and was reduced to following him around the ring, missing wildly with rights, thrown straight or as hooks. Gomes managed to land a good right uppercut, followed by a right hook in the third stanza, but any success that he had was too sporadic to win enough rounds.

To make matters worse, Mashitoa’s punches had Gomes bleeding from the nose from the sixth round and at the final bell, his face told the story of the fight.

Lebo Mashitoa improves to 8-1 with two knockouts while Keaton Gomes drops to 6-2.

This fight was one semi-final of a four-man cruiserweight tournament with undefeated Akani Phuzi set to meet veteran warhorse, Johnny Muller, in December this year in the other semi-final.

In the opening bout, Cowin Ray, now 6-0 with five stoppages, shook off more than two years’ worth of ring rust when he knocked out Karabo Mokupi, who drops to 2-4, courtesy of a well-timed right hand at 2:34 of the second round in a scheduled six round super middleweight contest.

The card was presented by veteran promoter Rodney Berman of Golden Gloves Promotions. Among the ceremonies at the show included the presentation of a special commemorative belt to Berman by Hall of Fame referee and judge, Stan Christodoulou, on behalf of the WBA for his services to South African boxing.