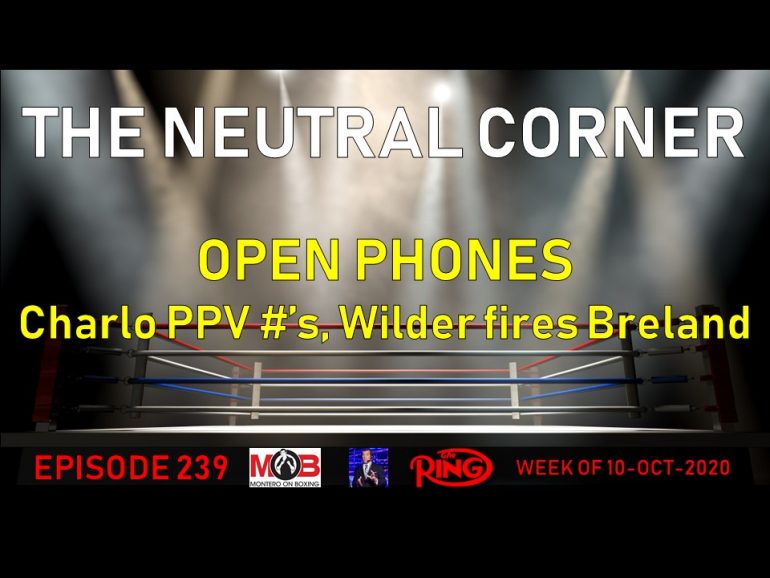 Former heavyweight titleholder Deontay Wilder fired his longtime trainer Mark Breland. Although no official reason was given, many suspect it was due to Breland throwing in the towel in the seventh round of Wilder’s rematch with Tyson Fury earlier this year. It appears that “The Bronze Bomber” will move forward with trainer Jay Deas and former heavyweight Malik Scott.

Canelo Alvarez refiled his breach of contract lawsuit against Golden Boy Promotions and steaming service DAZN. Unfortunately, it appears that the biggest financial draw in the sport will not fight in 2020.

Former light heavyweight champion Sergey Kovalev pled guilty in a criminal case for an alleged assault on a woman and her dog in 2018. He was ordered to complete an anger management program and will be on probation for the next three years.

Montero reviewed the explosive junior welterweight fight between Jose “Chon” Zepeda and Ivan “The Beast” Baranchyk last Saturday on ESPN+. After trading eight knockdowns in five rounds, Zepeda landed a short left hand that Baranchyk never saw coming. The Russian immediately folded over and crumbled to the canvas, where he remained unconscious for several minutes. It was a scary sight, but fortunately, Baranchyk was able to leave the ring under his own power and medically cleared the following day. The bout is an absolute lock for 2020 Fight of the Year, and contained Round of the Year and Knockout of the Year contenders, too.

On the schedule for this week is a ShoBox card with a 154-pound headliner between Charles Conwell (another recent guest on TNC) and Wendy Toussaint, as well as an ESPN broadcast of a featherweight title fight between Emanuel Navarrete and Ruben Villa.

For the most part, callers supported Deontay Wilder’s decision in firing Mark Breland.

“I criticize Wilder a lot but I can’t criticize him for this,” said one caller. “If he says that he wants to go out on his shield and he has a problem with his trainer, it’s his body and his choice. And we don’t know if the stoppage was the reason Wilder fired Breland, it could just be that he wants to try something new, get a new look.”

Another caller added, “Breland probably wouldn’t have been able to live with himself if he didn’t throw in the towel and Wilder was seriously injured. But if Wilder’s position is that he doesn’t want anyone in his corner to stop the fight, then it’s his right to fire Breland. But I’d rather have the guy looking out for my kids, for my financial future, in my corner. Props to Breland for doing the right thing. I hope he can sleep better at night, even if it means less money in his pocket.”