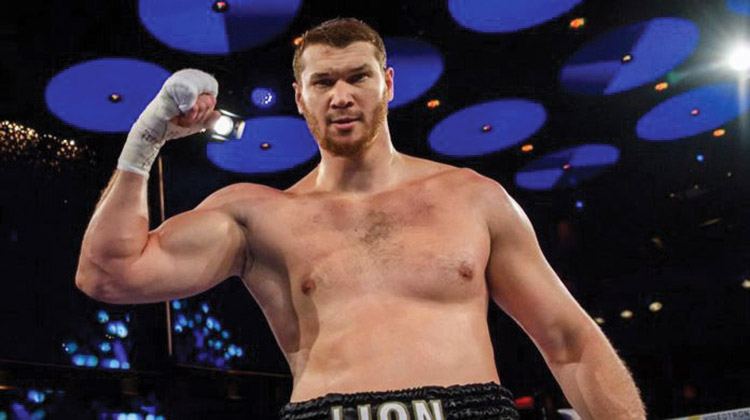 Be on the lookout for Arslanbek Makhmudov.
06
Oct
by Anson Wainwright

“The Lion” hurt Peter and dropped him midway through the round. Although Peter bravely got to his feet, Makhmudov quickly blasted the Nigerian with a big right hand that caused him to stumble into his corner, prompting the referee to stop the bout.

“It was a very important fight for me,” Makhmudov told The Ring. “We took the camp very seriously with Joey Dawejko and Oscar Rivas as sparring partners. I was very well-prepared.

“Peter was a big name and he tried to surprise me. I controlled every second of the fight and knocked him out. It was a great feeling to fight in front of a large crowd at the Bell Centre – I could feel the love of the fans.”

Heavyweight prospect Arslanbek Makhmudov (10-0, 10 KOs) put away former WBC world champion??Samuel Peter (38-9, 31 KOs), in the very first round. Makhmudov dropped with a big right hook and then pounded him for the finish. ~BoxingScene pic.twitter.com/cClwsshbSp

WORST NIGHT OF PRO CAREER AND WHY: The big Russian is unhappy with his performance against Julian Fernandez last September.

“I didn’t really show what we’ve been working on at the gym technically,” he said.

Despite the self-criticism, it was by no means a failure. Makhmudov trapped Fernandez on the ropes and teed off on him until the referee halted proceedings in the third round.

NEXT FIGHT: Makhmudov will square off against Canadian Dillon Carman at Centre Gervais Auto, Shawinigan this Saturday.

WHY HE’S A PROSPECT: Makhmudov was a good amateur; he was the Russian national champion in his age group (19-22) in 2010. More recently, he was also the No. 1-rated super heavyweight in the World Series of Boxing in the 2014-2015 season. He holds wins over amateur stalwarts Mahammadrasul Majidov, Erik Pfeifer and Mihai Nistor.

Makhmudov had aspirations of going to the Olympics and World Championships but saw those dreams dissipate.

“To go to these championships, generally you need financial backing, and I didn’t want to play politics,” he explained.

It didn’t take long for word to get out that Makhmudov had moved to Canada in the fall of 2017.

“I was notified by my general manager that Arslan was being trained by Marc Ramsay and he is an extremely special talent,” said Camille Estephan. “I believe after discussions that Arslan had with his friend (IBF and WBC light heavyweight beltholder) Artur Beterbiev, he was advised by Artur to look into signing with us. So we got a great referral, which I’m very happy about.

“I think from the talent and abilities perspective, he’s already there. He will certainly be a player in the heavyweight division, and I believe he has a chance to be on top for many years to come.”

The physically imposing Makhmudov is heavy-handed, possesses good technique and is a driven fighter, illustrated by the manner in which he has breezed past his first 10 opponents in just 19 rounds.

WHY HE’S A SUSPECT: Makhmudov, who is already 30, is beginning his pro career at an advanced age. While 30 isn’t “old” by heavyweight standards, the next year is a pivotal one for the Russian.

His team feels he needs three or four more fights to get accustomed to “the big lights and shows” before he can fight for the world title. Makhmudov will need much stronger opposition than he’s had in his first 10 bouts to reach this goal. Although Peter is a former world titleholder, the Nigerian was far removed from his prime.

He would be well-served facing solid gatekeepers like Carlos Takam or Robert Helenius or possibly someone like ex-titleholder Charles Martin. If he can pass that sort of test, he can zero in on a title shot.

Makhmudov has had things his own way so far. What happens when he faces some adversity? Can he take a big punch? Can he get up if he’s dropped? How will he respond when an opponent puts it on him?

Makhmudov fighting in the World Series of Boxing in 2015:

STORYLINES: Makhmudov was born in a small town in southern Russia, near the Georgian border.

“During the Soviet Union, my father was a bus driver and my mother was a teacher,” he said. “After the Soviet Union collapsed, they opened a store, their own business. Now they are retired and I work, knocking heavyweights out.”

As a youngster, Makhmudov often fought on the streets. When he was 9 years old, his uncle took him to the local boxing gym to learn discipline and keep away from trouble.

Makmudov vividly remembers the journey that forever changed his path in life.

“In the car ride going home with my uncle, he told me one day I’d be a big star like Muhammad Ali and Mike Tyson,” he said. “That motivated me. That conversation made me focus, and I was dedicated in the gym to follow that dream.”