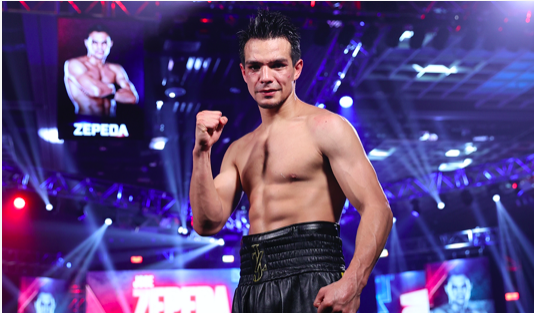 Nine times they went to the floor, eight officially. And Jose Zepeda kept getting up, and Ivan Baranchyk also kept getting up, until a left hand he didn’t see buzzed him so bad, he lay on the canvas for more than four minutes.

And praise be, the haze broke, and at the MGM Bubble in Las Vegas Saturday night, Baranchyk came to.

At that moment, anyone who watched on ESPN+, or the lucky few Top Rank, ESPN staff and corner crew in attendance were better able to appreciate what they’d seen over the course of almost five full rounds. They saw an indomitability of spirit in a boxing ring the likes of which one sees very, very rarely. Like, once a decade rarely.

This was and is the fight of the year. No, the vote by the Boxing Writers Association of America hasn’t made that determination, but the odds of any boxing match surpassing Jose Zepeda’s win in a junior welterweight battle in Vegas are so slim as to be almost nil.

I found it hard to lay down and get to a sleepy place on Sunday morning, and one can only imagine how people deeply involved in this classic felt.

There was a high to come down from, but also the leftover vibes from the panic you felt when you saw Baranchyk on his back, his eyes unfocused. Then, when word seeped out that he was in an ambulance, enroute to a Nevada hospital, and he was awake, and alert, you breathed a bit easier.

For the record, at that area hospital, University Medical Center, Zepeda actually ended up in the hospital bed next to Baranchyk.

The 31 year old California resident Zepeda (33-2 with 26 KOs) went for testing, just to be on the safe side.  “And before he left, he went up to Baranchyk’s bed, shook his hand and told him he was sorry and that they put on a hell of a show and thanked him,” reported Zepeda manager Steven Rimer. “It was just them two, and a curtain separating them. No teams members were allowed into the emergency rooms due to COVID.” 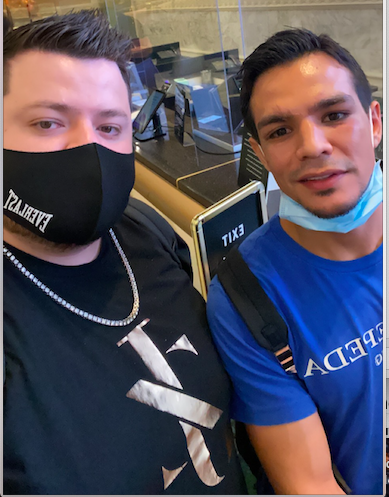 Manager Rimer and 140 ace Zepeda right before they checked out of the MGM Sunday night. Team Zepeda deserves every ounce of the dopamine surge “Chon” provided Saturday night.

Fight fans were happy to see the news, courtesy promoter Lou DiBella, on social media making the rounds on Sunday, that Baranchyk left the hospital, and he flashed a smile in a pic with co-promoter Tony Holden. “Thankfully,” DiBella Tweeted, “he’s well enough to talk about, and appreciate, the fight of 2020, with family.”

I messaged with manager Rimer, a 26 year old born in Pasadena, and living in Covina, who does real estate for his day job. “A superstar was born today,” he told me three hours after Zepeda showed the heart of a pride of lions, and my admiration of him rose 1000%, after I heard his humility displayed post-fight to Mark Kriegel.

“We made adjustments in camp and focused heavily on conditioning. And the right hook that lead to the knockout, we knew he was gonna need it. The knockdowns brought out the savage in ‘Chon.’ His flame is ignited internally now more than ever. I’m still on an adrenaline high,” Rimer admitted, leaving me to wonder how long he’d go before falling asleep.

And I did my part to prevent that, with more questions. And confessions. Such as, I wasn’t sure Zepeda had the power to keep Ivan off of him. “Coming in, his power was being question, Rimer continued.

“Being that the majority of Jose’s fights were in Mexico and since the Jose Ramirez fight (2-10-19) he’s been primarily fighting in the States, he was yet to really deliver a big knockout or knockdown performance,” the manager said. “He felt coming in he had to remind people why he had 26 KOs on his record.”

And, I told him, to me Jose deserves whatever the heck he wants next. What does he want?

“Jose wants a title fight next,” Rimer said. “He wants to push hard for a title fight. He wants the winner of Jose Ramirez-Josh Taylor after beating the most feared guy in the division in Baranchyk and defeating Jose Pedraza (9-14-19). In the case Ramirez (WBC and WBO champ) vacates the WBO title, he wants to fight Jack Catterall (rated No. 1 by WBO) for that vacant belt. He feels he deserves it and so do I as his manager…and his brother/trainer Rene wants the same.” 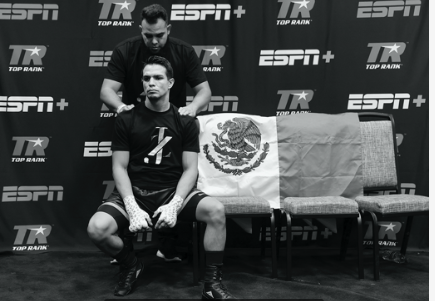 Brother Rene tells Jose before the Baranchyk fight that he has the stuff to get the W. ALL the stuff. Hand speed, stamina, power, everything. (Photo by Mikey Williams)

Then so do I. Outings like this need to be appreciated, in a sustained way. That’s something we in boxing, heck, we in this culture, don’t do enough of. We like to fixate on what went wrong, or what could be done better, and don’t often enough savor and fixate positively on triumphs of will, spirit and soul. That was what Zepeda did at the Bubble, and for that matter, Baranchyk too.

I told Rimer, and I will tell you, I don’t pretend to be what I’m not. I get repelled by people and athletes when they engage in anti-social or boorish behavior. And I appreciate the opposite. Like when Zepeda, coming in rated No. 6 by RING, to No. 3 for Baranchyk, spoke to Kriegel after ref Kenny Bayless raised his arm at the MGM.

“It’s a hard sport, probably the hardest sport. (I told Baranchyk after) thank you, thank you for the opportunity. Both of us are climbing up, and somebody had to stay,” he told the reporter.

And did he know he had that in him?  “I,” and he paused for a long beat, “know I was tough, I know I was tough, I didn’t know how tough I was. Tonight I showed..I showed myself, too. It was a great learning experience. Just believe in myself, it’s two guys in there giving their all, and at the end of the day it’s whoever wants it more.”

Kriegel asked him to admit, if he was comfortable, that he doubted himself pre-fight. “All the time, to be honest, it happens to me all the time in every fight, I doubt myself too much. I’m a fighter that only has 16 amateur fights, not a lot of experience in amateurs, I’m always doubting myself.” Kriegel showed his human side, to his credit, when he said, “I hope you don’t doubt yourself.”

“That’s ‘Chon,’ man,” Rimer said when I brought up that admirable honesty talking about emotions. “I tell him he doesn’t need to be so transparent about the self-doubt and mental battles because it can open him up for criticism from commentators and media, etc. But he’s the kind of person that will always tell you exactly how he feels without sugar-coating things or putting up a fake persona or bravado. Sometimes it works against him but I’m glad in this situation a lot of people admired him for it because he has paid negative consequences from the commentators in the past.”

Then, I say, that would be a discredit to a commentator. The honesty about self-doubt from Zepeda is to be appreciated, in a big way. You don’t think those words to Kriegel didn’t lift up regular Joes and Janes all over the place?

And here is some more on Rimer….He is a childhood friend to Zepeda, and an assistant coach, who helped work the corner Saturday night. “Me and Jose actually came up together in the amateurs, we boxed out of the same gym and forged a strong friendship. I started taking an active role in the team when I was 24, fairly young, I know. Jose saw me making moves in personal business endeavors and he trusted my eye for boxing being that we trained side by side for over seven years. It was a very natural thing for me to come on board officially.”

Oh, and in case you are curious, Rimer got to sleep at about 6 AM Sunday. “I am just waking up,” he admitted at about 10:30 AM Vegas time. “I’m seeing Jose’s KO is going viral on every major sport platform!”

And what about Zepeda, did he ever fall asleep? “We went out of the bubble to celebrate with his family on the Strip,” Rimer continued. “Fans were stopping him to take pictures up and down the Strip, which was really cool to see. He stood up until about 5 AM, just soaking in the win with the family and the team here at MGM. He’s yet to watch the fight but one thing he did tell me was he is glad the world has finally saw his punching power on full showcase. Because in the last few fights there may have been questions about his power. Jose and the team believe he erased those questions last night.” 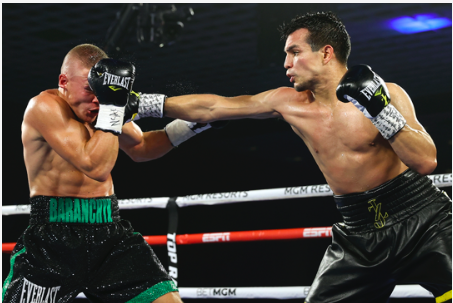 The power is now no secret, or doubted by pundits, we’d guess. (Photo by Mikey Williams)

Jose Zepeda earned a couple years worth of benefits of the doubt on Saturday night. Baranchyk did too. Hey, the next time you are tempted to pipe up about the downsides to boxing, and critique the sweet science, what say you–and I–remember what Ivan Baranchyk and Jose Zepeda did in Las Vegas Oct. 2020. If you watched live, consider yourself fortunate, this sort of violent collaboration happens once every ten years or so.

May I also humbly suggest you wrap your brain around the idea of Jose Zepeda being in the 2020 Fight of the Year, and also being named 2020 Fighter of the Year.