His guest on this episode is former two-time heavyweight titleholder Chris Byrd. They talk about Chris’s miraculous recovery from years of debilitating pain from nerve damage in his foot, hip replacement surgery and numerous shoulder problems. They discuss Chris’s new diet and alternative therapies that aided his recovery. 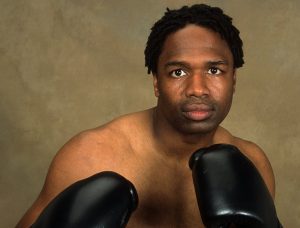 They also spoke about Chris’s great career from his days in the amateurs and sparring in an 8-by-10-foot ring in his parents’ basement; his trip to the Olympic trials in 1988 and his Olympic silver medal victory in 1992; not getting signed out of the amateurs; and his roundabout path to a world title as a small but avoided heavyweight.

Finally, they go into Chris’s battles with Ike Ibeabuchi, Vitali Klitschko, Wladimir Klitschko, Evander Holyfield, and many more and how he found out that many of his contemporaries were using PEDs.

Below are a few excerpts from the interviews:

On his ten year journey of pain post-boxing career:
“In 2008, I had my last fight in Germany and went to spar with Vitali Klitschko. Just to see about me still boxing. He was a heavyweight champion at the time. So, he called me, asked me if I want to spar with him. He was getting ready for Juan Carlos Gomez. And I’m like, yeah. So I go and spar with him. I weighed 191 pounds while I was sparring. And you know, I’m doing well. So I fought on the card afterward. Okay, I’ll keep boxing. I think I may go down to cruiserweight or whatever. And then a few months later, by September, October, I was still training, but I came down with a little bit of pain in my foot, in my pinky toe.

And I’m like, Hmm, that hurt. And then I go to a foot doctor and he put some tape on it, did certain things to it. It was okay. And then the pain came back like two weeks later – crazy! And that’s when my pain journey started. Man it went downhill from there. The nerve damage started getting bad, affected my whole pinky toe. Then it just started spreading. I moved from Las Vegas to Southern California at that time. And when I got to the San Diego area, it was full-blown. I mean, I was like, Oh my goodness, what is this? It was called neuropathy. And it was my foot, the burning. I was like, Oh my God. I mean, it was so bad starting off. It was that bad.

Then it got worse. It kept getting worse. And I can’t take prescription drugs. It affects my body. My body is different. Like I like GMO foods. I have allergies. There all kinds of problems with my body because I put on 50 pounds to be a heavyweight. And then I had to stay a heavyweight. The food was causing all kinds of problems. So the food was still causing a lot of problems with the nerve damage. But I didn’t know it was the food causing a lot of the pain because my diet wasn’t really clean. So man, I just started going through it, going to all the doctors everywhere. I mean, I was going to four doctors a week. I’m at the doctor getting all these different treatments, nothing helped. And then they gave me Lyrica.

Then they had me on prescription drugs and I was taking Lyrica. Man – suicidal. I almost got arrested in downtown L.A. I lost my mind – cops surrounded my car. Oh my goodness. My wife looked at me at the time, she said something’s wrong with you. I mean, look what you did. I went off on my nephew and my son, I went crazy. And then after that, I started having all these dreams – suicidal and you know, all this crazy stuff. Then I call a doctor, get off all the meds, get off those medicines that are making me crazy. And then I go to the Mayo Clinic and I thought that would be it. ‘Cause the Mayo Clinic is the spot. I was there for three days. They took all kinds of blood, all kinds of tests, everything.

And at the end of the three days, the doctor looked at me and said, I would think you were lying about your nerve damage. ‘Cause everything came out good. Literally shook my hand and that was it. I drove home. It was in the Phoenix, Arizona area. And I had to drive back five hours. I drove back and I’m like, what do I do now? So from that time, that was 2012 to 2017, five years I took the pain. I didn’t know what it was. I’m like, what the heck? No treatments work. Nothing. Nobody knew anything. I mean, chiropractors, kinesiologists, acupuncture, everything. And I’m just stuck out there in pain, going crazy. And then 2017, I finally, mentally broke, suicidal. I had a major suicide break and I had many throughout the five years. I was like, this is crazy. I can’t believe I’m in this kind of pain. I mean the flares. So the pain is like, it’s hard to describe when you have this kind of pain. Everybody’s like trying to figure it out. But I’m like, imagine having a toothache, the nerve is so bad. Now imagine all of your teeth like that. That’s how my whole foot was. I mean, I’m going crazy. The flares, I would have a thousand flares. All-day just constantly flaring.

I’m having nerve damage. And I’m forgetting about, I need both my shoulders replaced and both of my hips replaced all at the same time. And then I got a hip replacement because I couldn’t take the pain. And then after I had the hip replacement, I got calcium buildup and they said you will never run. You’ll have pain the rest of your life. I had more pain. My body was destroyed, but I had to look. I had to really look at boxing. I’m like, everybody tells me, ‘Man, boxing, you were a little guy, boxing really did damage to you.’ But I’m asking all the boxers. What kind of damage do you have? Most boxers have brain injuries, other injuries.”

On how he began his recovery:
“Near crippled, man. You’re going to have me crying about this. I’m with a cannabis expert, her name is Tammy Thomas. And she was like, ‘Chris, I can get you healed if you just listen and go by what I would I give you and tell you, I can get you healed, man.’ This girl went to work on me with cannabis at the highest level. I mean the high levels of THC, CBD every day. You gotta have a mindset, a mentality of I’m going to get better. I got to get better. And I worked ass off to get better. I mean, I’ve worked, stretch every day. I work out, made sure I stayed, positive, everything. Everything goes together with it. And it wasn’t just cannabis.

I was getting (CBD) treatment because the (medical) treatments weren’t working, I go to a guy named Aaron Cameron. He’s Denise Richards’ husband, the actress. And I go to his place. It’s a vibration sound and frequency. He used the treatments to help heal the body. I do all-natural stuff. So, for me, coming back to boxing this time – I’m healed – meaning healed, even during boxing. One of my points of coming back to boxing is to educate the boxer. The boxer does this:hHe fights, he cuts 30, 40 pounds. He fights. And (then) what do we do? Blow back up. You can’t keep going back up and down. The body doesn’t recognize it, it forms all kinds of problems. And that’s our problem as fighters. You can’t treat your body like that. It’s time to educate in swelling and being safe in the ring. Like for me, I teach defense, no boxers want to really learn it. Hey, this is a damaging sport. I mean like serious damage. You won’t have a life after boxing. You won’t have a life right now. It’s crazy.”

On the most underrated fighter he fought:
“(Tua and Holyfield) were great fights, but the fight I was more worried about was (Maurice Harris). He can fight his style. Yeah. He’s fast. But he’s the most underrated guy that nobody knows about. They’re looking at the record and say he’s not that good. He went to L.A., ask Lamon Brewster, and sparred with four different guys and champions Lamon, Francois Botha, James Toney, and Jeremy Williams. Jeremy was the only (one who wasn’t a champion). And (this was) when he was getting ready to fight me and Lamon called me. And he was like, man, you’re fighting Mo. They were worried about me because he came into the gym, he cleaned everybody up and I was like, dang. And everybody knew at that time he was hot. He won like five, six fights in a row. He took it seriously. And I’m like, hmm. And that was my biggest victory. I was like, oh, I beat Mo Harris. I wasn’t worried about David Tua, shorter guys like Mike Tyson, you gotta catch me. I’m gonna be moving. I got great legs. I got a great defense. And I’m gonna frustrate you like hell, so you better catch me.”