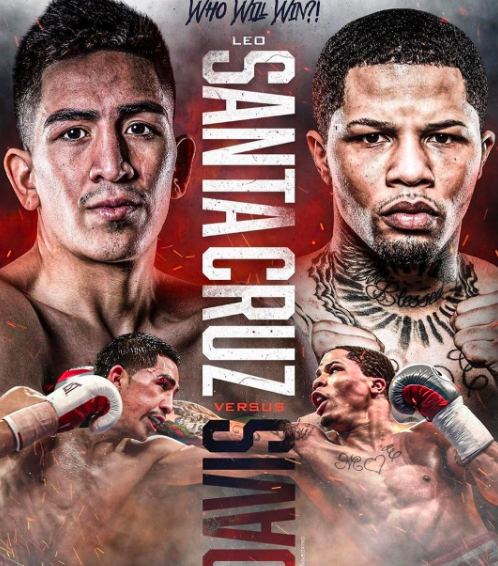 It’s going to be a spooky showdown with a few surprises.

The Showtime pay-per-view fight between Gervonta “Tank” Davis and Leo Santa Cruz has been moved from it’s original date of October 24 to October 31, according to a press release from the network, but with an extra wrinkle.

American boxing fans haven’t heard these words for the last eight months, but a limited amount of fans will be permitted to attend the event. The bout was initially supposed to occur at the Mohegan Sun Arena in Uncasville, Connecticut, but now will take place at The Alamodome in San Antonio, Texas.

The four-fight pay-per-view card will mark the first major boxing event with fans in attendance since the COVID-19 pandemic impacted the sports world in March.

The main event will be contested at 130-pounds and feature both Davis and Santa Cruz putting their respective belts on the line. However, this matchup is a rare one in boxing history as two titles from two different weight classes will be at stake.

Davis’ secondary 135-pound title will be on the line, as well as Santa Cruz’s 130-pound belt. Other notable occurrences include the 1988 showdown between Sugar Ray Leonard and Donny Lalonde for the light heavyweight and super middleweight titles, and the 2014 rematch between Floyd Mayweather Jr. and Marcos Maidana for the junior middleweight and welterweight world titles.

“I’m looking forward to showing the world how hard I’ve been working in camp,” said Baltimore’s Davis (23-0, 22 knockouts). “We are just a few weeks away, and I’m already in great shape. Headlining on pay-per-view has always been a dream of mine since I started boxing. I can’t wait to put on a spectacular performance against multiple division world champion Leo Santa Cruz. Thank you to my team, Showtime, Mayweather Promotions, GTD Promotions, and all my fans worldwide. Keep supporting me and I’ll fight for you.”

Santa Cruz (37-1-1, 19 KOs) is prepared for the toughest and the most significant bout of his career.

“October 31 is going to be the biggest fight of my career,” said Santa Cruz. “I’m going to fight a very tough opponent, maybe the toughest opponent of my career. Two titles are going to be on the line, and this will be my first time headlining a pay-per-view. So I’m going to do everything that I can to put on a good show. Davis is known for his power. But I think with my experience and ring IQ I can break him down. He’s probably going to be very aggressive in the early rounds. But if I do what I’m supposed to, and execute our game plan, I will win.”

In his last outing, Davis moved up to lightweight to stop Yuriorkis Gamboa in the 12th round. Last November, Santa Cruz outpointed Miguel Flores to become a four-division titleholder.