Mark Magsayo, now free of promotional issues, is ready to pick up where he left off 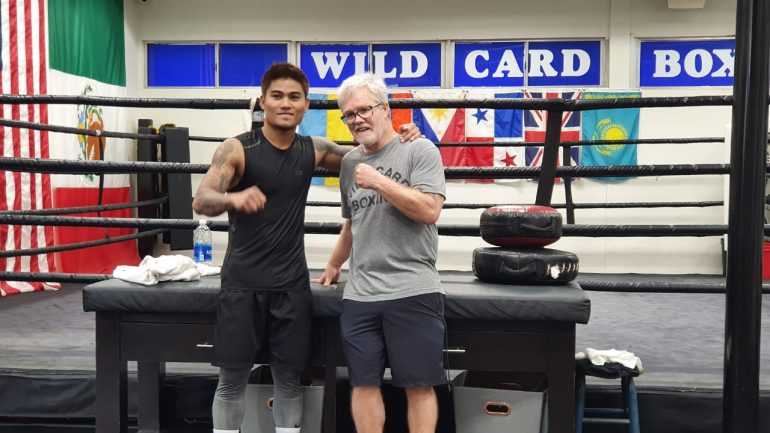 As a child growing up in the small coastal town of Dauis, in the Philippine province of Bohol, Mark Magsayo and his family worked long hours together in a bakery. His father woke up early in the morning to bake the pandesal rolls, while Mark made use of his youthful energy to help his mother, who would shout “pandesal init!” or “hot pandesal!” while selling them out front.

It was a hard life, with the family bringing in just 250 pesos (about $5 USD) per day, but boxing came along at age 8, allowing him to supplement his family’s income with 150 peso (about $3) purses from his amateur fights. He wound up with about 200 amateur fights, including four gold medals at national tournaments.

Now a 25-year-old on the verge of big fights in America, the unbeaten featherweight contender has a chance to make some serious bread, beginning with his ten-round bout with Rigoberto Hermosillo this Saturday from the Microsoft Theater in Los Angeles. The fight, which headlines a Premier Boxing Champions FS1 Fight Night card, will be Magsayo’s first since August of 2019, and his first since signing with Manny Pacquiao’s MP Promotions.

It’ll also be his first fight since relocating his training base to Hollywood, where he trains out of the Wild Card Gym with Freddie Roach and Marvin Somodio, with Justin Fortune working with him as a conditioning coach.

For the prospect with a 20-0 (14 knockouts) record, the time is now to work on his flaws, and not when he’s already in big fights.

“I know that I have a lot to improve on, that I am lacking a lot,” Magsayo said through his wife Frances Magsayo. “Training with coach Freddie, coach Marvin and coach Justin, they say I improved a lot. Defense, stamina, being smarter in the ring, not reckless.”

Reckless is one way to look at his biggest test to date, a 2016 shootout with Chris Avalos that would have gotten on Fight of the Year ballots had it happened stateside. In front of approximately 30,000 fans in Cebu City, Magsayo went for broke early, dazing the former title challenger multiple times before getting caught himself, going down in round 3 from a left hook. Magsayo rose up on buckling legs, and seemed to evade punches by the act of falling away off balance, until his head cleared. Magsayo was able to recover and win by sixth round stoppage, but the experience underlined his vulnerabilities.

His career has been up and down outside of the ring, too.

“This guy has had so many problems with promotional issues and just getting back on track with people. Leaving one set of people, that was bad, then he moved to another one, it didn’t get any better,” said MP Promotions President Sean Gibbons.

Magsayo had started his career with ALA Promotions in 2013, but left the company in 2018 after his contract lapsed. He then signed with the Las Vegas-based Now Boxing Promotions, but fought just twice in 2019 before parting ways with his second promoter. That’s when Gibbons, who had first met Magsayo in Malaysia before Pacquiao’s fight with Lucas Matthysse in 2018, doubled back to give Magsayo a second look.

“What I really like about Mark, his hunger, his drive, his determination,” said Gibbons.

“I just wanted to give him the right opportunity that he’s been trying to get the last few years.”

That opportunity became slightly more complicated when the original opponent, Jose Haro, withdrew from the fight, and Hermosillo (11-2-1, 8 KOs) stepped in on short notice, Though the Guadalajara, Mexico native is coming in as a replacement, and has lost his last two, by decision to unbeaten prospects Manny Robles III and Viktor Slavinskyi last year, Gibbons says the aggressive southpaw is a dangerous test. Gibbons says Hermosillo has been at the Maywood Boxing Club outside of Los Angeles getting strong sparring work, and had been a prospect signed to Zanfer Promotions before his losses.

“Throw records out the window, records mean nothing,” said Gibbons. “When the fight starts, he’s got nothing to lose. His world title fight is Mark Magsayo on October 3. If he wins, he opens up a lot of doors.”

And the same is true for Magsayo, who is rated in the top 15 in the WBC, WBA and IBF, though he’s not rated by the WBO, which had previously ranked him as high as no. 2. Gibbons hopes Magsayo will have a similar coming out party to the one his stablemate, John Riel Casimero, enjoyed last weekend in his U.S. television debut, when he blitzed Duke Micah in three rounds on the Charlo pay-per-view doubleheader.

“If Mark Magsayo goes and blasts out Rigoberto Hermosillo in sensational fashion, he’s ready for a world title. Any of them, WBC, IBF, WBA, he’s there,” said Gibbons.

“He’s like John Riel Casimero, what I know about him and you know about him, we need to have the fans to see on U.S. TV. That’s all Mark really needs, a big performance on Saturday night and all the opportunities open up for world titles.”