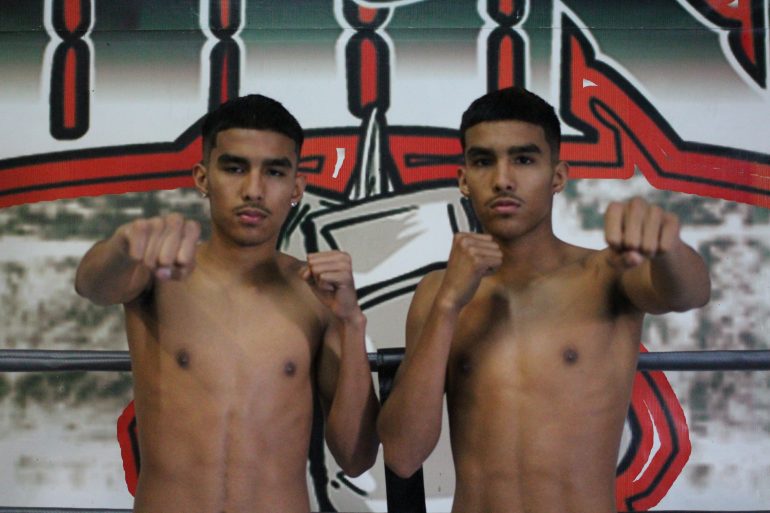 Undefeated prospects Ángel and Chávez Barrientes will fight for the first time under the Premier Boxing Champions banner this Saturday night.

The 18-year-old twins will be making their American debuts as well. After very successful amateur careers, they turned professional last November as high school seniors and have fought twice in Tijuana, Mexico. With both now sporting a record of 2-0 (2 KOs), they will open a “PBC Fight Night” broadcast on FS1 from the Microsoft Theater in downtown Los Angeles.

Although the Barrientes twins plan to campaign as junior featherweights in the near future, they are scheduled for six-round featherweight bouts on this card. Ángel will fight Fernando Ibarra (2-3, 1 KO), while Chávez faces Ivan Varela (3-2, 0 KO).

Ángel, the younger brother by 13 minutes, is promising big things. “The world is going to see something special when my brother and I step in the ring this Saturday,” he told The Ring. “It’s our time to shine.”

Chávez added, “The hard work is done. We’ve been sparring the best fighters in boxing, so nothing will faze us when we make our FS1 televised debuts on PBC.”

Born in Hawaii to a Mexican father and a Filipino mother, the boys have been boxing since they were ten years old. The family relocated to Las Vegas when the twins were two. That’s where their father and trainer Richard, who trained in boxing himself as a young man, would eventually open the Pound4Pound Gym. Richard would guide his sons to win dozens of national tournaments in the amateurs. Juggling school life and boxing life wasn’t always easy, and the boys had to be home schooled at times. But they were able to attend public high school in person and graduated this spring.

As young professionals, the Barrientes brothers have quickly developed a reputation on the gym scene, routinely sparring some of the biggest names in boxing. Among the fighters they sparred in preparation for this card is lightweight Gervonta “Tank” Davis, who will face Leo Santa Cruz later this month on Showtime PPV.

“It’s an honor to share the ring with such talented fighters,” Chávez said. “I’m very grateful. Tank has years of experience, knowledge and great skill; all of the ingredients a great fighter requires.” Ángel added, “We couldn’t ask for better work. Sparring Tank has been a great opportunity. He’s a world champion. He’s fast and strong. This experience is helping me stay disciplined and focused on doing what I gotta do.”

When Ángel and Chávez were guests on “The Neutral Corner” boxing podcast in August, they hinted about signing with PBC. They also expressed their fondness of another set of boxing twins with PBC, Jermell and Jermall Charlo, who scored impressive wins in their PPV debuts last Saturday.

“Both Charlos came out victorious and showed the world their superiority in their divisions,” Ángel said. “That body shot that Jermell stopped Rosario with didn’t look like much, but everyone knows that if you get hit in the body by a perfect punch, you will not get up.” Chávez added, “Derevyanchenko put up a tough fight but he never had Charlo in any serious trouble. Jermall showed a great power-jab and that set up all his power punches.”

According to publicist Mario Serrano, the Barrientes twins will be regular fixtures on PBC events going forward, and will be on the fast track to world title shots. As for what fans can expect Saturday night, both twins confidently predict stoppage wins.

“Obviously, I’m coming out with the victory,” Chávez told Ring. “I’m going to break down my opponent and take him out late.”

“My plan is to not let the fight go the distance,” Ángel said. “I’m pretty confident I will go in there and get the stoppage.”

Michael Montero can be found on social media via @MonteroOnBoxing. His podcast “The Neutral Corner” can be seen every Monday on TheRingDigital YouTube channel, and heard on numerous audio podcast platforms around the world.