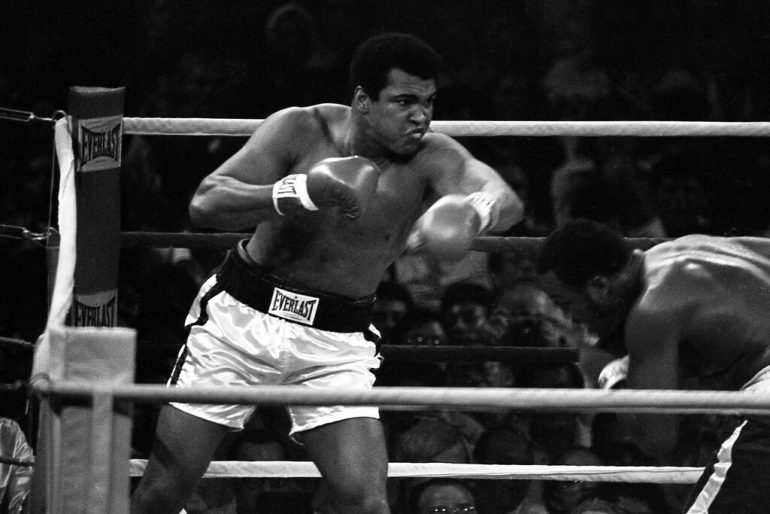 Editor’s note: This feature originally appeared in the March 1976 issue of The Ring Magazine.

FIGHTER OF THE YEAR

In the parlance of The Ring, crowning the worldwide Fighter of the Year for 1975 was just a breeze.

When the first yacht race for the America’s Cup was held many years ago in Cowes, England, Queen Victoria asked the captain of the royal skiff, “And who is second?” he replied sadly, “Your Majesty, there is no second.”

For the Fighter of the Year distinction of 1975 there was no second.

Muhammad Ali achieved The Ring’s supreme glory for the second consecutive year and the fourth time in his career. He had won the honor in 1963, in 1972 in company with Carlos Monzon, world middleweight champion, in 1974 and now 1975.

Thus did the onetime Cassius Clay set a multiple, unmatched record for achieving a fistic distinction originated in 1928 by the late Nat Fleischer with the naming of Gene Tunney, who had wrested the world heavyweight title from Jack Dempsey, and who retired unbeaten as a two-time winner over “The Manassa Mauler”.

The marked ease with which Muhammad Ali gained The Ring’s annual major prize had few counterparts in the long history of the Fighter of the Year competition.

The victory over Frazier was marked by one of the most exciting and technically near-perfect performances in the history of the heavyweight division since the days of John L. Sullivan and Jim Corbett.

For 10 rounds it was so fierce a battle that Ali was tempted to give it up.

He decided to give it another round and then the champion rallied to deliver of the most telling blows in the 13th.

So terrific a comeback did Ali organize that Frazier could not last out the three minutes he needed to make the full distance of 15 rounds.

Ali left the Manila ring acclaimed by his supporters as the greatest heavyweight in fistic history. Great, but not quite that great. 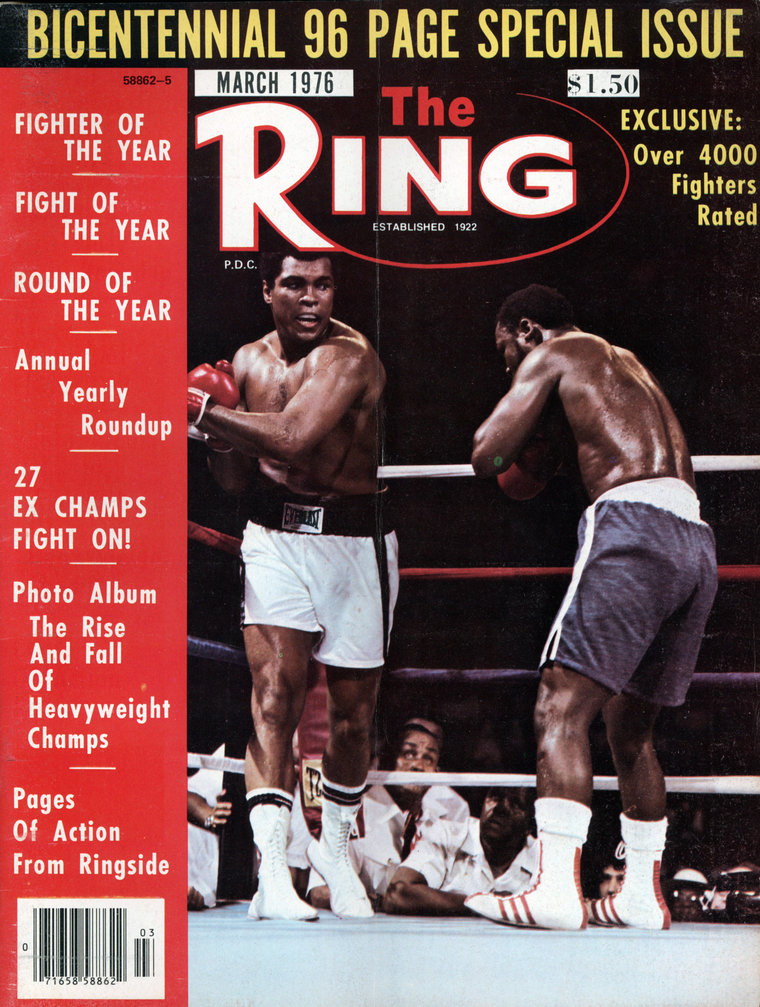 Just as Muhammad Ali easily was the Fighter of the Year 1975, so was his battle in Manila with Joe Frazier the Fight of the Year

The contest in the Philippines had a lot to do with establishing Ali as the standout scrapper of the 12 months which figured in the major award to the reigning sensation of the world ring.

“The Battle of the Century” they called it in advance publicity. It may not have been quite that, but it finished up, in 14 rounds, as one of the greatest engagements in the dramatic detailing of the most important, most thrilling and eventful fights since Jim Corbett knocked out John L. Sullivan in 21 rounds in New Orleans in 1892.

The Joe Frazier who faced Ali, for the third time, in Manila, was not Chuck Wepner. He was not Joe Bugner, he was not the Sonny Liston from whom Ali won the championship.

This tough, rough man from Philadelphia, who gave his all in 42 minutes of terrific action, without a letup, was the most formidable opponent a world champion had faced in a long fight since Tom Sharkey went 25 rounds against Jim Jeffries at Coney Island on November 3, 1899.

In Manila Joe collapsed after the fourteenth round and could not possibly have lasted the remaining three minutes.

There were no knockdowns in Manila, but Frazier came close to hitting the deck in the 14th.

There was no doubt even in the mind of the champion that he could come out for the 11th. But no gamer champion ever before entered the ring. Muhammad decided to stay with it, and stay he did to the brutal finish.

The finish of the Fight of the Year and many another year. Maybe it truly was “The Battle of the Century.” The fighting fraternity will be hard pressed to produce a better one.

The man makes the fight, the rounds make the fighter and so very often one of the those rounds means the victory.

Quite often the third item becomes the paramount factor.

The Round of the Year climaxed the big sweep which Muhammad Ali topped off in The Ring summation of the fistic feats of 1975.

It is the most remarkable monopoly of a year’s achievements in the history of the three categories set up in The Ring by the late Nat Fleischer.

The Round of the Year was round No. 12 in the series of 14 which made Ali’s knockout of Joe Frazier in their third meeting, in Manila.

By Muhammad’s admission, as he hit his corner after the 10th round he was of a mind to call a halt. He had been the target of round after round of severe body punishment. In the seventh, eighth, ninth and 10th rounds Ali had taken a body punching assault almost without precedent in heavyweight competition.

Then came the 12th round, which really ended Joe’s chances. In the 12th Frazier was staggered and his mouthpiece knocked to the canvas. In the 11th and 12th rounds Ali discovered that he was in better shape than his challenger.

His decision to continue the fight had been justified by his superior resources. Probably the decision Ali had made in his corner after the 10th had been the most important one of its kind in heavyweight annals.

After 10 rounds it had been a fairly even fight.

After the 12th round it was apparent that Frazier was on his way out.

After the 14th round it was an entry in the record book.

Just how vital one round can turn out to be has been demonstrated fairly often.

For one, there the first of the two rounds in which Jack Dempsey figured with Luis Firpo at the Polo Grounds. In this fight the Wild Bull of the Pampas knocked Dempsey out of the ring. The Bull was slaughtered in the second.

Let us not forget the 11 rounds in which Max Baer knocked down Primo Carnera.