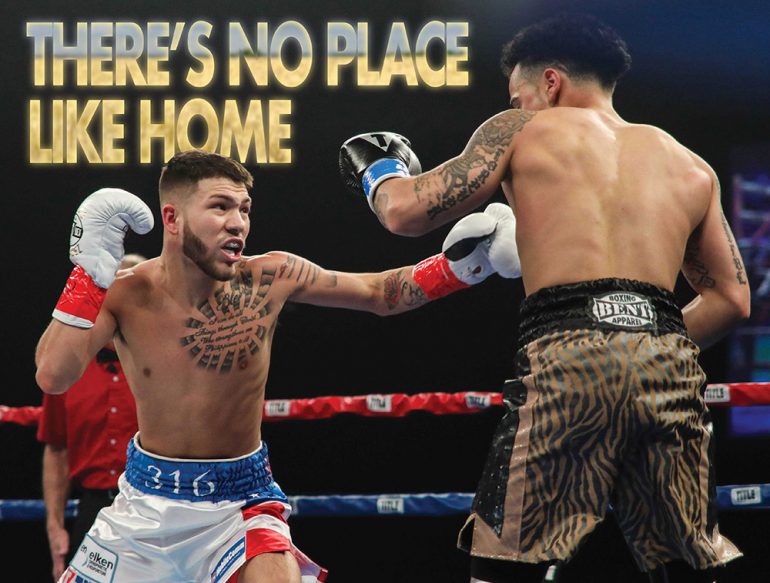 Nico Hernandez throws a left hook against Pat Gutierrez during the first round at Kansas Star Arena in Mulvane. Wichita’s Hernandez made his pro debut with a fourth round technical knockout. (Mar. 25, 2017)
30
Sep
by Ryan O'Hara

Flyweight prospect Nico Hernandez is putting his boxing career on hold temporarily for a bare-knuckle fight.

Hernandez (7-0, 4 knockouts), of Wichita, Kansas, has not fought in a boxing ring since February 2019 after sustaining a wrist injury in a car accident.

However the 24-year-old revealed to The Ring in an exclusive interview on Wednesday afternoon that the wreck was not the only factor behind his hiatus.

“I was stuck under contract with John Anderson of KO Night Boxing,” Hernandez explained. “He didn’t fulfill his end of the deal and get me my fights.

However Hernandez assured his fans that this move is only to stay active.

“My goal is to get back to the boxing world and take over the flyweight division,” he clarified. “Boxing is what I do, so I’ll be back. Don’t worry.

“I literally just got out of the contract (with Anderson) right before I signed to fight Wilson, so it’s about staying active.”

Is Hernandez concerned about the possible risks associated with bare-knuckle fighting?

“I’m not worried about it at all,” he admitted. “In boxing, there’s more brain damage. With bare-knuckle, you have to be worried about cuts.”

Barring any unforeseen circumstances, Hernandez intends to shift his focus back to boxing immediately and sign with a new promoter.

“I have world title aspirations as you know,” he explained. “All of the big names, I’m interested in signing with them.

“Bob Arum, Eddie Hearn, they would be making a good investment in me. I’m young and I’m looking forward to getting my face out there and getting some exposure.”