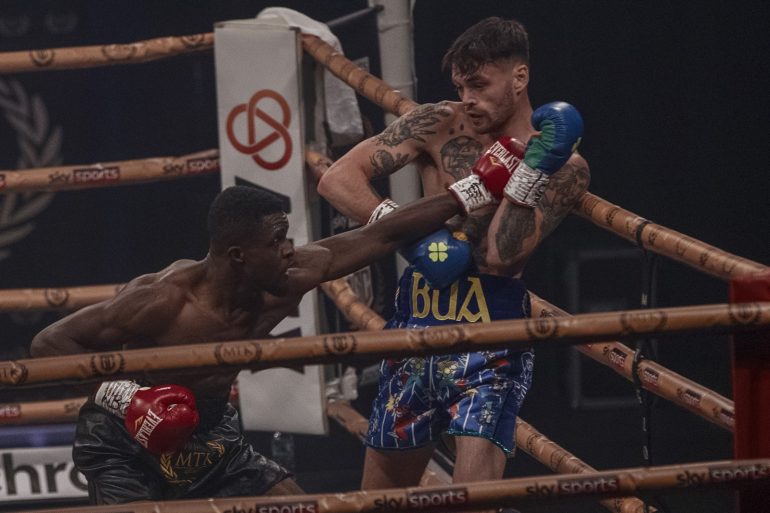 Davies (left) on the attack against McKenna. Photo courtesy of MTK Global
30
Sep
by Tris Dixon

Ohara Davies came through a tricky night against Tyrone McKenna in the junior welterweight final of the MTK Golden Contract tournament.

The divisive Davies won a majority decision with judge John Latham seeing it an even 95-95 but he was overruled by Howard Foster and Mark Lyson who both scored it 96-94.

“I feel good,” said the winner. “Training camp was extra hard, extra long. I’m on top of the world. I don’t think it was that close. I thought I won the fight quite comfortably. I could have taken it up another two or three notches. He probably won two or three rounds of that fight.”

Both fighters tried to get untracked in the early going, throwing hard shots, and Davies landed a big right hand that clearly registered.

The pace slowed in the second with McKenna using the ring more and he landed some sharp shots in the third, particularly a straight left down the middle.

Davies, who was trained for the fight by former world title challenger Kevin Mitchell, wasn’t throwing often and he was missing plenty but he was the puncher in there and knew one shot could be enough as the fourth progressed.

He landed some good shots in the fifth but they didn’t discourage McKenna.

The sixth was more physical. McKenna (23-2, 6 KOs) was cut by the right eye and Davies was more aggressive, closing the gap faster and throwing more shots.

Davies opened the eighth with a double left hook but the Essex man was having trouble pinning McKenna down and cutting the ring off. Mitchell slapped him in the corner at the end of the round.

It wasn’t a thriller and scorers would have either preferred McKenna’s boxing and moving or Davies’s bigger shots and aggression.

Davies (22-2, 16 KOs) lost his balance and slipped to the deck in the ninth but landed a left hook moments later with his feet well beneath him. The blood still trickled around McKenna’s eye and there wasn’t much to separate them throughout.

The show suffered a hit on fight week when the anticipated clash between Jazza Dickens and Ryan Walsh was postponed after Dickens and trainer Derry Mathews tested positive for COVID-19.