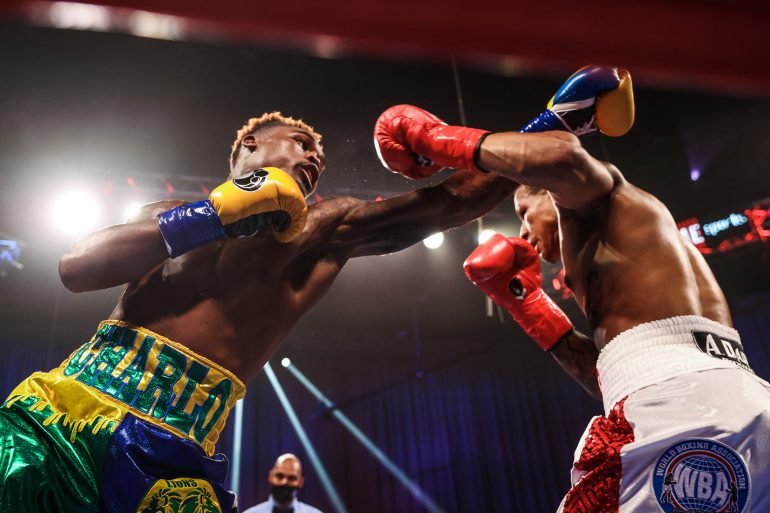 There is no doubt now: Jermell Charlo is the No. 1 junior middleweight in the world.

Charlo put an exclamation point on his claim with a resounding eighth-round knockout of Jeison Rosario to unify three major sanctioning organization belts and win the vacant Ring Magazine championship at 154 pounds on Saturday night in the main event of the second half of a marathon Showtime PPV doubleheader at the Mohegan Sun resort in Uncasville, Connecticut.

In the main event of the first half of the overall six-fight event, Charlo’s twin brother Jermall Charlo retained his middleweight world title with a clear unanimous decision over top contender Sergiy Derevyanchenko, giving the brothers big wins as they co-headlined their first pay-per-view event.

Rosario had his moments but it was Charlo who landed the bigger, cleaner punches, knocking Rosario down in the first round and the sixth round before finishing him early in the eighth round. 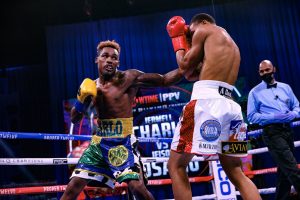 “I definitely proved that I’m more than just a puncher, but I also showed again that I’m a big puncher,” said Charlo, who was making the first defense of his second title reign since regaining a belt by 11th-round knockout of Tony Harrison in their rematch in December. “I’d give myself an A tonight. I stuck to my game plan and listened to my coach (Derrick James).

“Everything we did in camp, I used it in this fight. I pushed myself the whole way through training camp. It’s been a journey for me. I’m bringing the straps home to my family like they told me to.”

The 30-year-old Charlo (34-1, 18 KOs), of Houston, started quickly, dropping Rosario with a left hook on the top of the head followed by a right hand in the opening seconds of the fight. Rosario did not appear too damaged from the shots but it put Charlo in control of the fight.

“I knew that he was going to keep coming after the first knockdown,” Charlo said. “He kept pressing for four or five rounds until I floored him again. I’m growing and learning that the knockout just comes. I know that I have explosive power in both hands. I utilized my jab more than any other punch in this fight and that’s what got me these straps.

“Rosario hits hard, but if you have to know how to wear a fighter down. That’s how you take the power out of him.”

Besides his jab, Charlo also relied heavily on his left hook while Rosario targeted Charlo’s body round after round.

In the fifth round, Charlo had done very little until with about 50 seconds to go he nailed Rosario with a solid right hand to the head that drove him back.

Rosario had strayed low with body punches earlier in the fight and when he went low again in the sixth round, referee Harvey Dock gave him a stern warning and said if he did it again it would result in a point deduction. Later in the round, Charlo connected with a solid left hook and a right hand to score his second knockdown of the fight in the final seconds of the round.

Rosario was very wobbly from the knockdown but Charlo did not try to press the action in the seventh to see how badly hurt he was. But in the eighth round, Charlo landed a stiff jab to the pit of Rosario’s stomach and Rosario dropped to the mat.

Although the punch was partially blocked it clearly did major damage. Rosario was on his back, seemingly gasping for air and convulsing. He eventually made it partially to his knees but Dock counted him out at 21 seconds as he fell backward into the ropes and remained down for awhile.
It is unusual to see a fighter knocked out by a jab, especially one that did so much damage. Charlo said he thought Rosario was just worn down from punishment earlier in the fight.

“I think some of the previous punches I landed hurt him before the jab,” Charlo said. “The body shot that landed just hit the right point.”

Charlo was ahead on all three scorecards going into the eighth round thanks to the earlier knockdowns. Judge Steve Weisfeld had him leading 66-65 and judges Glenn Feldman and John McKaie had him up 67-64.

According to CompuBox statistics, Rosario had the edge in punches thrown and landed even though Charlo did the damage. He landed 64 of 242 punches (26 percent) and Rosario landed 85 of 367 (23 percent).

Rosario’s time in the spotlight may turn out to be brief. Rosario (20-2-1, 14 KOs), 25, who grew up in abject poverty in the Dominican Republic before 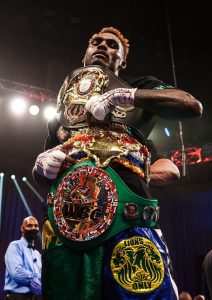 turning pro in 2013, came out of nowhere in January when he won two belts in upset fashion, traveling to Julian “J Rock” Williams’ hometown of Philadelphia and knocking him out in the fifth round before losing his hardware in his first defense.

“I wish him well. I give any man who steps into the ring respect,” Charlo said of Rosario, who was also knocked down three times and stopped in his only other loss, a sixth-round knockout to Nathaniel Gallimore in 2017. “I hope he recovers and bounces back.”

Where Charlo goes from here remains to be seen. He will undoubtedly have mandatory challengers put forth by the sanctioning bodies. He has said he has no interest in moving up to middleweight to join his brother. Time will tell where Charlo goes next, but he will enjoy this big win.

“Dreams do come true,” Charlo said. “This is a part of my dream and a part of my destiny. I’m satisfied and I’m happy. I know right now that I’m going to talk with the sanctioning bodies and see what’s next. I’m holding the crown. I’m the king.”