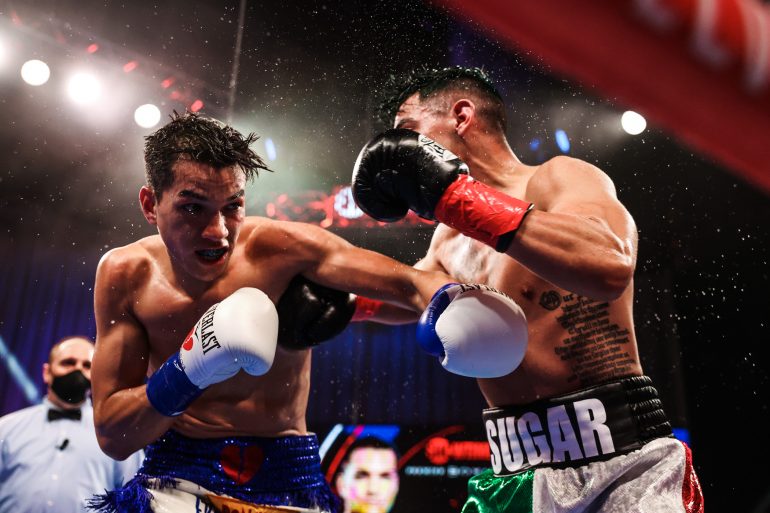 Brandon Figueroa lived up to his “Heartbreaker” moniker.

Figueroa retained his secondary 118-pound title on Saturday with a one-sided 10th-round TKO of a brave Damien Vazquez at Mohegan Sun Arena in Uncasville, Connecticut.

The bout win was the second fight of Showtime’s six-bout PPV event.

Figueroa’s triumphant performance was the third defense of his belt. His last bout was a 12-round split draw with Mexico’s Julio Ceja (32-4-1, 28 KOs) last November in Las Vegas.

Both fighters went toe-to-toe in round two. The southpaw Vazquez worked behind a quick jab and some solid counter punches. Figueroa found success on the inside on a couple of exchanges, backing up Vazquez with solid left hands.

In round three, Figueroa struggled to land punches as he allowed Vazquez to move around the ring at will. However, that wasn’t the case in round 4.

Figueroa moved Vazquez to the ropes and connected with strong left hands behind an effective jab. Late in the round, Figueroa, the most prolific volume puncher in the history of the 122 lb. division, according to Compubox, briefly stunned Vazquez with an authoritative left hand and began to really let his hands go with his combinations.

Despite suffering a cut and swelling below his right eye, Vazquez had a better performance in round six as he landed a triple jab.

Late in the frame, Figueroa moved Vazquez to the ropes and invested downstairs with the left hook. He also wasn’t afraid to get dirty, as he connected with a pair of rabbit punches.

It was a phone booth fight in the seventh round. Vazquez connected with a hard straight left hand that clipped Figueroa’s chin, who briefly held on before landing his own series of left and right hands.

But it was clearly becoming a battle of attrition for Vazquez, who was cut around his right eye.

The fight was briefly delayed before the start of round eight as the ringside physician examined Vazquez.

When the bout resumed, Figueroa tried to end the fight with a series of hard punches to the body and the head.

Figueroa badly hurt Vazquez with a clubbing left hand with just over a minute remaining in the round, forcing him to hold.

Momentum was clearly in Figueroa’s favor, but referee Gary Rosato warned him for punching behind the head.

By the end of the round, the cut around Vazquez’s right eye had worsened.

Vazquez was warned before the start of round 10 by the ringside physician that he would stop the fight if he continued to take punishment.

Figueroa viciously pounded Vazquez, before caving in his man with a right-left hook body combination, forcing Rosato to immediately step in.

Before Saturday evening, Vazquez had only suffered one defeat in his pro career, an eight-round, unanimous decision to the Dominican Republic’s Juan Carlos Payano (21-3, 9 KOs) in March 2019.