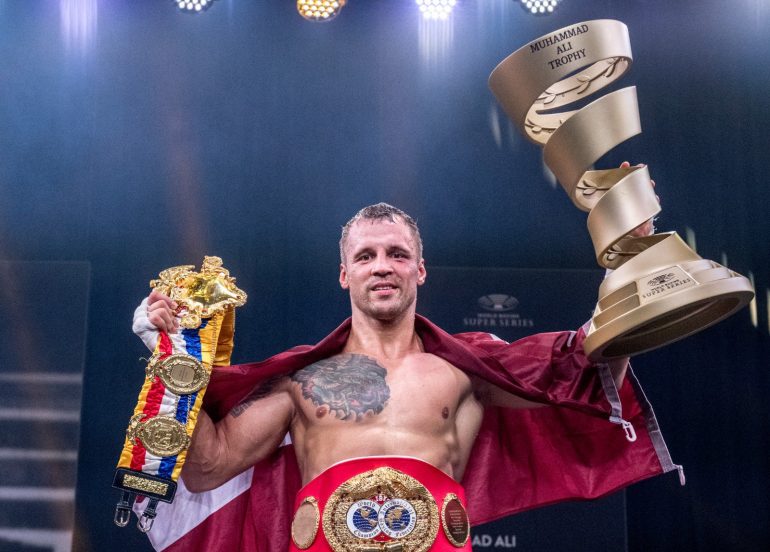 Latvia’s cruiserweight star Mairis Briedis, the newly-minted Ring champion, won the Muhammad Ali Trophy at the second time of asking as he outscored Cuba’s Yuniel Dorticos on Saturday in a German TV studio.

It wasn’t the final anyone imagined several months ago when it was due to go on in front of a sold-out crowd in Riga, but Briedis was a worthy winner this time.

He’d lost to eventual victor Oleksander Usyk on a majority decision in his first crack at the WBSS crown in Season Two.

Dorticos was looking for his big right hand early, while the tournament’s top seed Briedis (27-1, 19 knockouts) had some success with his left near the round’s end.

Both tried to work behind the jab in the second round and they cranked up the intensity near the end of the session as they tried to land big shots. Dorticos was often on the front foot, but Briedis was still effective, and in the third, he snapped the Cuban’s head back with left hooks and right hands.

It was a lively round.

In the fourth, Dorticos (24-2, 22 KOs) absorbed some crunching rights, but landed one of his own and the Latvian favorite had to briefly hold with his back to the ropes.

The contest settled down in the sixth though Briedis landed a peach of a right uppercut near the end of the session.

It was a sign of things to come. The Latvian landed more heavy artillery in the seventh and the Cuban was retreating into his shell.

Dorticos threw more right hands in the eighth, but the compact Briedis kept his hands high and remained a hard target to nail cleanly.

This wasn’t another World Boxing Super Series Fight of the Year contender, but it was tough going for both and it threatened to catch fire several times. Briedis landed a tremendous overhand right in the ninth round. In the 10th, he slowed the Cuban with some firm bodyshots. He was making Dorticos pay when he missed, too.

The Cuban remained game, however, and still looked for his vaunted right hand but the more desperate he became, the more predictable his output was; he was looking for that one shot.

Meanwhile, the 35-year-old Latvian looked positively fresh, smoothly moving side-to-side and one way, and then the other, through 12. With a minute to go and Dorticos clinging on to his IBF title, it was the Latvian who pushed harder for the victory. The Cuban kept coming forward, but was peppered on the way in by jabs and occasional rights. Though his face was swollen and lumpy by the end, he held his hands aloft at the bell in vain.

“Thanks to everyone watching back in Latvia,” said Briedis. “I hope I’ve made you proud.”