Josh Taylor blasts out Apinun Khongsong in one round, targets Jose Ramirez 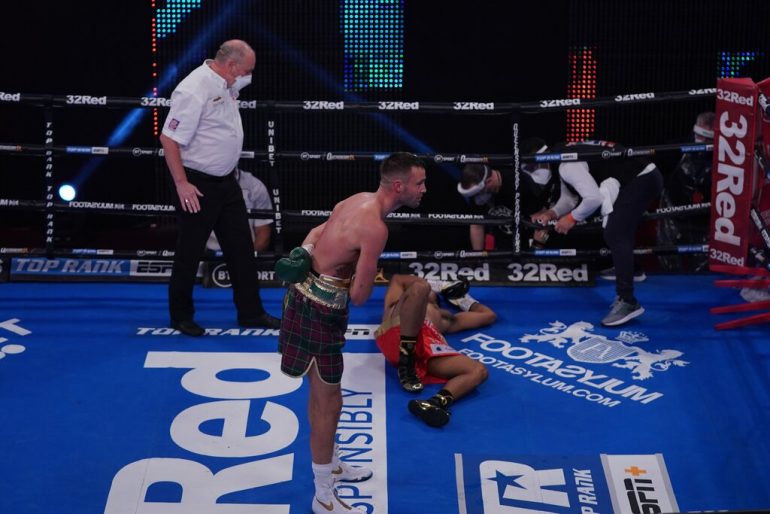 It’s skills that pay the bills.

Thailand-based power-puncher Apinun Khongsong made a 6,000-mile voyage to the U.K. in pursuit of world title glory, but unified junior welterweight champion Josh Taylor didn’t waste any time in putting him in his place with a brilliant first-round body shot stoppage at the BT Sport Studios in London on Saturday. The official time was 2:41.

Taylor, who holds Ring, IBF and WBA titles at 140 pounds, was careful in the opening seconds because Khongsong carried the reputation of a fierce knockout artist. The Scotsman, however, has seen it all before, and following a period of reconnaissance he cracked the previously unbeaten Thai with a perfect and unbelievably short left hand to the ribs. Referee Phil Edwards completed the count and Khongsong was down for minutes.

“That body shot sank right in,” said Taylor (17-0, 13 knockouts) in his post-fight interview with BT Sport in the U.K. “He swings on the break with a hook or the uppercut and I seen that coming. I smothered him up, pushed him against the ropes, and as he threw the right hand, I hit him with the left hook. I knew that was a real good shot.”

Next up for Taylor, hopefully, is an undisputed championship fight against WBC/WBO counterpart Jose Ramirez. The one obstacle standing in the way of title consolidation is Englishman Jack Catterall, the WBO mandatory challenger, who is unbeaten in 25 fights with 13 KOs. In a recent interview with iFLTV, promoter Bob Arum insisted that Taylor-Ramirez would go ahead with or without the WBO belt at stake. It would be a shame for the matchup not to carry the undisputed distinction, but boxing politics is getting so insane that it’s barely worth the effort now. Just make the fights.

“I want Ramirez next,” said Taylor. “I wasn’t impressed with his performance in the [Viktor] Postol fight, and I believe I’ll whip his ass all day long. I haven’t seen anything from him that I haven’t seen before. I’ve never ducked anyone, but being honest, I would rather it happened when the fans are back because it’s a huge fight, one of the biggest fights in boxing. A fight of that magnitude would be better with the fans there, either on these shores or in America.”