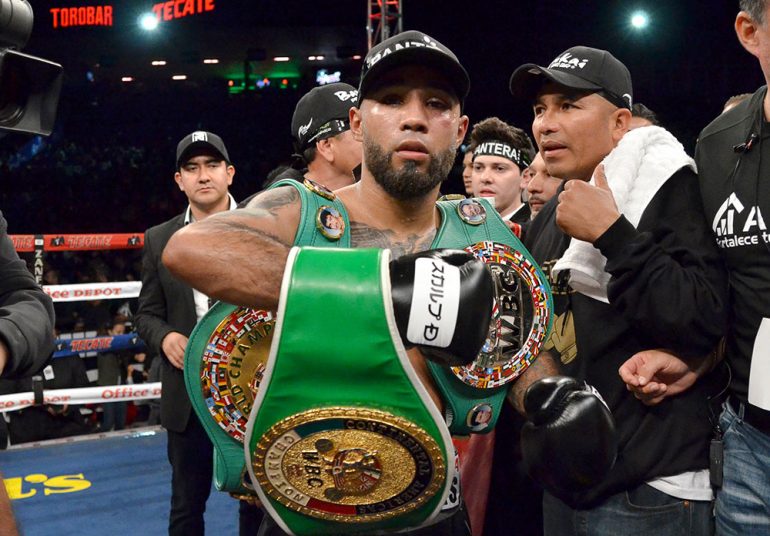 Luis Nery understands he cannot erase the past, but he can learn and move forward with his career.

Despite setbacks that include testing positive for a banned substance and struggling to make weight, Nery is setting his sights on winning another world title belt in a new weight class.

The hard-hitting Nery will face Aaron Alameda Saturday night at the Mohegan Sun Casino in Uncasville, Connecticut. The 12-round fight will be part of the huge and anticipated Showtime pay-per-view telecast (7 p.m. ET/ 4 p.m. PT) featuring Jermall and Jermell Charlo defending their world title belts in separate bouts.

With no fight lined up due to the COVID-19 pandemic, the southpaw Nery has stayed active in the gym. While he is glad a fight was made before 2020 ended, Nery also need time to spend with his family.

“The pandemic has not really affected me a lot,” Nery told The Ring in a phone interview this past weekend. “I’ve just stayed in the gym and worked. It’s been as normal as could be despite the limitations of sparring. I’ve stayed active, but I’ve spent a lot of time with my family. That’s what has been important for me during these times.”

Saturday’s clash against Alameda will be an all-Mexico clash between unbeaten fighters. Alameda (25-0, 13 KOs), who is originally from Nogales, Mexico and now resides in Long Beach, California, is also a southpaw, but has not faced the level of opposition Nery has faced in his career. In his last bout on April 27 of last year, the 27-year-old knocked out Jordan Escobar in round 3.

Nery is an overwhelming favorite going into the fight, but is not overlooking Alameda.

“He has that desire,” said Nery, who is also promoted by Zanfer Promotions. “That’s enough in itself to make him a dangerous opponent. He has the desire to win, which if he’s motivated, could work in his favor. I’m focused on him for Saturday’s fight. Nothing else is on my mind but Aaron Alameda.”

The 25-year-old’s reputation of being an aggressive, all-action fighter took a significant blow in August 2017 after knocking out Shinsuke Yamanaka to win the WBC bantamweight title. Over a week later, it was announced Nery tested positive for the performance-enhancing drug Zilpaterol in a pre-fight test, prompting the WBC to strip Nery of the title, although the win remained on his record.

In the Yamanaka rematch in March 2018, Nery failed to make weight the day before, weighing in three pounds above the bantamweight limit of 118 pounds. Yamanaka agreed for the fight to take place, but was stopped in round 2. Because Nery did not make weight, only Yamanaka was eligible to win the title.

Earlier this year, Nery hired trainer Eddy Reynoso, who is best known for training Ring Magazine champion Canelo Alvarez and now heavyweight contender Andy Ruiz. Nery believes having Reynoso in his corner will further give him more structure when it comes to training regiments and maintaining weight before a fight.

“Having someone like Eddy Reynoso is very important because of the discipline he instills in the gym,” said Nery, who made his pro debut in May 2012. “I’ve improved my skill-set and defense, especially with utilizing more lateral movement.

“I also had to deal with what happened in the Yamanaka fights. I learned my lesson because I owe it to the fans to be at my best and do things the right way. I’m sorry for what happened as I’ve bettered myself as a fighter and as a person.”

Nery hopes a win would lead to unification fights against the other world titleholders at 122 pounds. He also wants to add to the long, rich history of great world champions from Mexico and has looked up to fighters like fellow Tijuana resident and world champion Erik Morales.

Nery believes he is at his peak and is confident he could even win more world titles at 126 pounds.

“My goal is to always work hard and give it my all. I want to be part of Mexican history of great fighters, like Salvador Sanchez and Julio Cesar Chavez.

“I think I’ve made the transition well to 122 pounds and who knows. Maybe I can do well and win world title belts at 126 pounds. First is to unify, but I have to defeat Alameda on Saturday. Whether it’s for a vacant title or if Alameda had the title, it’s still a world title fight. My goal is to win and win impressively.”