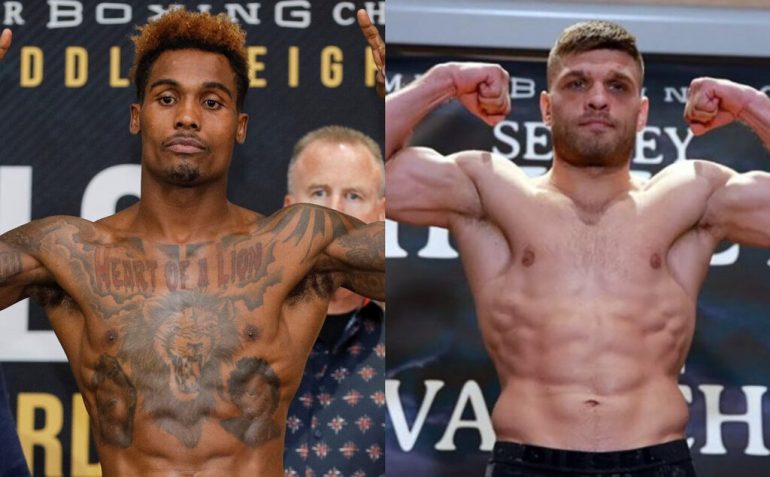 The hard-hitting Jermall Charlo will put his WBC middleweight title on the line against what is arguably his most dangerous opponent to date, Sergiy Derevyanchenko, at the Mohegan Sun Casino in Uncasville, Connecticut on Saturday.

Charlo, who is rated No. 3 by The Ring at 160 pounds, impressively ripped the IBF junior middleweight title from Cornelius Bundrage in three rounds in 2015. He made three defenses, including an impressive knockout of the previously unbeaten Julian Williams, before moving up to middleweight. The 30-year-old claimed the WBC interim belt before being upgraded to full titleholder when Canelo Alvarez was given the designation of “franchise champion” by that organization. (Editor’s Note: The Ring does not recognize the WBC franchise title.)

Derevyanchenko, who is rated No. 6 by The Ring, was a highly decorated amateur who represented the Ukraine at the 2008 Olympics in Beijing and claimed bronze at the World Championships the year before. Since making the transition to the professional ranks he has scored wins over Sam Soliman, Tureano Johnson and Jack Culcay. Derevyanchenko is 0-2 in world title fights, however, losing razor-thin decisions to Daniel Jacobs and Gennadiy Golovkin.

Will the rangier Charlo (30-0, 22 knockouts) be able to use his six-inch reach advantage to keep Derevyanchenko honest? How will the American react if Derevyanchenko (13-2, 10 KOs) is able to get inside and use his physicality? The Ukrainian is a habitually slow starter, so will he be able to get out of the gate faster and become a world titleholder at the third time of asking? Will the pressure of being the lead fighter on a PPV broadcast become detrimental for Charlo? 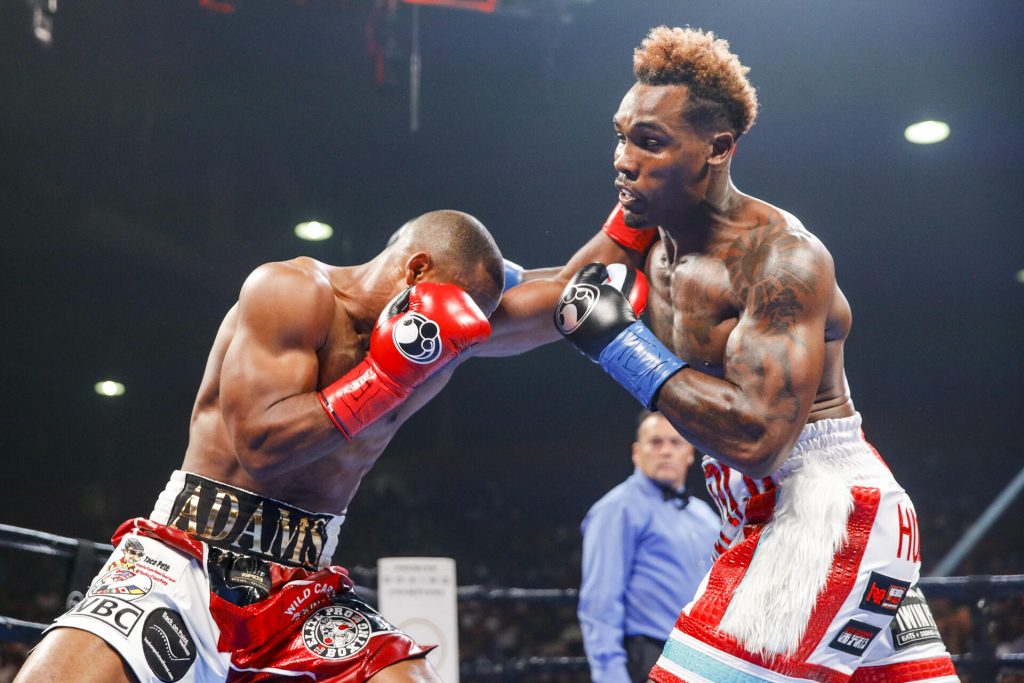 TOM GRAY: CHARLO UD
“I was initially going to roll with Derevyanchenko, but I’ve changed my mind. Timing is everything in this game and Derevyanchenko gave so much of himself in losing efforts against Jacobs and Golovkin. I just don’t think he can get the best out of himself for this fight and it will come down to right time-right place for Charlo, who’s an excellent fighter with a lot of tools.”

ANSON WAINWRIGHT: CHARLO UD
“Currently we don’t know for sure who is the better of the twins. I suspect Jermall, but Derevyanchenko is his acid test. Derevyanchenko is a top middleweight and he gave Jacobs and Golovkin all they could handle and then some. He had to get off the canvas in the first round in both fights, and the slow start ultimately cost him. He can ill afford a similar setback in this fight. Charlo may catch Derevyanchenko early, he may score a knockdown or two along the way, but unless Derevyanchenko has left something in the ring in his two previous title challenges, I think it he goes the distance. Charlo will be a step ahead and edge an excellent fight on the scorecards.”

LEE GROVES: CHARLO SD 12
“This is a difficult fight to call, for Derevyanchenko is capable of setting a hard pace that Charlo would be hard-pressed to handle and he’ll likely be the man moving forward, but Charlo boasts enormous shot-for-shot power and he still has the confidence of an undefeated fighter. Two factors will sway the fight Charlo’s way: First, he’s the better defender and Derveyanchenko has tasted a concerning percentage of his opponents’ power shots as of late. Second, Charlo’s accuracy compensates for his lack of volume, and Derevyanchenko has been dropped in two of his last three fights. It won’t be easy, for Derevyanchenko is likely getting his final crack at world honors and will fight like it, but Charlo, I believe will emerge with the points victory.”

RON BORGES: DEREVYANCHENKO SD
“Third time is the charm for Derevyanchenko after losing close decisions in title fights vs. GGG and Jacobs, the latter a split decision. He was dropped in the first round of both of those fights and won’t make that mistake a third time. Winning a decision in Connecticut won’t be easy but this time the judges give him not only his due but the WBC middleweight title. But not by much.”

MARTY MULCAHEY: CHARLO KO
“While not impossible to tell them apart, inside the ropes Jermall is the harder hitting of the duo despite paying more attention to defense even in search of the knockout. This will serve Charlo well with an aging, but still dangerous, Derevyanchenko who displayed determination in two title shots he lost by slim margins. Bottom line, at 34 and only having had 15 total fights, Derevyanchenko does not have the reflexes or one punch power to stop Jermall from dictating the action. This time Derevyanchenko does not overcome a slow start to bravely rally and is taken out by Charlo in the sixth to eighth round.”

MICHAEL MONTERO: CHARLO TKO
“On paper, this is a true 50-50 matchup. But Derevyanchenko is coming off 36 tough, hard-fought rounds against Daniel Jacobs, Jack Culcay and Gennady Golovkin. The Ukrainian absorbed well over 500 punches and was dropped twice in those three bouts. What does he have left? Charlo had issues with Matvey Korobov a couple years ago, but he’s a decent-sized middleweight southpaw. Against Derevyanchenko, Charlo will have noticeable height, reach, speed and power advantages. I favor Charlo by mid-late rounds stoppage.”

MICHAEL WOODS: CHARLO PTS
“It will seem like a bad dream for Derevyanchenko. He will win rounds against the favored A-side, as he did against Jacobs and Golovkin, but he will again see the other guy have his hand raised. Fight fans, decide now how good you think Derevyanchenko is, because Jermall won’t be pleased if he wins 7-5 or so, then sees people on social media saying, “Whatever, Derevyanchenko is almost 35 years old.’”

NORM FRAUENHEIM: DEREVYANCHENKO UD
“Derevyanchenko is called ‘The Technician’ for a reason. Many reasons. Jermall Charlo figures to see all of them in what looks to be a stylistic problem for the middleweight champion, who is unbeaten, yet has not faced anybody the caliber of Golovkin and Jacobs. Derevyanchenko has, losing debatable decisions to both. There’s a better argument that he beat GGG in 2019. GGG might be fading, but he still has power, more of it than Charlo. If the multi-skilled Derevyanchenko can elude and neutralize GGG’s feared power for 12 rounds, he’ll do the same against Charlo.” 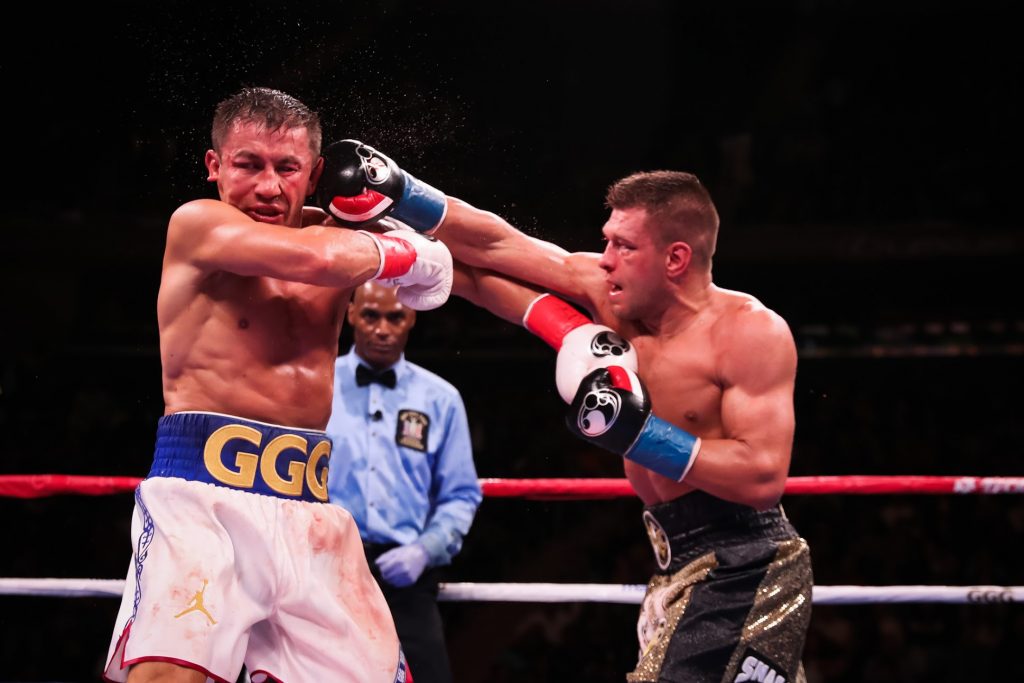 DUKE MCKENZIE (FORMER THREE-DIVISION TITLEHOLDER/ TV ANALYST): CHARLO TKO
“Don’t blink as this promises to be explosive. We know Charlo is heavy handed, and I feel that Derevyanchenko will play into his hands, quite literally, with his pressure fighting. Charlo wins impressively inside 10 rounds.”

MARC RAMSAY (TRAINER): CHARLO UD
“Derevyanchenko is probably one of the best boxers without a world belt right now. He’s not a huge puncher, but he’s a very good technician, and he has the capacity to adapt in the ring. He showed against Golovkin and Jacobs that he can definitely be very competitive with the best of the division, but there is a big difference between being competitive and wining those bouts. Charlo by close unanimous decision.”

JOLENE MIZZONE (MATCHMAKER, MAIN EVENTS): DRAW
“The reason for this pick is Derevyanchenko fought Jacobs and Golovkin and I think that took a lot out of him. I’m not sure he is going to be the same. With that said, I think he will be about 80 percent. I think Charlo will have problems with that 80 percent, and I think you will see very close rounds in this fight.”

ALEX STEEDMAN (COMMENTATOR): CHARLO PTS
“This is a solid test for Charlo because Derevyanchenko always comes to fight. He pushed Danny Jacobs and GGG all the way despite early knockdowns in both fights. And the Ukrainian gave up similar height and reach disadvantages against Jacobs. But at 34, and after three hard, 12-round fights, this might be a good time for Charlo to get him. Charlo has the skills to get this done by decision.”

JOHN SCULLY (TRAINER): CHARLO PTS
“I like Charlo to win via decision. Derevyanchenko is an exceptionally tough out, but the timing is right for Charlo, and after some rockier moments than he is used to, I think he will come away with a close decision victory.”

KALLE SAUERLAND (PROMOTER, SAUERLAND EVENT): DEREVYANCHENKO PTS
“I see it as a very close, tough fight. I see Derevyanchenko coming away with the upset on a close points decision.”

TOM LOEFFLER (PROMOTER, 360 PROMOTIONS): CHARLO PTS
“Derevyanchenko fought the best fight of his career against GGG but he got dropped and took punishment for 12 rounds. I think that going 12 rounds with GGG could have taken something out of him, but he got valuable world-class experience and will keep coming forward against Charlo. I expect Charlo’s speed to be the advantage here, and he should win a competitive 12-round decision.”

MAX ALPEROVICH (MANAGER): DEREVYANCHENKO UD
“Derevyanchenko is on a different level, both boxing and experience wise. However, he starts off slow and is vulnerable in the first two rounds. If he gets past the early stages, he outboxes and outclasses Charlo for an easy decision.”

SERGIO MORA (FORMER WORLD TITLEHOLDER/ COMMENTATOR): CHARLO PTS
“Charlo will have his hands full. I can see him getting hurt and facing adversity but not losing. Charlo close decision over Derevyanchenko.

WAYNE MCCULLOUGH (FORMER WORLD TITEHOLDER/ TRAINER): CHARLO TKO
“Tough fight. Sergiy’s body work is impeccable and he can keep going for 12 rounds at a high pace. He can get inside, as he showed against GGG, and hurt his opponents. Jermall has a good jab, which he will need in this fight to keep Sergiy at a distance. His right hand behind a good jab could catch Sergiy when he tries to get inside, therefore he might get a knockdown or two. If Sergiy can stay inside he might get the upset, but I think Jermall will have the slight edge in punch power in this fight. He will catch Sergiy in the later rounds and could force a stoppage around rounds nine or 10.”

TONY TOLJ (MANAGER): CHARLO SD
“I think this will be a cracking fight. Sergiy can fight and his two loses against Jacobs and GGG could have gone either way. Jermall is undefeated for a reason, and he’s nearly five years younger, which factors into everything. I’m picking Jermall Charlo by a close split decision.”

“Derevyanchenko is on a much higher level and has faced many superior opponents. He is also more durable and better conditioned. Derevyanchenko will win a unanimous decision.”