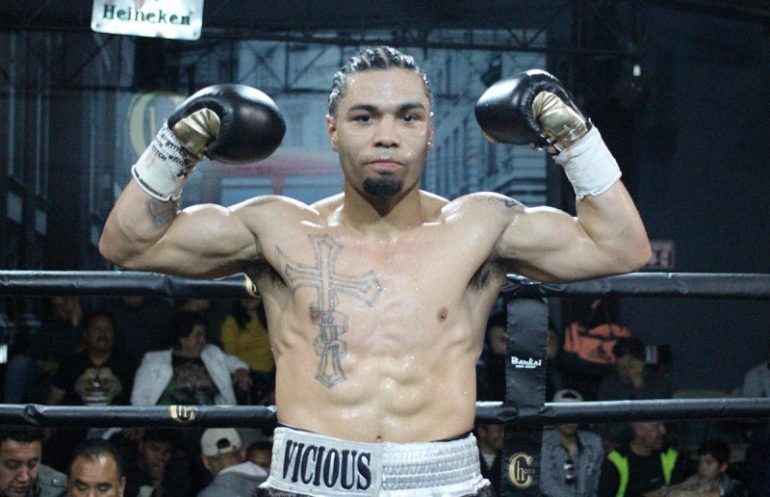 There are levels to the fight game and Victor Pasillas insists that he is more than ready to take the next step up in opposition.

If he had his way, Pasillas’ next fight would be for a world title belt at either 122 or 126 pounds.

First, however, Pasillas will face Ranfis Encarnacion of the Dominican Republic in a clash of unbeaten prospects on Wednesday at the Microsoft Theatre in Los Angeles. The 10-round bout will precede the main event between unbeaten lightweight Nestor Bravo and Jose Luis Gallegos.

Pasillas (15-0, 8 knockouts), who was born and raised a few miles away in East Los Angeles, last fought on August 24 of last year, knocking out veteran Ernesto Guerrero in the opening round. The southpaw fighter will face a decent test in Encarnacion (17-0, 13 KOs), who has displayed more power and aggression in recent fights, stopping five of his previous six opponents.

The 28-year-old understands the challenge at hand, but believes he is ready to handle anything Encarnacion throws at him.

“I feel this is going to be a great fight for me,” Pasillas told The Ring. “Dominican fighters are tough and hit to hard and Encarnacion is not going to be an exception. I know he’s going to bring the best out of me. I believe I’m more than ready for these type of fights. This is like Six Flags (amusement park) for me. I’m excited to face what lies in front of me on Wednesday night. It’s like I’m first in line for an action ride.”

Pasillas made his pro debut in December 2011 after signing a promotional deal with Top Rank. He would fight 11 times for the Las Vegas-based company before being released in 2016. That setback resulted in a two-year layoff, but he eventually returned to action on fight cards in San Antonio and Tijuana.

Pasillas understands Top Ranks’ business decision but hopes to prove that it was the wrong decision.

“I was happy to be with Top Rank, but I was getting swing bouts,” said Pasillas. “I felt like I was getting the short end of the stick. (Top Rank matchmaker) Brad Goodman would come to me [a few days before a fight] and say that people didn’t want to fight me or that seven opponents pulled out before they finalized an opponent. I don’t think fighters like Vasiliy Lomachenko and Jesse Magdaleno had that problem.

“I want a promoter that wants me,” continued Pasillas. “They’ll get behind me as if I was an A-class fighter. Top Rank is cool and I don’t have anything personal against them. I believe that I’m a golden nugget and a diamond in the rough. I think they’re missing out on the real Victor Pasillas. PBC wants me for who I am.”

Pasillas hopes a win over Encarnacion will open more opportunities for him. He is willing to fight as low as 122 pounds or as high as 130.

Despite his lack of experience (this will be his first scheduled 10-round bout), Pasillas is counting on landing a big fight soon.

“My goal in every fight, including this one, is to not look past my opponent,” said Pasillas. “I’m a really focused guy and humble. My thing is, I’m 28, and I’ve been boxing since I was eight years old. I don’t have a lot to show for it as a pro. I believe I deserve the big-money fights. I’m willing to overcome any and all obstacles. I believe boxing needs someone like me.

An impressive victory over Encarnacion would certainly put Pasillas on the right road.

“I really feel comfortable at 126 pounds,” he said. “I don’t want any more eight-round fights. I want to fight the top contenders at 122 and 126 pounds. The lower the caliber of opponent, the less the challenge for me. I want to earn my way to the top.

“A win over Encarnacion will indeed get me one step closer to fighting for a world title belt.”