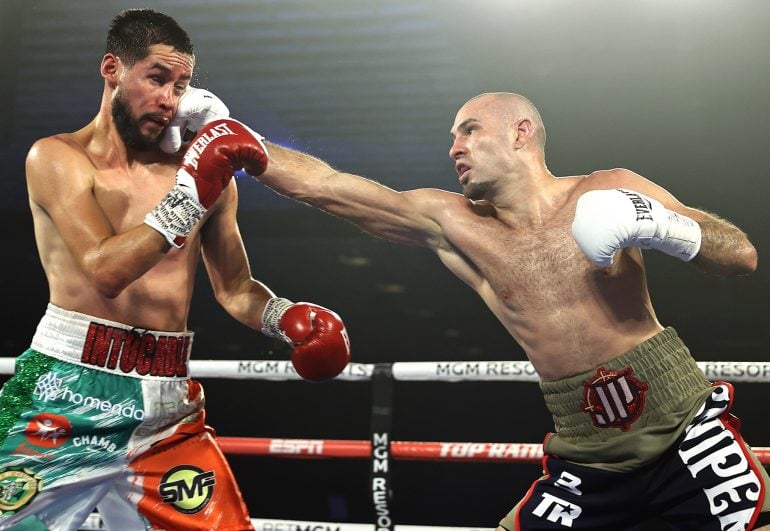 It appears Jose Pedraza is here to stay as a junior welterweight.

The former two-division titleholder notched his second consecutive win at 140-pounds, this time with a wide unanimous decision against Javier Molina.

Judges Julie Lederman and Patricia Morse-Jarman each scored he fight 98-92, while Tim Cheatham had it 99-91, all in favor of Pedraza in a battle between 2008 Olympians in an ESPN+ streamed main event Saturday evening at the MGM Grand Conference Center in Las Vegas.

From the onset, Pedraza was in control of the fight, flicking his jab, and not allowing Molina to set up counter opportunities on the inside.

The power behind Pedraza’s jab was evident in round two, as swelling developed under Molina’s left eye.

One of those butts caused a deep cut along his nose and outside of his left eye. Pedraza continued to march forward, and it was headbutts galore in round three as the former 135-pound titleholder landed with his dome some more.

Pedraza also fought through a bloody nose as the fight reached the halfway point. He walked down his Puerto Rican counterpart with solid right hands.

In the seventh round, Pedraza wobbled Molina with a right hook from the southpaw stance, but although he quickly recovered, his corner urged him before the start of the ninth round that he needed a knockout to win the fight.

But the 31-year-old Pedraza (28-3, 13 KOs) never allowed Molina to come close, utilizing a steady jab to keep him at bay.

With the victory already in the bag, Pedraza pursued an emphatic ending. He didn’t get it, but the effort was there. A clean straight left hand rocked Molina back into the ropes with less than a minute remaining in the bout. Pedraza poured it on, but it wasn’t enough to close the show.

Molina saw a four-bout win streak snapped with the loss, who dropped his first contest since January 2016 to welterweight contender Jamal James.

Pedraza has won two in a row following an upset 10-round decision defeat to Jose Zepeda last September.