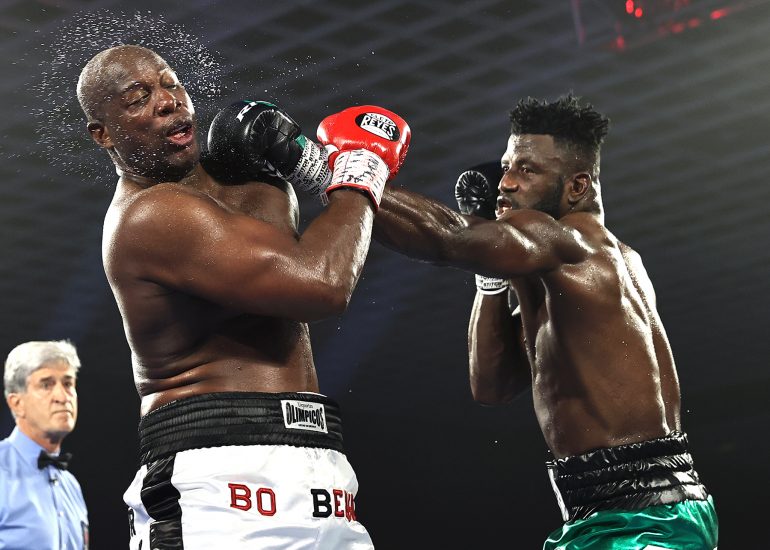 Efe Ajagba got the win, but failed to make a statement in his first fight with his new promoter, Top Rank.

Ajagba remains perfect as a pro, but it was far from an impressive performance, as he claimed a 10-round decision over Jonnie Rice in their ESPN+ streamed affair Saturday evening at the MGM Grand Conference Center in Las Vegas.

Judge Max De Luca scored the fight 98-92, while Adalaide Byrd and Dave Moretti had it 99-91, all in favor of Ajagba.

Ajagba rocked Rice with an overhand right in the second round after landing a stiff jab.

Ajagba (14-0, 11 KOs), who represented Nigeria in the 2016 Olympics, went back to the basics in round five after getting caught in the previous frame with precise counterpunches, utilizing a steady jab.

The pace of the fight stalled for the next several rounds, until Rice, who trains out of the Las Vegas gym of former 122-pound titlist Clarence “Bones” Adams, scored his best punch of the fight, a counter right hand.

Instead of following up on his newfound momentum, Rice (13-6-1, 9 KOs), was unable to follow up with anything of note.

Ajagba doubled up on his jab in the final frame and kept Rice at bay to go the distance.

The 33-year-old journeyman Rice suffered his second consecutive loss, while Ajagba went the distance for the second time as a professional.

Robeisy Ramirez delivered in his most impressive performance to date.

Judge Julie Lederman scored the fight 79-73, while Tim Cheatham and Lisa Giampa each credited Ramirez with shutout scores of 80-72.

2020 has treated Ramirez well, who has gone undefeated in four fights, including a unanimous decision victory in a rematch over Adan Gonzales, who spoiled his pro debut, knocking him down in the first round.

Since that night, Ramirez has been on an absolute tear. 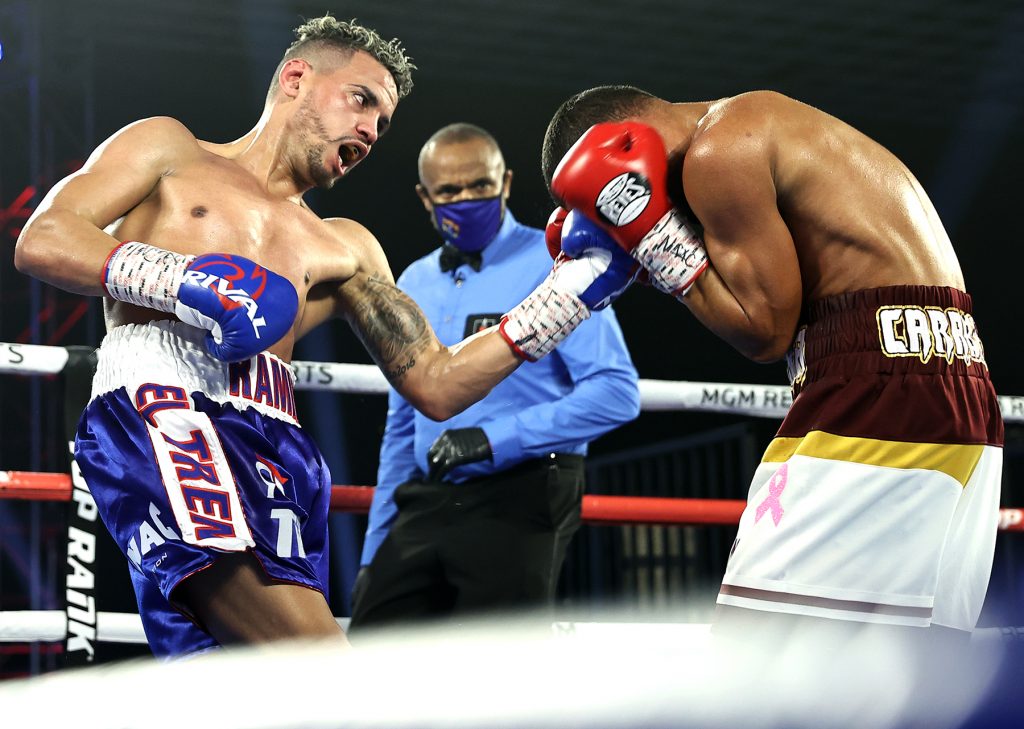 The 26-year-old southpaw Ramirez peppered Puerto Rico’s Caraballo with jabs in the opening round frame.

Referee Robert Hoyle warned both fighters for leaning with their head, which is typical when there is a matchup between a southpaw and an orthodox fighter.

Ramirez backed up Caraballo (13-3-2, 9 KOs) with a stiff straight left hand in round five. Towards the end of the round, Ramirez rocked Caraballo with a series of punches but failed to capitalize on his wounded opponent.

Ramirez went on to coast the rest of the way, picking up his second straight victory by decision.

An entertaining 154-pound contest saw Leo Ruiz remain undefeated as a pro with a six-round unanimous decision over Rodrigo Solis.

But it was a busy night for referee Russell Mora, who took points away from both combatants for several fouls. Ruiz was docked in round five for low blows, while Solis lost a point for intentionally spitting out his mouthpiece after he was hurt from a big left hook upstairs.

Infractions or not, Ruiz, a Mexico native based in San Bernadino, California, was clearly in control of the fight. He connected with combinations early, before mixing in the left hook at the halfway point.

For the second time in as many fights, Christian Montano was forced to go the full distance.

But the 168-pound prospect from Houston, Texas, remained undefeated with a six-round unanimous decision over Ryan Adams.

Both fighters spent much of the fight trying to impose their will on the other, though it wasn’t until round 4 when Montano hurt Adams. The 21-year-old went for the kill but appeared to punch himself out, as he appeared winded for the remainder of the bout.

Bryan Lua had not fought in two years, and it took him only two rounds to score his third consecutive victory by knockout.

Injuries had kept Lua (6-0, 3 knockouts) out of the ring since May 2018. But the 22-year-old of Indio, California, took out his frustration on Luis Norembuena, who was knocked out in the second round of their scheduled four-round 135-pound contest. Lua connected with a clean left hook that annihilated Norembuena at 2:27 of the second frame.

Norembuena accepted the fight on short notice, but Lua made quick work of him, rattling the Chilean pugilist with right hands. In the second round, Lua capped off a solid performance with the left hook that flattened Norembuena (4-7-1).

For the second consecutive fight, a 17-year-old was making his first pro ring adventure, but Jahi Tucker made a painful statement.

Tucker pounded away Deandre Anderson to get the first-round stoppage. A flurry of punches left Anderson looking like a deer caught in the headlights, forcing referee Robert Hoyle to step in at 2:56 of the opening frame.

Anderson, a 23-year-old southpaw from Birmingham, Alabama, came out reckless, coming at Tucker with wild punches, and leaving himself open to get whacked, which Tucker, of Long Island, New York, took advantage of to kickoff his boxing career in style.

Kasir Goldston’s introduction to professional boxing was a successful one.

Goldston, who accumulated an amateur record of 109-8 but lost out on a spot at the 2021 Olympics in Tokyo following a defeat at last year’s Olympic Trials in Lake Charles, Louisiana, earned a four-round unanimous decision over Isiah Varnell.

It was a one-sided fight from the onset as Goldston utilized his superior combination punching abilities to outbox Varnell.

The 17-year-old native of Albany, New York, also mixed up his punches well, adding in right hooks to the body for extra measure.