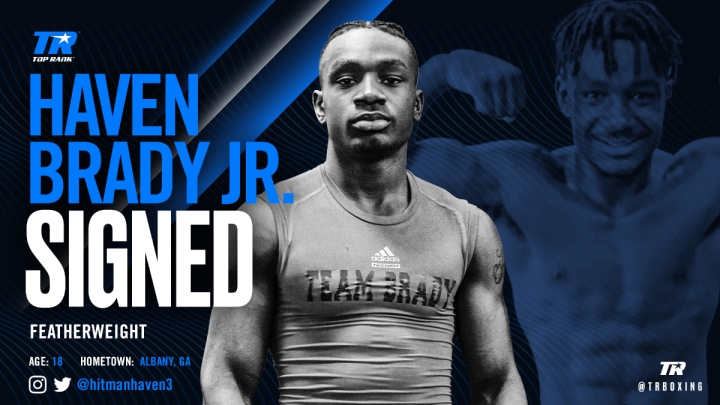 The 18-year-old from Albany, Georgia will make his pro debut in a four-round featherweight bout against an opponent to be determined on the undercard of the junior welterweight bout between contenders Ivan Baranchyk and Jose Zepeda (ESPN+, 7:30 p.m. ET/ 4:30 p.m. PT).

Brady is the latest amateur standout to sign a promotional deal with Top Rank, who has had the reputation of developing top Olympians or prospects into contenders and world titleholders. This past summer, Top Rank has signed the likes of Javier Martinez, Duke Ragan and Omar Rosario.

Brady is thankful for the opportunity Top Rank has provided to him.

“Top Rank has afforded me a great opportunity,” said Brady. “It’s a pleasure to fight under the Top Rank banner and I’ll never let them down. I’m a power puncher. When my opponent doesn’t go, I can use my boxing skills. Whatever an opponent presents, I can adapt to any style.”

Brady also excels outside the ring. A 2020 Westover High School graduate, he graduated from Albany Technical College with an associate degree in business management. He maintained a 3.5 grade point average (GPA) in his high school and collegiate studies.

Brady trains at Soul City Boxing in Toledo, Ohio under the guidance of Otha Jones II and Roshawn Jones, and alongside undefeated prospects Isaiah Steen and Otha Jones III. Brady is confident that he can make a name for himself in the 126-pound division.

“I want to be a great fighter, someone that everyone remembers,” he said. “Most importantly, I strive to be a role model for the youth.

“I’m excited to fight on ESPN+ in my pro debut. I can’t wait to show the fans my talent. There’s a new fighter to watch in the featherweight division.”