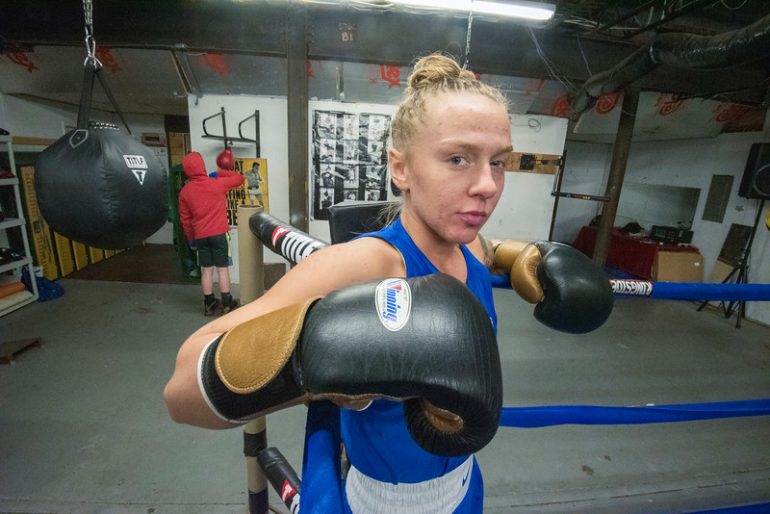 Father/son combinations are commonplace in the Sweet Science but mother/daughter? Not so much.

While her Olympic odyssey ended in disappointment, Kreps is ready to become the latest female boxer to make a splash in the professional ranks.

“My mother was a fighter and I was just around the gym at a young age,” she recalled.

Deborah Fields-Kreps was around 30 years of age when she put on her first pair of gloves. A career nurse, she looked to boxing as a means to get in shape.

Instead, it turned into a natural desire, once which led “The Knockout Nurse” Kreps to three Golden Gloves titles and three Empire State Games championships, inspiring her daughter along her journey to box herself.

However if you think that is where the pugilism started, think again. Boxing has been in the family blood for generations.

Kreps’ grandfather Frankie Eagan was a pro fighter. In a six-year career spanning from 1933-1939, the welterweight posted a record of 30-9-5 with six knockouts.

“It’s safe to say that boxing runs deep in our veins,” Kreps said.

Following a heartbreaking loss in the Olympic Trials, Kreps, the third-seed at 125 pounds, has shifted her focus to her professional debut, which is set to take place October 9, in Kissimmee, Florida, at the bantamweight limit of 118 pounds.

However Kreps is not expected to campaign at that weight in her second pro contest.

“We were originally campaigning at 115 pounds but just in case anything with the opponent changes, we have a few pounds of leeway to work with.”

Her opponent has yet to be announced.

Despite the COVID-19 pandemic, women’s boxing has exploded over the last nine months, with junior lightweight Mikaela Mayer headlining her own card, as well as former undisputed welterweight champion Cecilia Braekhus.

Kreps, who had around 75 amateur fights, is not just gunning to win a belt; she wants to earn her spot in the record books.

“One-hundred percent, I believe that I have all of the qualities to become a superstar,” she stated. “Once I have my pro debut, I believe I will climb up the rankings very quickly.

“I’m definitely going to make my mark in women’s boxing for sure.”

Of the fighters who have been instrumental in paving the way for the rising popularity of women’s boxing, Kreps mentioned two by name.

“Those two are the reason women’s boxing has gained so much traction over the last few years. I’m ready to be a part of it.”