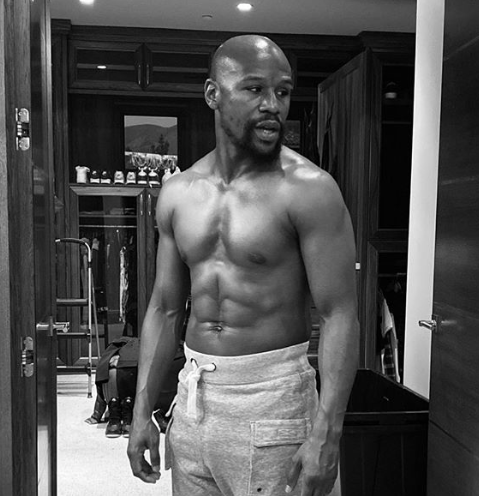 Still looks to be in fighting shape, doesn't he? Mayweather at 43+ hasn't let retirement affect his mid-section in the slightest.
17
Sep
by Michael Woods

CBD oil….lots of love for the CBD, that company must’ve cut a beefy check…..alert for a friend’s new album…homage to slain fighter Danny Gonzalez…another plug, for a Vegas burger joint.

Floyd Mayweather’s IG account is a busy place, with plugs taking up plenty of space, along with pics of “Money” in various gorgeous locales, and reminders to people that he got stacks. Scroll down far enough, and you see evidence of his ownership status in a peel palace, in Vegas.

There’s no reference, yet, to a forthcoming fight, against anyone, but that could change at anytime. Or, it could be status quo, with Floyd figuring out exactly what his regimen will be as a non-active pugilist, and continuing the sort of posting regimen we take in now.

Or he might decide he should do JUST…ONE…MORE, against YouTuber Logan Paul, who is 0-1 as a “pro fighter,” after losing to fellow YouTuber KSI in 2019.

The Mayweather comeback fight rumor got reported first, on the evening of September 12, by Mike Feinberg on The Fighting News.

TMZ has followed up, and according to that news/gossip behemoth, “(T)here have been rumblings about 43-year-old Mayweather stepping in to take on 25-year-old Paul … but we’re told it’s far from a done deal and right now Floyd is leaning toward “no.” 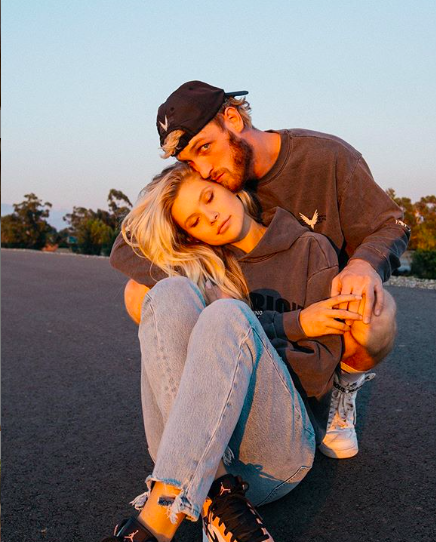 That could change, we suppose, if the reaction to this rumor launch is positive. And by “positive,” we don’t mean unanimity from respondents, that they love the concept and would gladly pay $100 to watch the spectacle. We mean, is there chatter, enough of it, and of the variety that makes any backer believe they could get their money back after laying out guarantees to Floyd and Paul? Remember, plenty of people will put down their money to see someone they don’t adore maybe get their ass kicked, and both Floyd and Paul have their fair share of haters.

Keeping ’em on the hook, that’s a Mayweather strategy. Oh, and by ’em, I mean us, the media, as well as everyone else who consumes social media. Mayweather knows we’ll be waiting for the other shoe to drop.

Entertainers of a certain ilk have known for a long spell that the best way to make them want you is to make yourself scarce. Now, that won’t work for everybody…Nobody is really chomping at the bit and begging Victor Ortiz to glove up and get back in the ring. But for a boldface name like Mayweather, he can tease us and hint at a comeback, and can rely on us taking the bait, and paying attention.

Part of that success stems from his excellence, of course, he is a lock-down Hall of Fame talent and should be somewhere on your all-time Pound For Pound list, arguably. And part of the persistent allure has to do with boxing not producing superstars that transcend the sport. Mayweather does, still, at 43+.

He last took part in a “real” fight on Aug. 26, 2017, when he carried Conor McGregor into the tenth round of their clash in Las Vegas, which claimed around 4.3 million pay per view buys, plus an untold number who watched on an off the books stream.

Mayweather got a payday doing an exhibition against kick boxer Tenshin Nasukawa on Dec. 31, 2018 though that mini chapter of his fighting career will be remembered by many as a goofy construct, which ended with the loser in the middle of the ring, crying, overcome with emotion after being stopped in round one of a three rounds or less contest.

Now, rumors are kicking up again.

Purists are gagging, maybe even throwing up a bit into their mouths. But it is what it is, and where we are. Floyd turns 44 on Feb. 24, and it’s a decent bet he doesn’t sign on for any type of fight that he doesn’t know he can win.

And no one get it twisted, he’d whup Logan Paul, beat the kid up in less than two minutes even if he had one arm tied behind his back.

Folks, this is the direction we are going in, and it’s a concession to the fact that the boxing niche has shrunken yet again, in the last five or so years, but also the cult of celbrity overall. Logan’s younger brother Jake Paul is supposed to be having a boxing match coming up soon … he’s said to be taking on ex-NBAer Nate Robinson on the undercard of the Mike Tyson vs. Roy Jones Jr. fight Nov. 28, but I have severe doubts that Tyson fight will actually take place, for the record.

Brit promoter Eddie Hearn picked up on it, and it’s a sad but undeniable fact–a fight featuring boxing neophytes who have a decent following on social media will gain more mass media attention, and buzz on social, than will even an A side vs. A side tango between two top ten pound for pounders. The Logan Paul vs. KS1 fight on Nov. 9, 2019, a SD6 win for KS1 at Staples Center in Cali, far and away overshadowed any of the seven other clashes on a card streaming on DAZN.

Devin Haney and Billy Joe Saunders in their most fevered dreams couldn’t gain that type of attention…unless they fought the Ohio native Paul, or “Money,” or some other person who can be featured on TMZ, and register with people other than hardcore boxing fans.

My three cents: I think there are a couple hurdles for Paul here, as we know he’d like the opportunity to get his ass kicked from here to Ashtabula for a nice check and a couple million more IG followers…

One, there aren’t as many platform possibilities to host this fight, and people to put up the backing, as there were a year ago. Depending on Floyd’s ask, that could spell doom for Floyd vs. Logan, as Floyd might figure if he’s going to fight again, he might as well wait until the COVID dust settles all the way down.

And two, you could sell McGregor as a “threat,” to too-prideful MMA fans. Selling Logan Paul, even if he gets on the sickest bulk cup regimen known to man, as a legit threat to win even a minute of a round, won’t be easy.

Then, again, you don’t have to look around too far or wide to know that people are as gullible and confused as they’ve ever been, perhaps, so maybe a tsunami marketing push could make Mayweather vs. Logan Paul sellable.

—Michael Woods has worked for NY Newsday, and ESPN The Magazine and is publisher of NYFights.com.