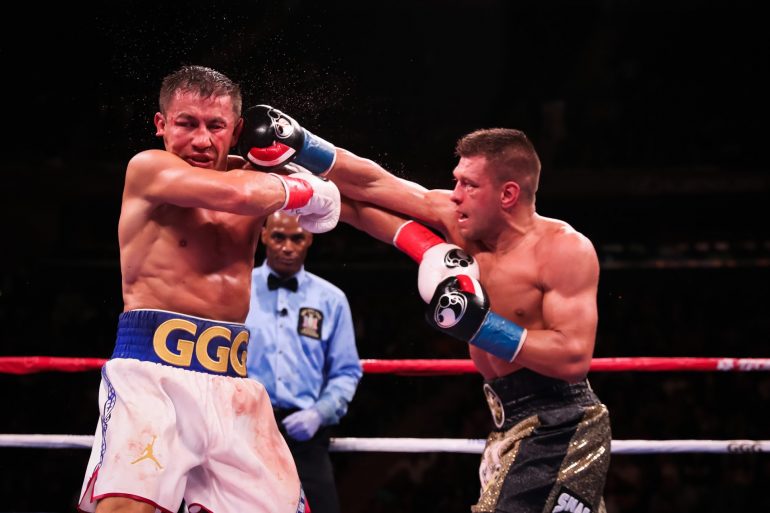 Twice before Sergiy Derevyanchenko has battled fiercely for a middleweight world title and both times he has come, oh, so close to achieving his lifelong dream, but to no avail.

First, there was a split decision loss to longtime stablemate and sparring partner Daniel Jacobs for the vacant IBF title at the Hulu Theater at Madison Square Garden in New York in October 2018. Jacobs scored a knockdown in the first round and went on to win 115-112 on two scorecards while Derevyanchenko got the nod 114-113 on the third card.

Derevyanchenko shook the tight loss off with a hard-fought but clear unanimous decision over Jack Culcay in a title eliminator in April 2019, which set him up for another shot at the once-again vacant IBF 160-pound strap.

He squared off with the fearsome puncher Gennadiy Golovkin last October, this time in the main arena at Madison Square Garden, and the two put on a tremendous show. It was a back-and-forth slugfest in which Derevyanchenko once again got knocked down in the opening round, but recovered to give Golovkin perhaps the toughest fight of his career.

In the end, Golovkin had his hand raised via scores of 115-112, 115-112 and 114-113 to become a two-time world titleholder. Many at ringside, however, and legions offering their opinion via social media thought Derevyanchenko had done enough to score the upset in what was a strong candidate for 2019 fight of the year.

If there was a silver lining to the defeat, Derevyanchenko fought well enough and made enough of a name for himself that here he is once again – ready to fight for another world title, this time for the WBC belt held by unbeaten Jermall Charlo.

The fight will headline the first half of a stacked Showtime PPV doubleheader that will feature six fights overall – with a 30-minute intermission following Charlo-Derevyanchenko – on Sept. 26 (7 p.m. ET, $74.95) at the Mohegan Sun resort in Uncasville, Connecticut, where the show will go on without spectators due to the coronavirus pandemic.

For Derevyanchenko the fight represents yet another opportunity to realize his dream of winning a world title.

“Of course, it means a lot,” Derevyanchenko said with assistance from his wife and translator Iryna. “I don’t think about this being the third try (for a world title). I am just focused on that I can get the belt after this fight. I am always prepared for every fight and it’s my dream all my life. Of course, it would mean a lot if I get the belt. If I get the belt I will be so happy. I will feel like Superman.” 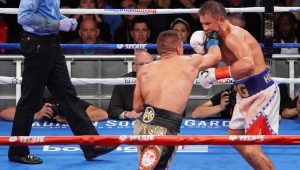 To get that Superman feeling, Derevyanchenko will want to avoid yet another early knockdown. It’s something that has been on his mind during training camp as well on the mind of trainer Andre Rozier.

“Of course, I understand that I need to be more focused in the first round,” Derevyanchenko said. “I know this and I am working in it. I need to make sure I focus for all 12 rounds. So me and Andre are talking a lot about this and working on it a lot.”

Said Rozier: “We worked hard on Sergiy’s capabilities and technique. We have a serious opponent in front of us. We’re going to train to be ready for a 15-round fight, so that we can rise to the occasion. There are going to be explosive bombs. May the best man win, but we’re planning to be the best man.”

So far, so good, it seems. How many times has it happened during camp?

“Just one time, so far. One time is enough,” Derevyanchenko said – in English — with a laugh.

Yes, he was disappointed with the losses to Jacobs and GGG, but more with the GGG defeat. He said he was not aggressive enough, especially after getting off to the slow start.

Manager Keith Connolly, the 2019 Boxing Writers Association of America manager of the year, would also like to see Derevyanchenko locked in from the opening bell to avoid a knockdown and giving the judges the impression Charlo is in control from the outset.

“I don’t want him going into the fight thinking too much about that and being gun shy, but it’s definitely in the back of his head and you want him to get off to a good start,” Connolly said. “He’s looking to be aggressive but also protect himself defensively and get out of the first round without getting dropped.

“But I don’t think he has to anything different than what he did in the Golovkin fight. If he can avoid the knockdown it will help, but he doesn’t have to change much from what he did against GGG. He fought a masterpiece against GGG. If he fights that kind of fight I think he beats Charlo.”

Nobody has yet, however, through two title reigns. Charlo (30-0, 22 KOs), 30, of Houston, is a former junior middleweight world titlist, who notched notable victories over Austin Trout (by decision) and Julian “J Rock” Williams (by fifth-round knockout) during his title reign, before moving up in weight and winning a middleweight belt.

“He has speed, he is good throwing combinations and when I saw his fights he definitely has a good punch,” Derevyanchenko said.

Charlo, whose twin brother Jermell Charlo will face Jeison Rosario in a three-belt junior middleweight unification fight in the headliner of the second half of the doubleheader, will be making his third middleweight defense. But Derevyanchenko looms as his most formidable foe so far in the division. 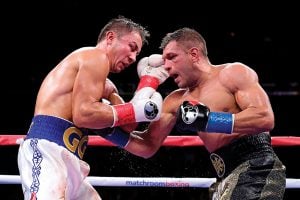 The way Derevyanchenko plans to do it is by doing what he did against Golovkin – letting it all hang out.

“I think I need to be more aggressive and use more pressure and work more in the middle of the fight and not just at the end,” Derevyanchenko said. “After the Golovkin fight I was a little bit sad but after a few weeks I thought about the fight and realized I have to work harder to pull off my dream. I learned from this fight and I know what to do.

“It’s not a big deal to lose a fight because I have a new opportunity. I am still working on things and I am still on my way to my dream to get the belt and to prove to everybody I really deserved it (against Golovkin).”

He was heartened, he said, by being recognized on the street in his adopted Brooklyn, New York, neighborhood and hearing kind words from those folks.

“After the fight a lot of people, even in the street, they came to me and talked to me and said I was really good and it motivated me,” he said. “It was really nice to hear. I showed to the people on TV and at Madison Square Garden that I am a good fighter. That’s the most important thing. That is more important than the judges.”

Ah, the judges. After two such close defeats left to a trio of judges at ringside, can he get a close decision, especially when his opponent, be it Jacobs, Golovkin and now Charlo, is the so-called “A” side of the fight? He said he is trying not to think about it.

Connolly figures if Derevyanchenko fights like he did against GGG, avoids the knockdown and remains as focused as he has been in training camp that he can emerge with the title.

“It would be unbelievable,” Connolly said. “Sergiy is such a humble guy, such a nice guy. If he does win the fight it would be a huge deal for him, for our whole team. He left Ukraine (in 2014). He left his life behind and moved to a new country to get these kinds of opportunities.

“It’s hasn’t been easy for him. He got to the top and put on two tremendous performances with Jacobs (whom Connolly also manages) and GGG, but he didn’t walk away with a belt. He can do it against Charlo and I would be so happy for him.”