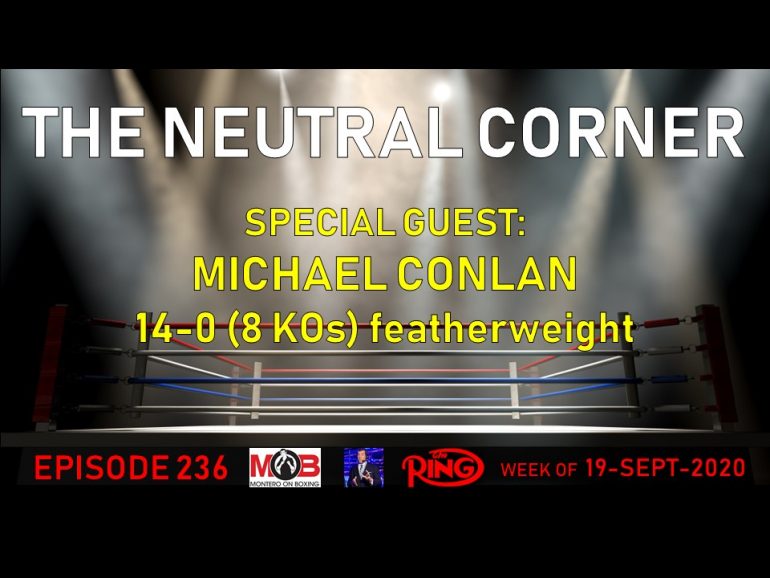 On episode 236 of The Neutral Corner boxing podcast, host Michael Montero was joined by undefeated prospect Michael Conlan (14-0, 8 KOs). The two-time Irish Olympian made it clear that his plans are to move down in weight next.

“I’m definitely moving down to 122-pounds,” he told RING. “I’ve been competing as a featherweight recently, but I started my career as a junior featherweight and can make that weight easily. I’m ready to go against any of the champions at 122 right now.”

Conlan, who competed as a flyweight at the 2012 Olympic Games and a bantamweight in the 2016 Games, is currently rated #2 by the WBO at 122-pounds. The current WBO junior featherweight world titleholder is Angelo Leo (20-0, 9 KOs), who was supposed to face Stephen Fulton (18-0, 8 KOs) last month for the vacant belt. When Fulton and his team tested positive for COVID-19, he was forced to withdraw from the bout, and Leo fought Tramaine Williams instead. The WBO has mandated a Leo-Fulton fight next. Conlan would love a crack at the winner.

“I’d face either of them this second,” he said. “No preference (as to whom he’d rather face). I’d beat either of them. I’m confident of that.”

Conlan also stated that he’d love to make fights with Cuban Robeisy Ramirez (4-1, 3 KOs), who beat him in the 2012 Olympics, as well as Skakur Stevenson (14-0, 8 KOs), in the future. Both are with Top Rank, Conlan’s promoter, which would make negotiations easier. But when it comes to who he sees as a potential “mega fight” opponent, it’s Vasiliy Lomachenko (14-1, 10 KOs).

“After I win a world title at 122-pounds, I’ll definitely go back up to featherweight,” he said. “If Lomachenko moved back down we could do a super fight. He’s one of my idols, someone I’ve always looked up to since the amateurs. I enjoy watching Lomachenko the most (of any current fighter) because of his complete and utter technical dominance.”

Montero started his review opining on Jamel Herring’s DQ8 win over Jonathan Oquendo on September 5. Many accused Herring of looking for a way out of the fight. However, Montero feels the criticism was unfair and believes Herring, now 22-2 (10 KOs), will look much better against Carl Frampton when they fight early next year.

Yordenis Ugas (26-4, 12 KOs) also scored a split decision win over Abel Ramos on September 6. Even though the Cuban dominated, clearly winning the majority of the rounds, veteran judge Lou Moret somehow scored the bout 117-111 for Ramos. It was one of the more absurd scorecards since Adalaide Byrd’s 118-110 score for the first Canelo-Golovkin fight.

On September 12, Egidijus Kavaliauskas (22-1-1, 18 KOs) dropped Mikael Zewski twice before scoring a TKO8 win in the main event of the ESPN+ card. The Lithuanian says he wants a rematch with Terence Crawford, but there is very little demand from fans. Why not rematch Ray Robinson? They fought to a disputed drawn last March in Philadelphia.

TIME STAMPS:
@3:11 thoughts on the Canelo Alvarez lawsuit and him being the current face of boxing
@15:45 thoughts on the Charlo doubleheader PPV price tag, while Lomachenko vs Lopez is on regular ESPN
@24:52 reviews of Herring DQ8 Oquendo, Usag SD12 Ramos, Kavaliauskas TKO8 Zewski; preview of Jose Pedraza vs Javier Molina, Saturday, September 19 on ESPN+
@38:25 interview with Michael Conlan
@1:07:37 preview of Erickson Lubin vs Terrell Gausha, Saturday, September 19 on Showtime