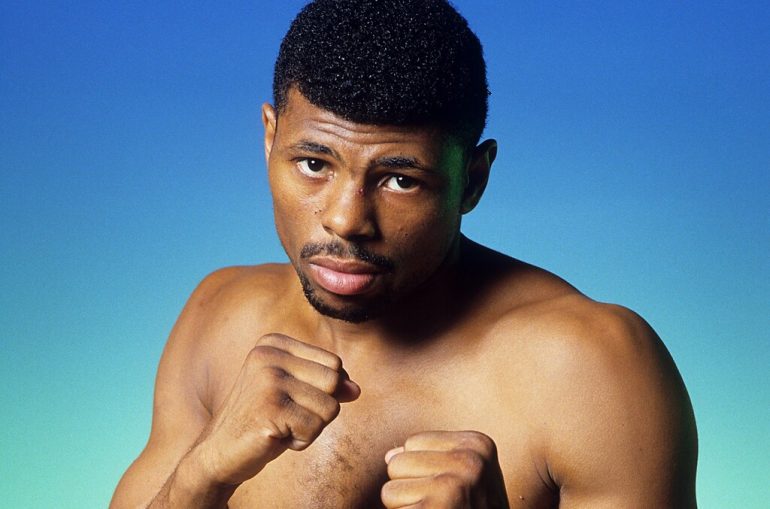 Photo from The Ring archive
14
Sep
by Anson Wainwright

Skilled boxer-puncher Frank Tate is one of a select band of men who won an Olympic gold medal before acquiring a world title as a professional.

Tate was born in Detroit, Michigan on August 27, 1964. He was from a big family and grew up on the east side of Detroit and attended Kettering High school, from which he later graduated.

“I had a good childhood, I was very fortunate,” Tate told The Ring. “I have four brothers and two sisters. All my brothers boxed but Thomas and I stuck with it.

Tate learned his trade at the famed Kronk gym, which was thriving under Emanuel Steward. He sparred with Thomas Hearns, Milton McCrory and Jimmy Paul on a regular basis.

As an amateur, the talented young fighter won the Golden Gloves and U.S national championships in 1983 before qualifying for the 1984 Olympics in Los Angeles.

“I was happy to be there,” Tate recalled. “It was so tough but it was my dream ever since I was a kid. When I finally got there, I wasn’t going to let nothing distract me. I was like those racehorses with those patches on; all I could see was straight ahead. I went there for that gold medal and I wasn’t going to be denied.

“When I brought that medal back my mom was the first person I showed it too because I wanted to show her I did it.” 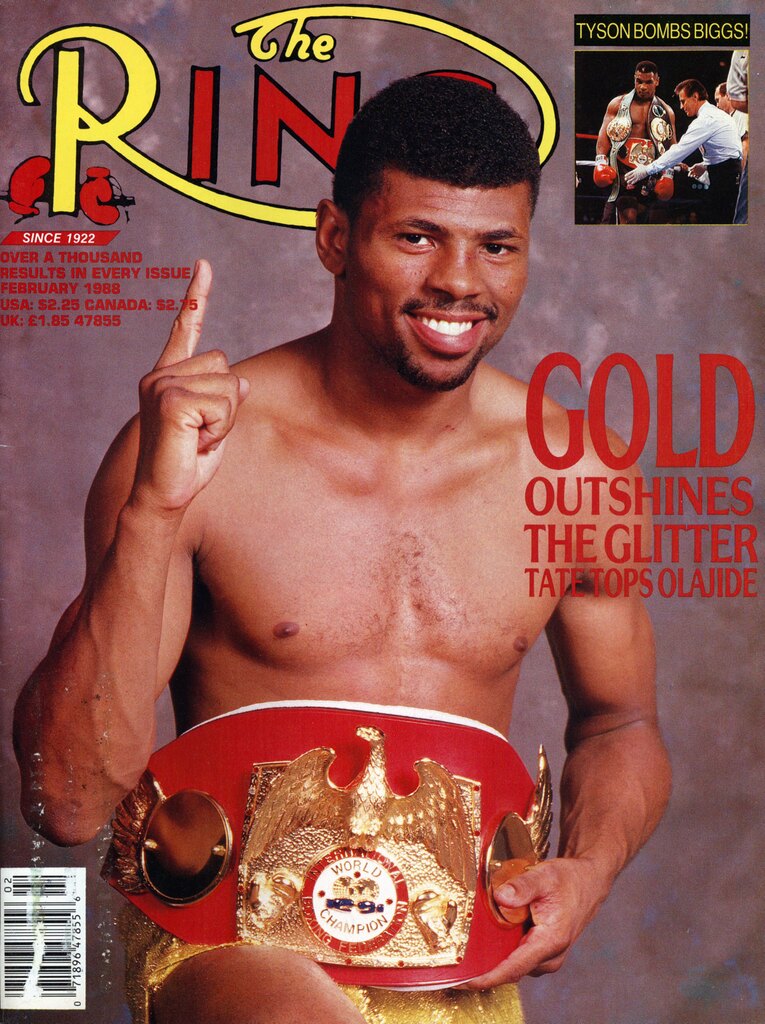 After compiling a 125-5 record as an amateur, Tate looked to secure his future by making a move into the professional ranks. However, he had important decisions to make.

“I went to Emanuel at his office on the west side of Detroit and tried to figure out how we’re going to go pro,” Tate explained. “He offered to buy me a $90,000 house and a Pontiac 6000 but none of it was gonna be in my name, so I couldn’t go for that.

“I said, ‘I’m gonna go to Houston – Houston Boxing Association, HBA, Josephine Abercrombie – and see what they’re talking about.’ Everything sounded good in Houston, so I went to the south.”

Tate, along with younger brother Thomas, migrated to Texas and turned over in late-1984.

In April 1987, Sugar Ray Leonard upset long-reigning champion Marvelous Marvin Hagler to win the WBC middleweight title. The other governing bodies had refused to sanction Leonard as challenger and their titles quickly became vacant when he went back into retirement. Consequently, the IBF 160-pound title was on the line when Tate and Michael Olajide met in Las Vegas that October.

“Before he and I fought they would put us on the same cards,” said Tate. “I would be watching him and he was probably watching me. I knew it was being built up and when the time was right they’d put us in together.

Olajide, a 2-1 pre-fight favorite, was dropped in the 11th and 12th rounds but hung tough to last the course. The knockdowns, however, cemented Tate’s victory by 15-round unanimous decision. 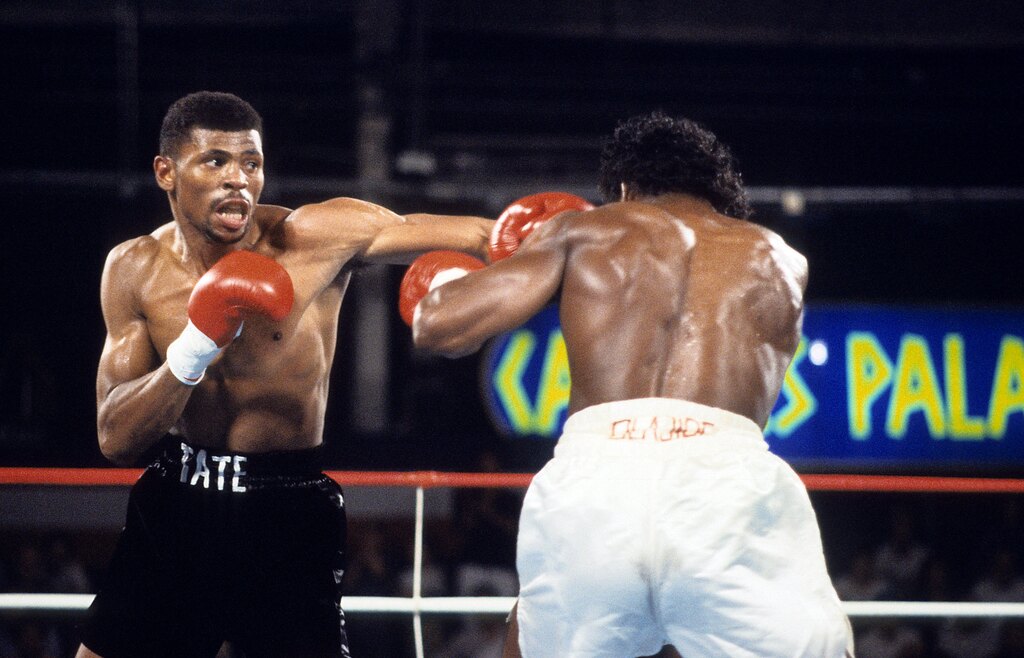 Tate rams the jab into the face of Michael Olajide. Photo from The Ring archive

In his first defense Tate traveled to England and stopped Tony Sibson in 10 rounds. However, his second defense came against the slick, unbeaten lefty Michael Nunn in Las Vegas.

At that time the weigh-in was on the same day as the fight and Tate struggled terribly to make 160.

“Not taking anything away from Michael Nunn, I had to lose too much weight and I left everything in the gym,” said Tate, who was stopped in nine rounds in Las Vegas. “He caught me at the right time. I had to drop 20 pounds. When I made 160, that was it, nothing left, I couldn’t recover in time. My whole training camp was focused on making 160.”

Tate moved up to light heavyweight and won a comeback fight, but he was unable to procure any title opportunities and finally accepted a bout against Lindell Holmes for the vacant IBF super middleweight belt in January 1990. Tate dropped a 12-round majority decision in New Orleans.

“My focus wasn’t there,” he said. “At the time I was training with Jesse Reid. The training camp didn’t go right, that whole fight was a disaster. I still had to fight anyway.”

After winning a further six fights at 175 pounds, Tate met former Olympic teammate Virgil Hill for the WBA title in September 1992. He dropped a wide unanimous decision and it was the same result when they met again in July 1994.

“My mind was good when I fought Virgil,” he admitted. “Both fights were in his hometown. I think, at that time, he was just a better fighter.”

Tate won seven fights over the next couple of year before losing to David Telesco in October 1998. He retired with a career record of 41-5 (24 knockouts).

Tate, 56, married his high school sweetheart in May 2018 after losing contact with her when he went to the Olympics and she joined the army. He has three children from a previous relationship and still lives in Houston. He works in construction and gives to boxing by helping out a few fighters.

The former titleholder graciously took time to speak to The Ring about the best he fought in 10 key categories.

BEST DEFENSE
Virgil Hill: Virgil had a good defense. He likes to throw a hook so he stayed on his left side. The only time I hit him, the first time, was with an uppercut. It was hard to hit him with straight right hands. It was tough to land anything on him.

BEST HANDSPEED
Michael Nunn: Michael Nunn had quick hands. He came from a southpaw stance. It’s already difficult fighting a southpaw, but if you’ve got good handspeed, that’s double the trouble. He had lightning handspeed – that’s a very good package.

BEST FOOTWORK
Hill: He had strong legs. When I hit him with that uppercut, I thought that was gonna be it. With him having strong legs and good footwork like he had, he endured the power from the punch. If I had hit anybody else with that uppercut it would have been over. He didn’t come in as much after that; he was able to adjust and use his footwork.

SMARTEST
Olajide: I think all three of them: Virgil, Michael Nunn and Michael Olajide had good I.Q. Those were my three toughest fights. I would say Michael Olajide, we went 15 rounds for the middleweight championship of the world. He was slick and long and he tried to put me in some traps but I wouldn’t fall for it. He fought some of the same guys I fought. We both fought Troy Darrell, and the way I boxed him and the way he boxed him was similar. He’s a thinker, he doesn’t just go in there and throw punches.

STRONGEST
Hill: I would say Virgil. Moving up to light heavyweight and adding 15 pounds was a big difference. That was something he was used to and I was just getting used to. He was very solid, that’s why he was champion for a very long time. Uriah Grant was a strong guy.

BEST CHIN
Hill I never really got a chance to hit Michael Nunn. I hit Virgil and he withheld it. I hit Michael Olajide with it and he went down. I have to say Virgil.

BEST BOXING SKILLS
Hill: Virgil had good skills. He could do everything; he could move, he could box, he could hold his own. He wasn’t a guy who comes in there and just throws punches. He set you up, put punches together and threw combinations. He stayed busy on the offense.

BEST OVERALL
Nunn: I’d give it to Nunn. For a southpaw… he had the height. If you have a gift, use it. Michael Nunn used his to the fullest.