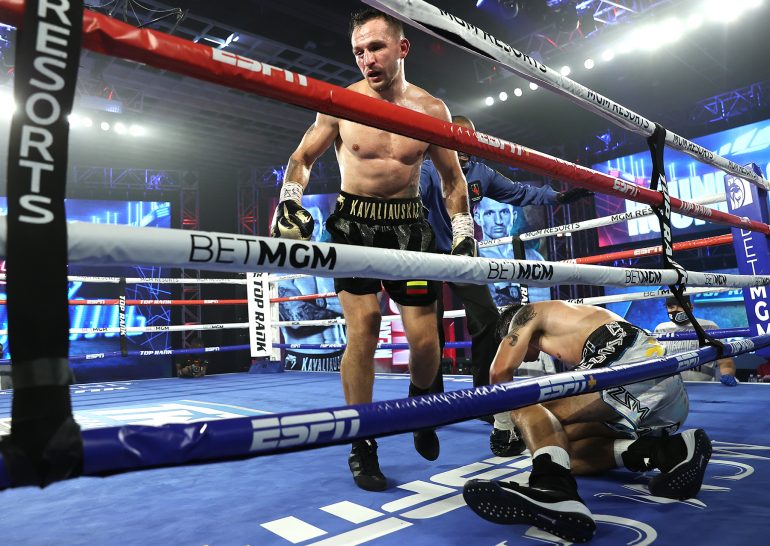 Egidijus Kavaliauskas is a winner once again.

A two-time Olympian from Lithuania, Kavaliauskas rebounded from a slow start to score an eighth-round knockout of Quebec’s Mikael Zewski in their ESPN+ main event Saturday evening at the MGM Grand Conference Center in Las Vegas.

Kavaliauskas dropped Zewski twice, with the final knockdown forcing a stoppage seven seconds into the eighth frame of their scheduled 10-round welterweight contest.

Both combatants were fighting for the first time in 2020, with Kavaliauskas coming off the first loss of his career at the hands of Terence Crawford, while Zewski was riding an eight-bout winning streak and looking to keep the momentum alive.

After a slow opening round, Kavaliauskas dictated the pace in the second round behind an impactful jab.

Kavaliauskas controlled the action in round two, concentrating on a purposeful jab and often doubling up with the weapon. Zewski countered with left hooks downstairs, though unable to pick up his guard in time defend against Kavaliauskas’ overhand right.

⚠️ These angles of the Mean Machine finish.

Zewski picked up the pace in round three. Kavaliauskas continued to work behind his jab, though far too often without following up with a right hand.

Zewski connected with rights of his own, also consistently touching his left hook to Kavaliauskas’ body while keeping the action in the center of the ring.

Kavaliauskas fought through adversity in the fourth round as his right eye was swelling at an alarming rate. Zewski tried to pour it on late in the round but was met with counter right hands from Kavaliauskas.

For the first part of the fight, Zewski’s superior work rate appeared to be a determining factor. But by the beginning of the seventh round, the Canadian appeared to be low on fumes.

That turned out to be his downfall in round seven when Kavaliauskas unloaded a right uppercut that buckled the knees of Zewski, with the 32-year-old following up with a series of hard power shots to send his man to the canvas.

Zewski rose at the count of nine and was subsequently saved by the bell.

But there would be no saving grace in the eighth round as Kavaliauskas (22-1-1, 18 knockouts) closed the curtain just seconds into the round, flooring Zewski (34-2, 23 KOs) with a clean right hand. Referee Kenny Bayless immediately stopped the fight when Zewski hit the deck.

At the time of the stoppage, Zewski was ahead on two of three scorecards.