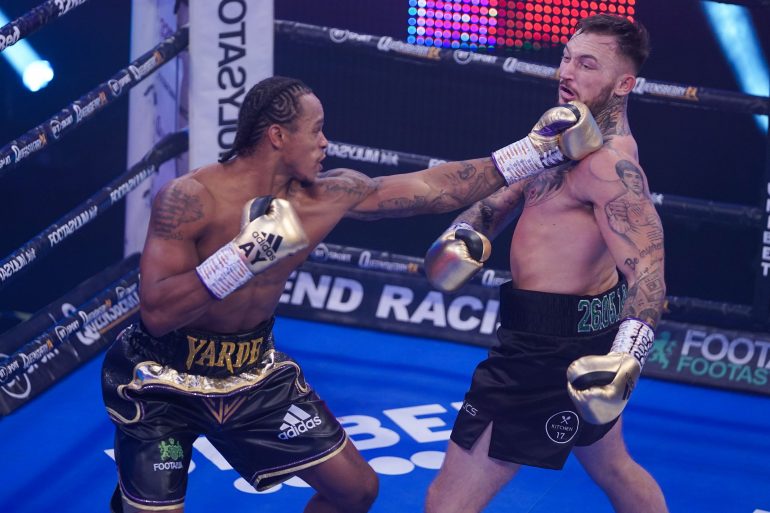 Yarde, who endured a tumultuous period losing his father and grandmother to COVID-19, returned to boxing for the first time since a two-round stay busy win in February.

The 29-year-old Londoner took his time and used a consistent jab that by the third round had Spelman’s nose bleeding and his face marked up. Yarde (20-1, 19 knockouts) fought a very controlled fight and was the classier operator.

In the sixth, the big-punching Yarde hurt Spelman (16-5, 8 KOs) with a big right hand and jumped on the hurt fighter, bludgeoning him to the canvas. To Spelman’s credit, he gamely rose to his feet, but referee Michael Alexander saw enough and wisely waved it over at 2:42 of the sixth round, much to Spelman’s chagrin.

“This win meant a lot,” said Yarde, who is The Ring’s No. 10 light heavyweight. “I was sharp. It’s all about experience. As everyone knows, I’ve had 12 amateur fights. This was my 21st professional fight, but I’m still inexperienced. I’ve knocked out a lot of my opponents. It’s not the fact I was looking to go longer in this fight, it’s about being more patient, looking for my shots. I’m just going through the gears.”

It is expected that Yarde will fight Commonwealth champion Lyndon Arthur on the undercard of Daniel Dubois-Joe Joyce, which is penciled in for October 24, though could be moved to late November.

The eagerly anticipated British middleweight eliminator between Mark Heffron and Denzel Bentley lived up to its billing. At the conclusion of 10 rounds, neither man could be separated and all three judges deemed the fight a draw and handed in identical 95-95 scorecards.

Bentley (13-0-1, 11 KOs) dropped Heffron (25-1-1, 19 KOs) in the second round with a left hook, but the Oldham-born fighter worked​ his way back into the fight and both men fought on even terms for the remainder of the bout.

“I thought I won it,” Bentley said. “First time doing 10 rounds. I fell asleep in the middle of the fight and he managed to pick up the pace a little bit. I think I managed to claw back at the end. I thought the knockdown would have pushed me by a point or two.”

Heffron replied in kind: “I won that fight 100-percent. The round he won, he caught me. I outworked him every round. He caught me with the odd jab. That was it.”