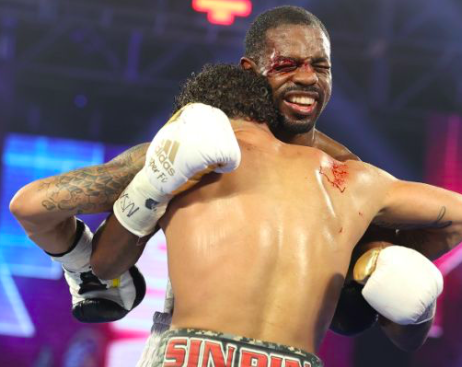 It’s the age we’re in, we all expect it, we know we are going to get those “hot takes,” and some of them are going to be pretty raw, and maybe not as respectful of the people who are putting their lives on the line as you’d think or hope.

Ah, but usually the too-biting comments pop up on social media, not on the air, not from ex fighters who you have to think know that making a judgement call on what someone else is thinking inside the squared circle is an iffy choice.

Last Saturday, Jamel Herring put his WBO 130 pound title up for grabs against Jonathan Oquendo, in The Bubble at MGM.

A butt in round five from the 37 year old Oquendo opened a slice on the right eye of the 34 year old Herring, the Marine who served two tours in Iraq, has battled PTSD, and is a role model on social media, for people dealing with tough stuff. After round 8 ended, Herring went to his corner. Trainer Brian McIntyre looked at the eye, as Herring, who lives in Cincinnati, got assessed by a ring doc, and ref Tony Weeks.

Herring admitted his eyesight in the right eye was compromised. “He can’t see, doc,” McIntyre told the physician looking at the southpaw military vet, who captained the 2012 US Olympic squad. The doc told the ref that Herring couldn’t continue, and after some discussion, Weeks called Herring the winner.

Bernard Osuna, the ringside reporter, did a decent job collecting info. He cited, correctly, the so-called “unified rules,” the regulations used by all US boxing commissions, to encourage uniformity in overights.

If an intentional foul occurs, and the bout continues, but later the damage caused by the foul renders a fighter unable to continue, the injured fighter is to be awarded a technical decision. That is, if the fight has gone more than four rounds, and the hurt boxer is ahead on the cards. And that’s what we thought we’d hear from the emcee on Sept. 5th. Then Osuna heard the commission discussing with Weeks the correct disposition, and he told viewers that Weeks would be pulling the trigger on a DQ. But in fact Herring was announced the winner, via disqualification, because Oquendo butted him a few times. And Weeks determined he did so intentionally…so he used his leeway as the ultimate arbiter of the contest, and he disqualified Oquendo. Makes sense, if you go over it a few times in your head.

He called Herring a quitter.

“And that’s the problem I’m having right now, because I’m trying to digest this all right now, and I’m saying, the reason that you can’t see, is because you got blood dripping down in your eye,” Bradley continued. “You can see once they clear that up. To me, I honestly feel like he gave up.”

Ward said he didn’t know how badly the eye was hurt, but “I would have liked to have seen Jamel Herring find a way to get through this.” When the blood came, “I saw a totally different Jamel Herring.”

OK, you get it, you see that Bradley went out longer on the limb but Ward also cast an aspersion, just with more slickness. 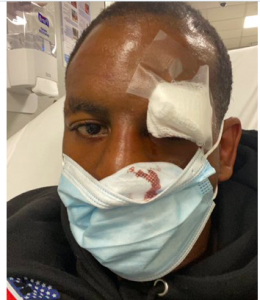 Herring at the hospital hours after he won by DQ and got called a quitter.

So, you heard Bradley making a judgement call, based on what he saw, or what he believes he saw. Herring, five hours after the bout, told me he didn’t quit, and that it wasn’t merely blood in his eyes.

“So to say I quit just sucks… I’ve been through so much in life as it is. Never been a quitter!”

Herring messaged me that after he’d been in the imaging machine, getting a Catscan, to make sure his brain didn’t absorb trauma and there was no bleed inside his skull.

Later on Sunday, I asked again, how was his eye. “Vision still ehh in my right eye but I have to see a specialist when I get back home sometime this week,” the 22-2 pugilist said. “I’ll be fine though Mike. I’m honestly not stressing the criticism.” He is terminally upbeat guy, by and large, but he told me he was worried for how some of his loved ones were taking it.

By Wednesday, late evening, Herring seemed even more settled, in a good way. “Eye is still healing, but thank God my vision is starting to appear normal,” he said. “Vision was blurry two days after the fight to the point I was panicking at home, because I really didn’t know how bad it really was, if it would heal properly, or what. I’ve been cut many of times now as a pro so the blood or cut wasn’t a huge concern, wounds heal, but I was really more worried for my eye itself, because the doctor said the cornea was scratched up pretty good.”

That right there is what no one on the outside can know. Nope, not even an ex fighter. Bradley saw some blood dripping into Herring’s eye, but he knew nothing of the cornea. And maybe Bradley will talk about it on air tonight, during the Egis Kavaliauskas-Mikael Zewski welterweight clash on ESPN+, but had he recalled some of the punishment Herring has dealt with in fights, and fire walked through?

“Mike, I’ve fought through hell against Denis Shafikov, in a fight I knew I was greatly down in, put on my ass in the second round, had a HOLE in my bottom lip, with a scar to remind everyday of that fight, and a busted eye, yet I still fought my heart out in that fight,” Herring told me. “So when people actually thought I QUIT against Oquendo, it was heartbreaking. In the Oquendo fight, I really knew something wasn’t right, and it got to a point where I couldn’t see his left hand because my right side was just blurry. I have an appointment Monday with the VA since it’s easier for me to deal with. Hopefully by then I should be far better.”

Listen, friends, I get it, I get the atmosphere we are in, I know producers love those hot takes, and actually, I’d rather analysts take a stand now and again. The biggest no-no, actually, is being boring. But better to be “boring” than point a finger at a man who quite simply deserves the benefit of the doubt.

Yes, almost a week later, and I’m still surprised by what Bradley said, and how Ward aligned with him. I shouldn’t have to remind either of those two men some of the tragedies we saw last year in the sport. And I thought we made headway after that, and we weren’t hearing so many instances of outsiders calling fighters quitters. I guess we didn’t make as much progress as I’d thought. Max Kellerman saw the light after it was brought to his attention last year that ‘the Q word’ shouldn’t be employed or implied so readily.

I shouldn’t be surprised, I wish I were less naive. A friend with decades in the game reminded me of another occasion when a ringside analyst took a stance, and things played out in such a way that he wished he couldn’t gone back in time, to change his phrasing, probably.

Ferdie Pacheco analyzing the 1995 Nigel Benn vs Gerald McClellan fight showed that his acumen was overrated. The WBC super middleweight champion Benn had been whacking Gerald behind the head, and in round ten on Feb. 25th in London, the punishment was taking an insidious and heavy toll. Two hard and clean right hands landed, and McClellan took a knee.

“Now that is the strangest knockdown I’ve seen,” said Pacheco, inexplicably. Action re-started, and three hard shots at least struck home on the American boxer. He took a knee, again.

“What’s hurting him, something is hurting him,” the MD Pacheco said, bizarrely. The ref reached a count of ten, with McClellan (below) keeping the right knee down until the count of ten had been reached. He looked composed, so Pacheco couldn’t compute what he’d seen. 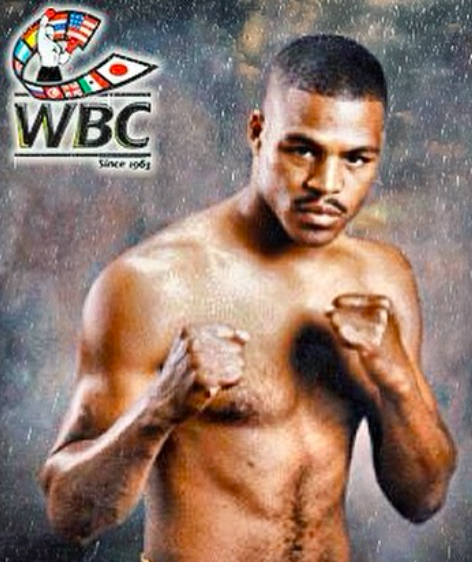 Media should make it a habit to periodically watch tapes of fights like Benn vs. McClellan, to remind themselves that things aren’t always apparent on surface.

“I can’t believe that, I’ve never seen a guy quit in the corner like that,” said the man who made his bones publicly shaming Muhammad Ali for fighting on.

To his credit, after two minutes passed, and he saw McClellan slumped in his corner, Pacheco righted himself. It could be some neurological issue, he told Showtime viewers. And he then reverted back to know it all. “It could just be a heart problem,” he said, casting Benn as the more gutsy pugilist. As he looked at slo mo, Pacheco spoke of the loser’s “resignation” and said “there was no reason for him to go down.” He called him a quitter, a few different ways. It was only when a stretcher came out, and medical staff attended to Gerald did Pacheco really change his tune, and sound like a real doctor, instead of an Oz or Phil. Pacheco then took another opportunity to slam McClellan’s cajones when he interviewed Benn post-fight.

McClellan (31-3, 29 KOs) deteriorated from there. He had a brain bleed, had surgery, and was in a coma for 11 days. The “G-Man” survived, but the amount of brain damage incurred is such that he is viciously and irrevocably compromised.

Last week, I raised my eyebrows when I heard Ward say that Weeks “definitely” made the right call when he called the round five butt on purpose. Replay showed Oquendo throwing and coming forward with his head…But we’ve seen that move before, and the ref not calling it intentional. In fact, get going in to YouTube and guess what, you can see examples of Bradley AND Ward angling their own skulls and contact being made. Bradley was often shorter than foes and he’d get into the other guys’ bread basket, and drop his chin and his skull sometimes made contact with the oppositions’ face.

Go back and watch some tape of Ward fighting Mikkel Kessler. You will hear Al Bernstein, calling the fight on Showtime, say that Ward “blasted Kessler” with his head. “Andre Ward came in like a bill goat on that one,” says Bernstein.

See, people forget. I do. I guess Ward forgot that sequence. Maybe he’ll admit as much when he’s working the fights that run on ESPN+ tonight, that memories can be faulty, and so can rushes to judgement on air.

But if you haven’t seen Ward fights, track down some footage. He could and would and did use tricks of the trade that analysts picked up on. “That’s what you call a deliberate elbow,” said Bernstein, after Ward used an MMA style elbow strike against Sakio Bika. Points being, I’d almost have expected Ward to embrace heavily the fighting style of Oquendo, who for sure did make a decision that he’d use pretty much all available body parts to try and gain an edge against Herring. But be so stringent while reviewing Herrings’ outing? I didn’t expect that.

I will take a cue from Herring, who does a good job cycling through instances when he collides with difficulties. I will try to remind myself that in the heat of a moment, we can all zag when we should have zigged.

But that doesn’t change my stance–I’m hoping Tim Bradley, and Andre Ward during the ESPN show this evening run it back, get humble, and apologize to Jamel Herring.

–Connect with Brooklyn, NY resident Michael Woods on LinkedIn, if you wish.