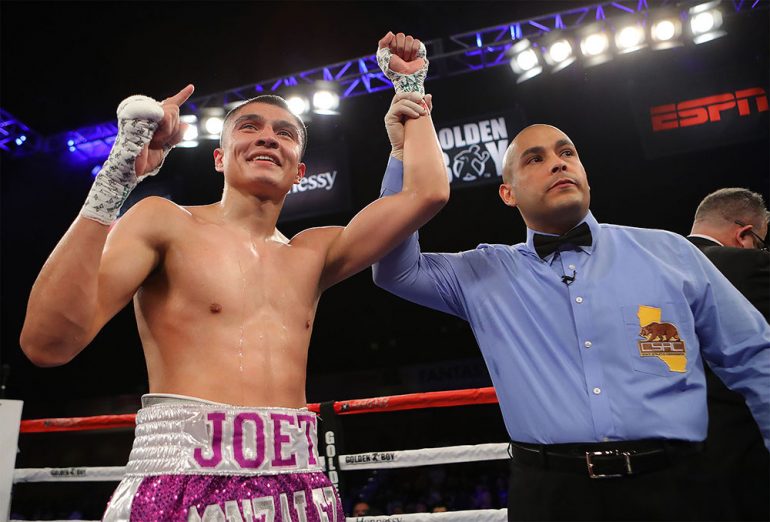 The road back to title contention won’t be an easy one for Joet González.

But the 26-year-old has a chance to get back on track with a victory over fellow former 126-pound title challenger Miguel Marriaga in a scheduled 10-round affair on Saturday at the MGM Grand Conference Center in Las Vegas.

The bout will serve as the chief support to the main event of a Top Rank on ESPN card which features welterweights Egidijus Kavaliauskas and Mikael Zewski in a crossroads clash.

González implied that his opponent’s experience could be a determining factor in the outcome of the fight.

“Marriaga is a very tough guy,” he stated. “This won’t be an easy fight.”

Marriaga has won 29 of his 32 pro bouts, with 25 coming by way of knockout. All three of his defeats have come in title fights against the likes of Nicholas Walters, Oscar Valdez, and top pound-for-pound contender Vasiliy Lomachenko.

If González defeats Marriaga, he could put himself in prime position to fight for the same belt he lost to Stevenson, who has since vacated the title to move up to the junior lightweight limit of 130 pounds. Emanuel Navarrete and Ruben Villa will square off for the vacant championship on Oct. 9.

“I’m exactly in the position I need to be to make another run for the title,” González said. “Training camp has been very good and I have gotten some good sparring. We’re taking this fight seriously.”

Mexican Independence Day also happens to be on September 16th and González (23-1, 14 knockouts), of Los Angeles, is extra motivated to perform at his best.

“This fight is very special to me because it’s actually my first time fighting in September, too,” he added. “Obviously it feels great because I have family in Mexico living in Guadalajara.

“They’re going to be out there supporting me and tuning in to ESPN. It’s a great feeling.”

González also reflected on his loss to Stevenson and the lessons that he has taken from that experience.

“It simply wasn’t my night,” he stated. “I learned that you can have the best camp and come fight day; it just doesn’t go your way.

“It is what it is. That’s boxing. We’re moving forward. It was Shakur’s night. I would love to get a rematch with him down the road, but I have to earn it first.”