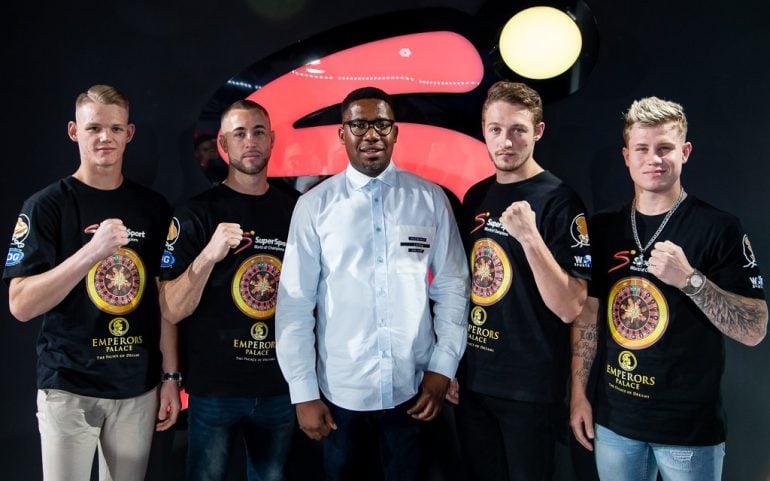 Boxing will return to South Africa after a seven-month hiatus due to the COVID-19 pandemic on October 10 at Emperors Palace, Johannesburg.

The countries leading promoter, Rodney Berman of Golden Gloves, has worked tirelessly over the past few months to make it possible and is pleased to finally have a working date.

The four-fight card will be headlined by the final of [email protected] between junior middleweights Boyd Allen and Brandon Thysse.

“Many a hurdle had to be cleared,” Berman told The Ring. “Including the absence of a live crowd, extensive testing, reduced number of rounds and eco-isolation for all the participants, but fans will finally get to see the fights they have been looking forward to for so long and then some.

“The winners may not be certain, but entertainment value for the fans watching from the safety of their homes is all but guaranteed.”

Allen (5-0-1, 4 knockouts) earned his place in the final with a 10th-round stoppage over fellow South African Tristan Truter in an action-packed encounter.

His opponent, Brandon Thysse (12-2-1, 10 KOs), made his way to the final by stopping previously unbeaten Roarke Knapp in seven rounds.

When the two fought in May 2019, Allen edged matters claiming a razor-thin, 12-round split decision. The rematch is expected to be just as tightly contested.

“What a great fight,” Berman said. “I’m really looking forward to this one. The first fight between them was very competitive and I fully expect this one to carry on where that fight left off.”

“Both guys did well in their semifinal fights, but came up short,” Berman said. “I’ve spoken to both and they know how important this fight is. It will be very interesting to see who is able to get the upper hand and come out victorious.”

“Makhense is one of the most exciting talents we have seen for many years in South Africa,” said an enthused Berman. “He fights with a maturity far beyond his experience to date. Great things are predicted for him in the junior welterweight/welterweight divisions. This should be a good test for him against a seasoned campaigner.”

After the success of the junior middleweight [email protected], Golden Gloves have decided to mirror that process up at cruiserweight. The first semifinal will see Akani Phuzi (11-0, 5 KOs) face Chris Thompson (9-2, 6 KOs).

“Akani Phuzi is also widely touted as South Africa’s next cruiserweight sensation,” said Berman, who currently promotes world-rated Kevin Lerena. “Phuzi has beaten Thompson before, but both fights were exciting fights and this promises to be no different.”

The other semifinal between Keaton Gomes and Lebo Mashitoa is tentatively scheduled for December 12.