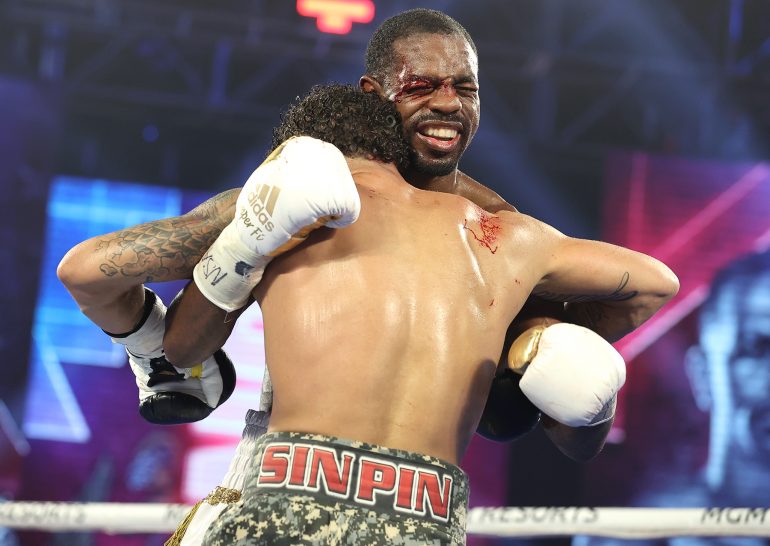 Herring was cut badly by a headbutt in his bout with Jonathan Oquendo. Photo by Mikey Williams/Top Rank
05
Sep
by Francisco Salazar

Jamel Herring successfully defended his WBO junior lightweight title, winning by disqualification over Jonathan Oquendo following the eighth round on Saturday at the MGM Grand Conference Center in Las Vegas.

Herring, who hails from Coram, New York, improves to 22-2 (10 knockouts). He had not fought since November 9, when he defeated mandatory challenger Lamont Roach by unanimous decision in his first title defense.

The 34-year-old southpaw, who served two tours of duty as a U.S. Marine, had two previous fight dates with Oquendo postponed, both due to Herring testing positive for COVID-19.

Oquendo defeated Charles Huerta by unanimous decision in his previous fight on November 14. Six months prior he had lost a close decision to Roach in a fight many at ringside thought Oquendo did enough to win.

From the opening bell, Herring landed the more effective punches, countering the aggressive Oquendo. Midway though Round 3, Herring landed a left uppercut to the head that dropped Oquendo. The challenger did not appear to be hurt, however, as he beat the count and fought on.

While Herring was in control, Oquendo spent most of the fight leading with his head. Following several head clashes, Herring finally suffered a cut above his right eye in Round 5. Referee Tony Weeks ruled that the wound was caused by a headbutt and deducted a point from Oquendo at the end of the session.

Oquendo continued to press, but the action was untidy. Herring would throw a punch or counter, then grab on to Oquendo, who smothered his own work more than anything.

After the end of Round 8, Herring told referee Tony Weeks that he was unable to see out of his right eye. Herring’s corner, including trainer Brian McIntyre, asked Weeks if Herring would still retain his title if they were unable to continue.

According to ABC unified rules the fight should actually have been declared a technical decision victory for Herring because the action continued after the intentional foul. Had the bout been stopped in Round 5, the correct call would have been for Herring to win by disqualification. The official verdict may be addressed in the coming days.

CompuBox tallied up some numbers for Herring-Oquendo, which FINALLY got off the runway.

Herring remained diplomatic despite being disappointed with the manner of victory.

“He kept coming at me,” said Herring, who is promoted by Top Rank. “We knew he was going to be aggressive. We complained to Tony Weeks about it. I didn’t mind continuing. I’ve been there before. My team felt it was too much to fight with one eye.

“It just got ugly. Everything was real smooth. In the end, I wasn’t happy with how I looked. I was disappointed with the outcome. It’s not about wins, it’s how you perform. I’ve been through a 20-week training camp.”

Herring is now in line to defend his world title against Carl Frampton, who is co-promoted by Top Rank. A fight was planned for November 14 but it might need to be pushed back due to the cut.

Despite what he described as a “lackluster” performance, Herring did not think his battle with COVID-19 had anything to do with it.

“I knew he was trying to outwork me,” said Herring, who represented the U.S. at the 2012 Olympic Games. “I wasn’t tired. I was not huffing and puffing. Just the second half (of the fight) was bad.”