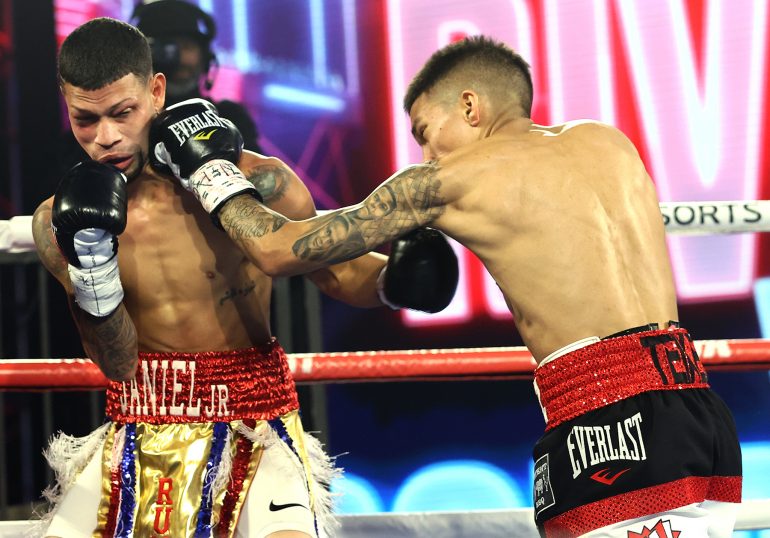 Jesse Rodriguez made a statement to the rest of the fighters at 108 pounds.

Rodriguez, who resides in San Antonio, Texas, improves to 12-0, 8 knockouts.

The southpaw Rodriguez had not fought since February 29, stopping Marco Sustaita in round 8. Despite having lost his previous three fights and having fought the better opposition, the former world title challenger figured to give Rodriguez a decent test.

Within the first 30 seconds, Rodriguez dropped Rivera with a left hand to the head. Rivera beat the count, but was overwhelmed as Rodriguez went on the attack. Moments later, a barrage of punches dropped Rivera again to the canvas.

Rivera did beat the count, but looked unsteady on his legs. Rodriguez backed Rivera in a corner, where he stepped to his left and unleashed a series of left hands to the head, dropping him to the canvas. Referee Russell Mora immediately stopped the fight at 2:03.

This angle Bam Rodriguez took to finish off Janiel Rivera in R1 … omg ?

The 20-year-old Rodriguez, who is trained by Robert Garcia, attributes training alongside older brother and junior bantamweight contender Joshua Franco as motivation to become a better overall fighter.

“He just makes me better,” said Rodriguez after the fight. “There’s times when I’m tired and I don’t want to train, but he gives me that motivation to work harder. Seeing him beat Andrew Moloney made me happy for him. Now I’m hungry. I want to be great.”

Francisco A. Salazar has written for The Ring since October of 2013 and has covered boxing in Southern California and abroad since 2000. Francisco also 16, covers boxing for the Ventura County (Calif.) Star newspaper. He can be reached by email at [email protected] or on Twitter at FSalazarBoxing