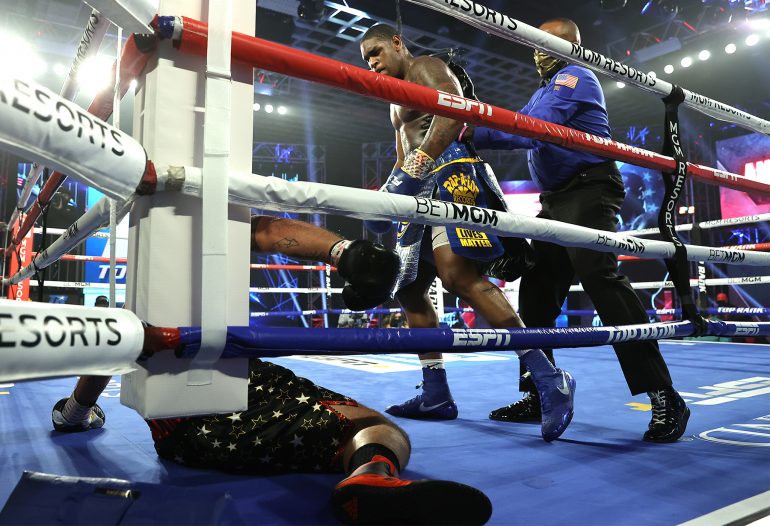 Anderson, who resides in Toledo, Ohio, improves to 6-0, 6 knockouts.

The highly-touted prospect, who signed a promotional deal with Top Rank before turning pro on October 26, last fought on July 16, knocking Hector Perez out in the opening round. He figured to get a decent test from Hernandez, who entered Saturday’s fight having lost his previous two fights after winning three fights in a row.

The shorter Hernandez was game, but was outgunned and outclassed as Anderson was the more-effective fighter, utilizing his ring generalship and quickness to keep Hernandez on the defensive.

Anderson continued breaking Hernandez down as the bout progressed. With less than a minute left in round 4, Anderson hurt Hernandez with a left uppercut to the head. Hernandez staggered back towards a corner, where a barrage of punches from Anderson dropped him to the canvas. Referee Robert Hoyle stopped the bout at 2:22.

“I proved a point tonight,” said Anderson after the fight. “I can show I can box and not just knock people out.”

Whitaker initiated exchanges and was much busier throughout the fight. Smith could have countered Whitaker’s offense, but rarely countered, only throwing one punch at a time.

Smith, who resides in Decatur, Georgia, suffers his loss as a pro and drops to 8-1, 5 KOs.

Junior lightweight Ruben Cervera of Colombia knocked out Rennard Oliver at 1:42 of the second round.

Cervera (13-2 1 NC, 11 KOs) has now won his last three bouts since losing by knockout to contender Miguel Marriaga on May 11 of last year.

The 23-year-old Cervera thought he dropped Oliver (7-3-3) with about 30 seconds left in the opening round, but the Nevada Athletic Commission ruled Rennard went down from a slip after watching a replay.

Midway through the fight, Cervera dropped Oliver down against the ropes with a straight right to the head. Oliver immediately went down to the canvas, prompting referee Robert Hoyle to immediately stop the fight.

Francisco A. Salazar has written for The Ring since October of 2013 and has covered boxing in Southern California and abroad since 2000. Francisco also 16, covers boxing for the Ventura County (Calif.) Star newspaper. He can be reached by email at [email protected] or on Twitter at FSalazarBoxing