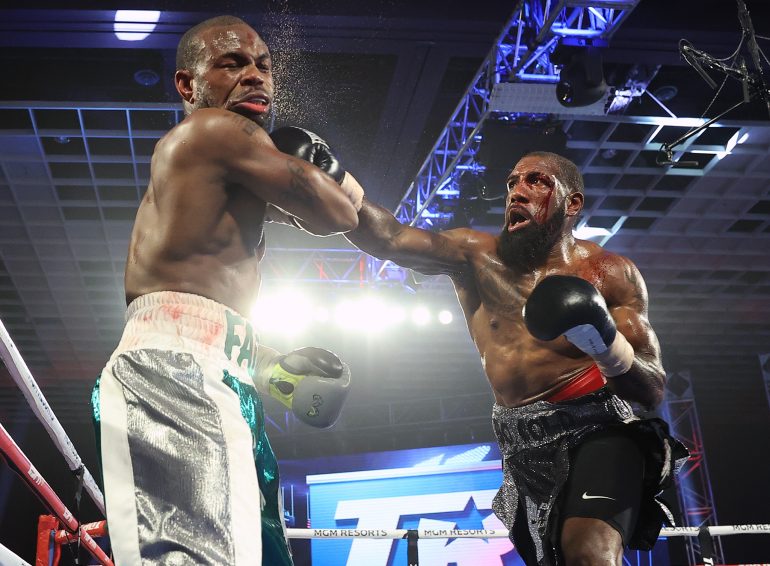 Nelson, who resides in Omaha, Nebraska, improves to 17-0, 14 knockouts and has now stopped seven of his last eight opponents.

The 32-year-old Nelson last fought on January 11, knocking out Cem Kilic in round 8 in a clash between unbeaten prospects.

Ware had not fought since losing by knockout to unbeaten super middleweight Vladimir Shishkin on August 23 of last year, but he made headlines before even stepping inside the ring.

The 32-year-old Ware was in the commission room adjacent to where the weigh-ins would be held Friday, going through his pre-fight medical examination, when Top Rank coordinator Pete Susens collapsed due to a suspected heart attack. Ware, who is celebrating seven years this week with the Toledo Fire Department, jumped into action, reviving Susens with cardiopulmonary resuscitation, or CPR, a Top Rank source confirmed to The Ring yesterday.

Ware’s manager, David McWater, said Ware had to administer chest compressions twice while waiting for the ambulance to arrive. Susens is currently recovering at a Las Vegas-area hospital.

Nelson was the more-effective fighter from the opening bell, connecting with accurate punches during several exchanges between the two fighters. An exchange led to an accidental clash of heads in round 2, opening a cut above the left eye of Ware.

As the bout progressed, Nelson was in command, never letting up on his attack. Ware was game, but was outgunned as his punch output began to drop.

During an exchange in round 5, another accidental clash of heads opened a cut above Nelson’s eye. After the fight was stopped to allow the ringside physician to check the cut, Nelson was more aggressive, putting Ware on the defensive.

The end came about midway through the following round, as Nelson staggered Ware with a left hook to the head. Nelson followed up and battered Ware against the ropes. Moments later, Nelson connected a combination to the head, prompting referee Jay Nady to step in and stop the bout at 2:24.