Hearn: Joshua will fight this year, behind closed doors if he has to 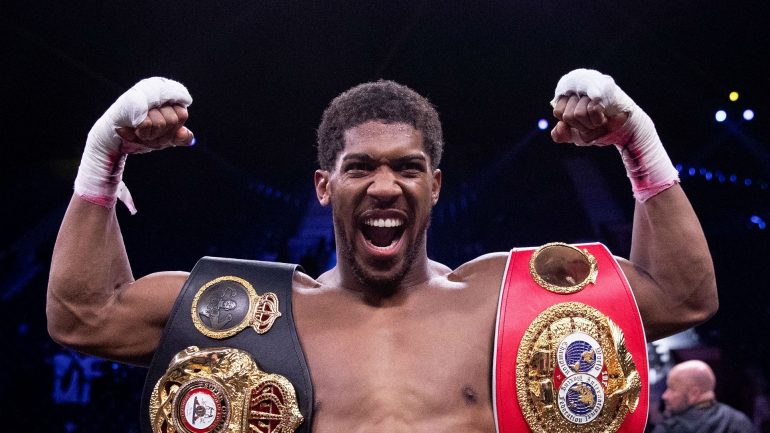 Anthony Joshua will fight behind closed doors this year if he has to, but promoter Eddie Hearn is optimistic there will be a crowd at the O2 Arena for a Dec. 12 bout against Kubrat Pulev.

The coronavirus pandemic has impacted the boxing world, yet Matchroom Boxing’s Hearn is adamant Joshua cannot afford to wait for the crisis to pass. Hearn is targeting test events with crowds in the coming months, with the aim of getting “a strong crowd” in London for Joshua.

“Someone said to me last night: ‘Presumably, if you can’t get crowds back, AJ won’t fight.’ No, AJ will fight behind closed doors if he has to this year,” Hearn told Matchroom. “He must fight. He’s progressing as a fighter, he’s learning all the time, he’s challenging himself. He doesn’t want to sit on the shelf.

“We believe through the pilot schemes that we’ll run in September and then fans coming back in October, there’s a good chance that Anthony Joshua can have a strong crowd at the O2 on Dec. 12.

“That’s the target date for that fight. Things are nearly wrapped up with Pulev’s team as well for that date. Hopefully we can build towards a massive finish to the year.”

Hearn says he is “still grinding away” on the Usyk fight for late October, while the Povetkin bout should be announced for November in the coming weeks. Whyte is looking for swift revenge after the Russian veteran sensationally knocked him out at Matchroom Fight Camp last month.

Attention is already turning toward booking a clash between Joshua and British rival Tyson Fury, though. Joshua’s camp continues to negotiate with Fury’s camp on a huge heavyweight unification fight.

“You have to understand: Why would you not want the fight that’s the biggest ever for British boxing history?”

He added: “I spoke to [Fury’s co-promoter] Bob Arum. We’ve been having some deep conversations about that fight all week. Actually, me and Bob are ready to move forward and close that fight now.”