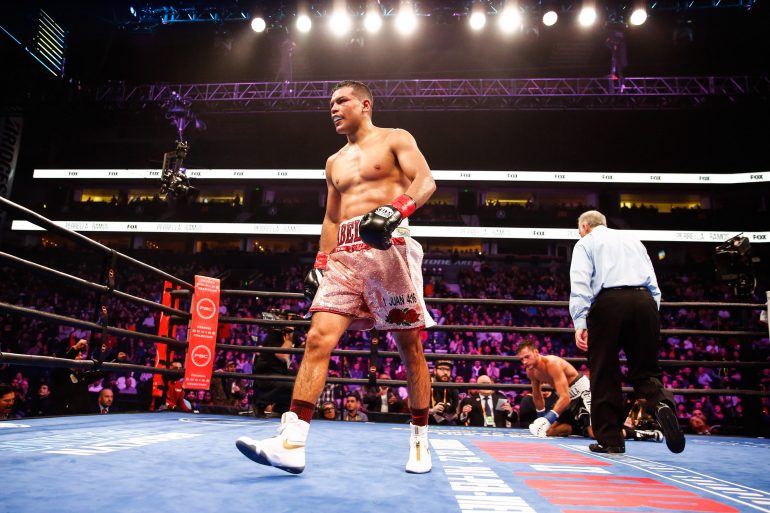 Abel Ramos wondered whether his career would amount to anything, after a few losses in meaningful fights.

Two years ago, Ramos was in stay-busy club shows in Tijuana, Mexico, trying to rebuild his confidence. After several recent key victories, including a come-from-behind triumph over Bryant Perrella, Ramos could be in line for a world title opportunity.

Standing in his way is welterweight contender Yordenis Ugas, who he will face Sunday evening at the Microsoft Theatre in Los Angeles, California. The 12-round 147-pound bout will headline a three-fight ‘FOX PBC Fight Night’ telecast (8 p.m. ET/ 5 p.m. PT).

In his last bout on February 15, Ramos (26-3-2, 20 knockouts) was victorious, stopping Perrella at 2:59 of the 10th round. Ramos was down on all scorecards entering the final round, when he dropped Perrella twice before referee Jack Reiss stopped the bout.

“I knew we were behind in the fight (on the scorecards),” said Ramos, who resides in Casa Grande, Arizona. “My brother, who is also my trainer, kept telling me to press. I knew going into the last round that I was going to catch him with the right punch.”

Ramos will be facing one of the top welterweights in Ugas (25-4, 12 KOs). The Cuba-born fighter, who now resides in Miami, Florida, lost to former world titleholder Shawn Porter in March 2019, but has won his last two fights.

The 29-year-old respects what Ugas has accomplished in the ring, but believes he has the style to beat him.

“I’m expecting the best from Ugas,” said Ramos, who has won his last eight. “The is a big fight. I know he had that very close fight with Porter. I thought Porter did a bit more to win the fight.

“I prepared myself well for this fight. I’m a boxer-puncher and I know how to mix it up on both ends. I can box or I can brawl on the inside. I have an action-style fight.”

As much as Ramos has enjoyed a recent resurgence in his career, he went through some setbacks a few years ago. He lost a back-and-forth war to former world junior welterweight titleholder Ivan Baranchyk in February 2017, a fight in which both fighters were down.

After stopping Emmanuel Robles five months later, Ramos faced Jamal James in April 2018. James did enough to win by majority decision in his hometown of Minneapolis.

Ramos immediately returned to the ring, fighting six weeks later on a card in Agua Prieto, Mexico. His next five fights in 2018 were in Mexico, stopping journeymen.

Ramos wondered whether he would get another opportunity fighting on a significant platform in the United States, causing him to reflect whether his career should continue.

After speaking with his family, Ramos decided to push forward. He received a call to face Francisco Santana on March 9, the same night Ugas fought Porter. Despite getting knocked down early, Ramos rallied to win a close decision.

A win over Ugas could put him in with the elite of a crowded, talented 147-pound division.

“I know that I’m capable of giving a good fight,” Ramos said. “The Ugas fight will let me know where I’m at the in division. It’s exciting that I get to test myself against one of the bigger names in the division.”