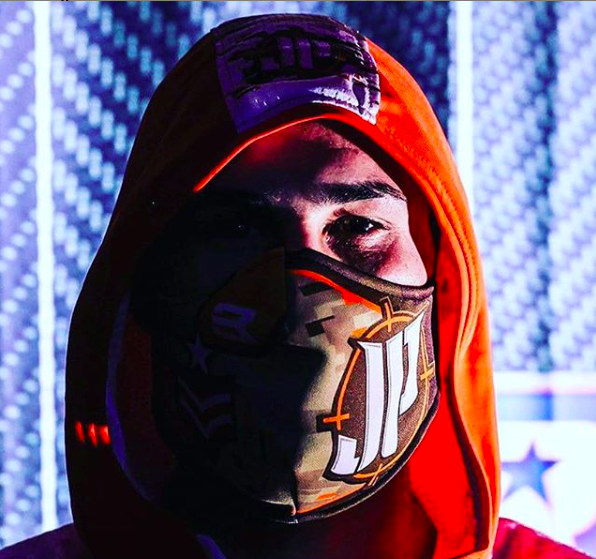 The Sniper, in a pic taken by Mikey Williams for Top Rank, will be matched tough, against Javier Molina, in Vegas.
02
Sep
by Francisco Salazar

The 10-round junior welterweight bout will take place at the MGM Grand Conference Center in Las Vegas, Nevada and will stream live, along with a co-feature bout, on ESPN+ (10 p.m. ET/ 7 p.m. PT).

The Pedraza-Molina fight was originally scheduled to take place on May 9 at the Save Mart Center in Fresno, California as the supporting bout to the main event between WBC/ WBO unified junior welterweight titleholder Jose Ramirez and Viktor Postol. The entire Top Rank card was postponed due to the COVID-19 pandemic.

With the Ramirez-Postol battle taking place this past Saturday, Top Rank decided to have the Pedraza-Molina fight headline a card.

“Pedraza and Molina asked us for a meaningful fight, and we believe the winner is in excellent position for a world title opportunity,” said Top Rank chairman Bob Arum. 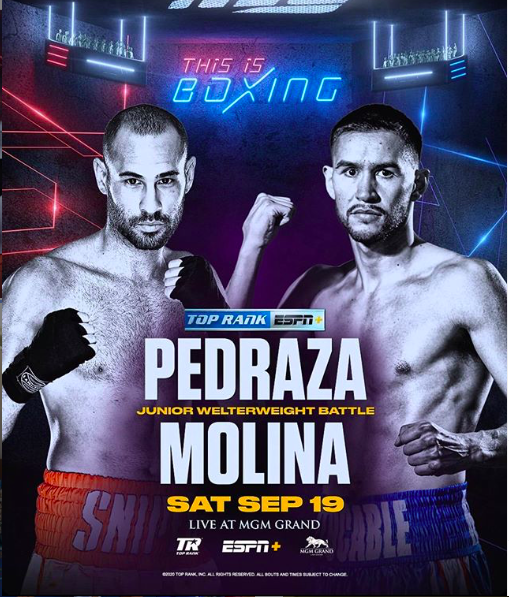 Molina has won five straight after losing to then 18-0 Jamal James in 2016. Since signing with Top Rank, he’s been active and that can’t hurt his prospects vs. Pedraza.

In his previous fight on September 14, Pedraza’s debut at 140 pounds was unsuccessful, as he lost by unanimous decision to contender Jose Zepeda.

The 31-year-old, who held the WBO junior lightweight and the WBO lightweight world title belts, is not overlooking Molina, but believes bigger things await should he defeat him on September 19.

“I’ve been looking for a fight against Javier Molina for a long time,” said Pedraza, who resides in Cidra, Puerto Rico. “I also had him on my radar because we were supposed to fight earlier this year, but the whole situation with the pandemic changed those plans and the fight was postponed. I kept training hard to keep improving and I ended up fighting against another opponent (LesPierre) and had a great performance.

“This fight will bring me even closer to a world title opportunity. My goal is to become a three-division world champion, and Javier Molina will not stop me from achieving my dream.” 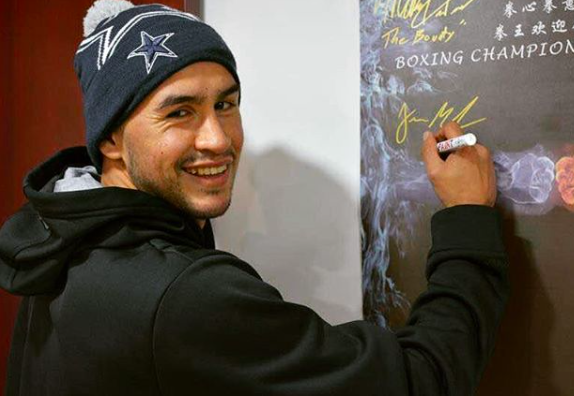 The 30-year-old has had a recent resurgence to his pro career, having won his last five bouts since a loss to welterweight contender Jamal James in January 2016. Molina is confident he has the tools to defeat Pedraza.

“Going into this year, I had big expectations for myself,” said Molina, who represented the United States at the 2008 Olympic Games in Beijing. “I know what I’m capable of, and I’m here to make a statement against Pedraza. I haven’t received the respect or recognition I feel I deserve but getting a win over Pedraza will put my name out there. It’s a huge opportunity, and I plan on taking advantage of it.”

–Francisco A. Salazar has written for RingTV since October of 2013 and has covered boxing in Southern California and abroad since 2000. Francisco also cover boxing for the Ventura County (California) Star newspaper. He can be reached by email at [email protected] or on Twitter at FSalazarBoxing