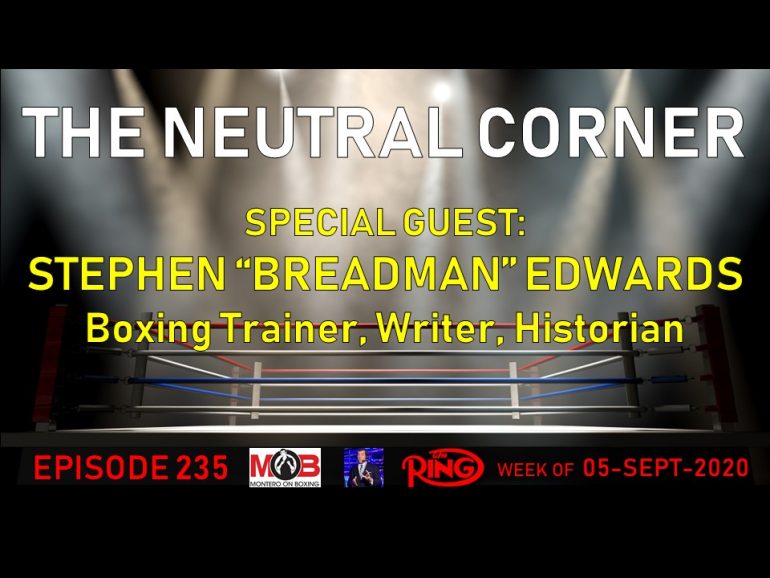 On episode 235 of The Neutral Corner boxing podcast, host Michael Montero was joined by trainer Stephen “Breadman” Edwards, who opened up to him about his recent battle with the Corona Virus. Edwards had not spoken about it publicly before.

“A lot of people don’t know this, but about a month ago I caught the COVID-19 virus,” he told The Ring. “For all the people out there who say it’s not real, that it’s a government hoax, I lost 15 pounds. I didn’t talk about it publicly, but it’s probably the worst thing I’ve ever experienced physically.”

Edwards caught the virus in late July. He was training junior featherweight Stephen Fulton, who was scheduled to face Angelo Leo on August 1. Fulton tested positive and was removed from the PBC on Showtime card. However, what many don’t know is that Fulton’s entire team, including Breadman, also caught the virus.

The following two weeks were absolute hell for Edwards.

“It was brutal,” he said. “I thought I was going to pass away. It came on like a flu, but then it changed. It started with a little cough, and then a headache, and it became progressively worse. I lost my sense of taste and smell. I couldn’t eat. I couldn’t sleep. I was taking five or six showers a day because of the cold sweats. I can see why so many people passed away from COVID. It breaks your spirit, it breaks your will power. It really screwed me up, man.”

Following his positive test in Connecticut (site of the proposed Fulton-Leo bout), Edwards drove home to Philadelphia and spent the next two weeks quarantined in his basement. Thankfully, none of his family members were infected and he has fully recovered.

During the fight review, Montero cautioned fans not to get too excited about Tim Tszyu’s dominant win over a badly faded Jeff Horn in Australia last Wednesday. Tszyu (16-0, 12 KOs) looked great against Horn and is certainly a junior middleweight prospect with a bright future, but there are still unanswered questions.

Kevin from Chicago strongly felt that Postol beat Ramirez, and politics played a part in the scorecards. “I thought Postol out-boxed him for the majority of the fight,” he told The Ring. “But it doesn’t matter because everyone knew that Ramirez was going to get the decision. Ramirez is the poster boy, the A-side, and Top Rank wants to set up the unification bout (with Josh Taylor).”

The following caller was good with the cards. “It felt like Ramirez did more damage in more rounds than Postol did,” he said. “So if you score the fight based on damage, I think he eked it out.”

Hamed from the U.K. agreed. “I don’t think Ramirez-Postol was a robbery,” he said. “I had it a draw, but I can see why Ramirez won the fight. I just don’t think Postol did enough to win.”