For real, Gleason’s Gym in Brooklyn re-opening Wednesday, Sept. 2, at 5 AM 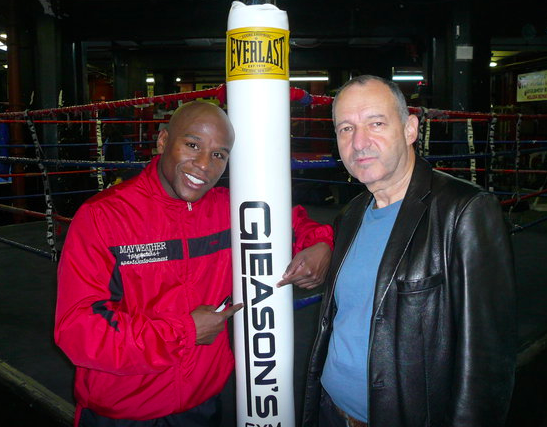 Bruce Silverglade, with Floyd Mayweather, has welcomed pros, white collars, blue collars, tourists, any and all into the famed and fabled fight club. Sept. 2, that tradition re-starts after the COVID hiatus.
29
Aug
by Michael Woods

I’m sure there have been instances I haven’t been privy to, when the NYC native, who has run the famed and fabled and recently shuttered fight club for 37 years, lost his temper and barked at someone.

One could have forgiven him if he lost his mild temperament once or twice while he’s waited with the patience of a saint to get the word he’s craved: You can open your doors.

Since March 16, the NY Governor Andrew Cuomo recommended that gyms close shop, and let the pandemic settle down, before they re-open. Silverglade’s blood pressure raised a point or two when Cuomo said that pro teams could do their thing, to train and get ready for their seasons in NY. But boxers? Their invite musta got lost in the mail…

Confetti was purchased by by the bucket when Cuomo on August 17 said that gyms could open by Aug. 24. But the buckets sat, because quite quickly, the Mayor of New York, Bill deBlasio spoiled the party. Every place will need to be inspected first, and we are short on inspectors, and inspectors are working hard to make sure schools are OK to open, deBlasio, who is not universally beloved by either voters, media, pundits at this point in time,  said.  Silverglade felt the rug burn, from the rung being pulled out from underneath.

And, to be honest, the phrasing of the re-opening terms were structured strangely. “Facilities that reopen will be subject to rigorous health and safety standards and all gyms and fitness centers will be able to open by September 2,” Team Cuomo wrote. So, Aug. 24 AND Sept. 2?

“As New York maintains daily positive test rates below 1 percent, the State has determined that local elected officials can allow gyms and fitness centers to reopen at 33 percent capacity while following rigorous safety protocols, including wearing masks at all times,” Governor Cuomo said when he blew the trumpet about the decision to allow fitness spaces to re-open.

And, actually,the more you read up on it, the more clear it became.

Local elected officials, like, say, the Mayor of the city, could delay the reopening of gyms and fitness centers until September 2 to provide time for inspection.

Minor ‘uh oh’—Cuomo and company gave deBlasio more leeway to assert their power. Local leadership, the office of the Governor said,  “may also choose to delay the reopening of indoor fitness classes until a date beyond September 2. In New York City, the Mayor will determine whether gyms and fitness centers should postpone reopening. Outside of New York City, the county’s chief executive – county executive, administrator, manager, or chair of the local elected legislative body – will determine whether gym reopening needs to be postponed.”

You get a better sense, probably, of what Silverglade has been going through since April blurred into May, May stumbled into June, June hubbled into July, July lurched into August..and still be had no clarity. No elected officials provided a clear blueprint, or even a blurry one. So on Aug. 17, Silverglade received a burst of hope, then got de-inflated when the Mayor inserted himself into the matter.

And on Friday, August 28, word dropped.

Give your alarm clock warning, Gleason’s Gym will be re-open for business at 5 AM on Sept. 2. 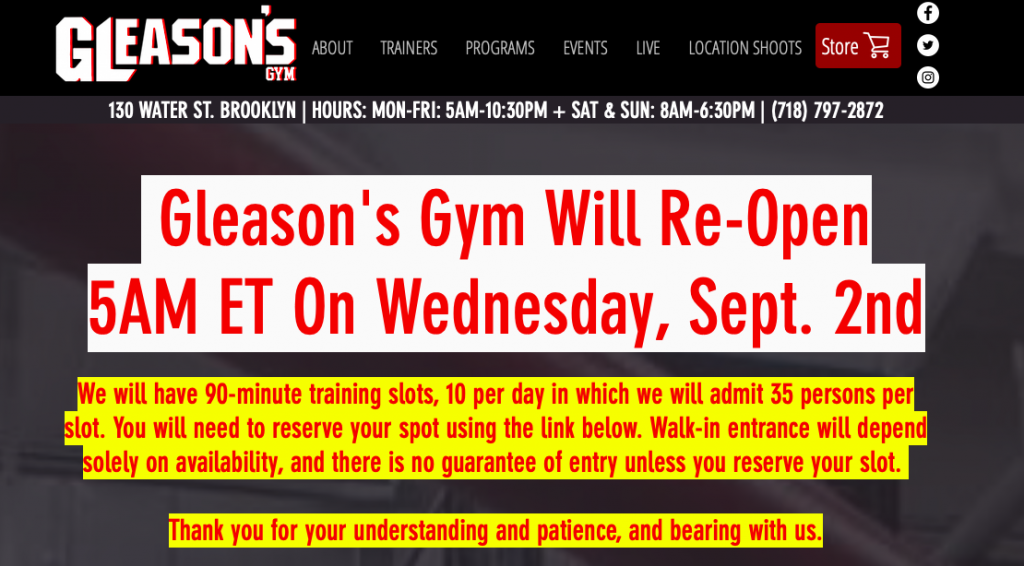 I asked Silverglade, is he positive?

“I am opening unless someone tells me I can not,” Silverglade stated.

He is ultra confident that the facility will be run with ultimate efficiency and top-caliber attention to hygienic detail. They say: “Gyms should operate at MERV-13 or greater; if they are unable to operate at that level, they must have heating, ventilation, and air conditioning (HVAC) professional document their inability to do so and adopt additional ventilation and mitigation protocols from American Society of Heating, Refrigerating and Air-Conditioning Engineers (ASHRAE) and the Centers for Disease Control and Prevention (CDC).”

…And Silverglade is on it.

OK, so basically, keep those fingers crossed, if you are a fan of Gleason’s, of Bruce, of pro boxing in NY, of people like Heather Hardy and Mikkel LesPierre.

Hardy sounded amped to hear that things are moving in the direction of “normalcy.”

“It’s exciting to say the least,” said Hardy, who holds a 22-1 record as a pro boxer. “There’s two pages of safety protocols that we all sat through a meeting for, new rules subject to change at any time. Bruce is doing everything he can to open up, and he’s already put everyone on notice we are following rules to make sure we don’t get shut down again. Bruce actually said, “I’ll die before I close the doors on Gleason’s Gym.” (Below pic off Hardy Twitter account, post on Aug. 24 was captioned, Bruce: “I’ll die before i close my gym!”) 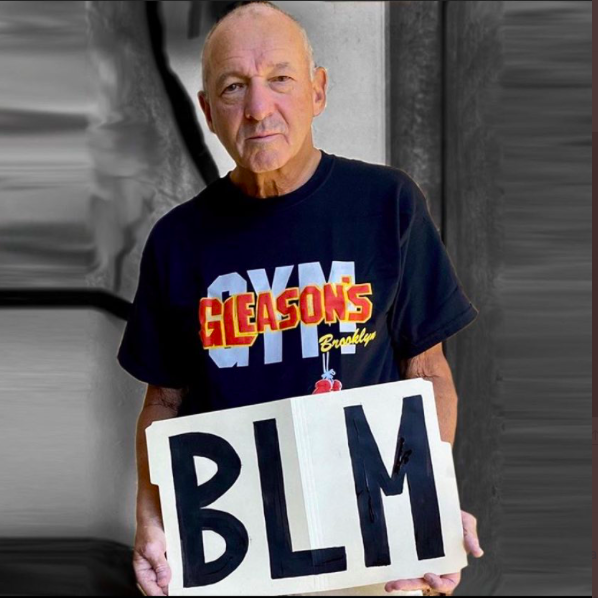 Silverglade echoed that level of resolve to RING.  “Unless the Mayor tells me specifically, I’m opening up. Everything I’ve read says it’s the Governor who’s the boss.”

I was going to write, “In closing, Silverglade said etc etc.” But what say that gets tweaked, to a more upbeat phrase which leads in the direction of positivity?

What should the message be, Bruce, for people who’ve been wanting to come back to the gym, that combination community center, mental health uplift facility and training space?

“Come and bring money on September 2nd,” Silverglade asserted, “and sign up for a year-long membership!”

Learn more about Michael Woods, if you like, from his LinkedIn profile.