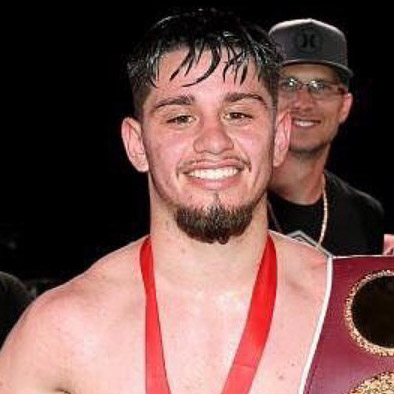 Ruben Villa was beginning to wonder if everyone forgot him. The 23-year-old southpaw featherweight from Salinas, California, felt unjustifiably bypassed when the World Boxing Organization ordered a fight between Jessie Magdaleno and Emanuel Navarrete for its vacant 126-pound title.

But on August 19, the WBO mandated that Villa get the shot at Navarrete, the former WBO junior featherweight titlist, as first reported by BoxingScene.com senior writer Jake Donovan.

When Magdaleno opted not to sign the contract to fight Navarrete, Villa moved up to No. 2, creating the possibility of a title fight in October for the vacant WBO featherweight title—which was Villa’s dream.

“I always wanted to fight someone who was a champion already, and I was always the underdog and I like being the underdog,” Villa said.  “I will be the underdog again for this fight. I really don’t care what people think my chances are.

“I’ve been boxing pretty much my whole life, and as far as people say I don’t have the power and skills to beat someone like Navarrete, this is more than just a fight for me. This is a fight for my family. This is going to bring the best out of me.

Villa is hoping to headline a main event, but there is a chance his fight gets placed in the Vasiliy Lomachenko-Teofimo Lopez blockbuster on regular ESPN on Saturday, October 10, from Las Vegas.

Lomachenko-Lopez is expected to generate huge numbers, by boxing standards, with no major college football to compete against.

“I prefer to have my own main event, but I wouldn’t mind being on the Loma-Lopez undercard,” Villa said. “I’m very sure we’re going to be fighting in October.

“I remember when I got the call that I was going to get my shot. My adviser, Rick Mirigian, called to tell me that Magdaleno wasn’t going to take the fight. I was playing ‘Call of Duty’ with my friends. I was trying to stay alive in the game, but I was thinking in my head, ‘this is about to really go down.’”

Villa still had the remote control in his hand when he heard the news he would get his dream shot. Villa realizes that he’s going to go into a new terrain that he’s never been before in his training and conditioning.

Villa is ready to break through that threshold.

“I train for every fight like it’s a championship fight, but for this fight, I’m going to work tirelessly every day until I can’t,” Villa said. “I’ve already begun training camp. I’ve been sparring for the last three weeks.

“I’m ready now. There are some tools that still need to be sharpened. The timing is perfect for me to win this fight and kick this guy’s ass.”

“I’ll be able to adjust more to his style than he is to my style,” said Villa, who is promoted by Banner Promotions and Thompson Boxing. “I watched Navarrete fight (Isaac) Dogboe, and I was cheering for Navarrete, since we’re both Mexican. But jumping to 126 is not the best move for him.”