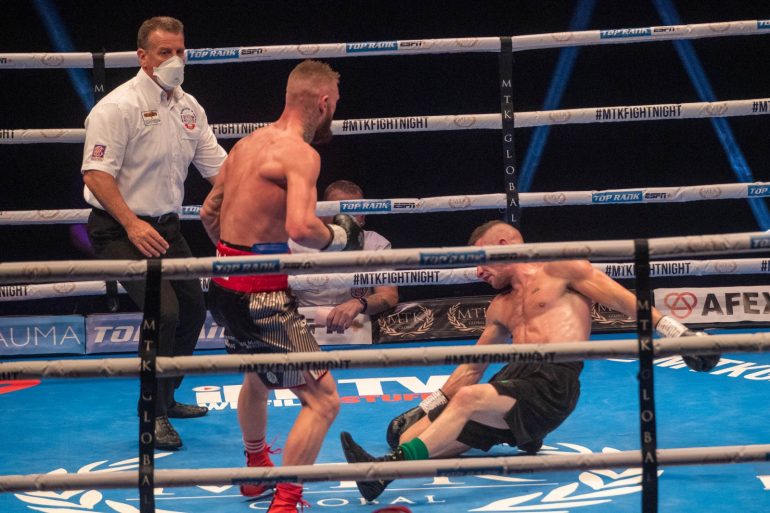 The 23-year-old Irishman decked Greene with a left hook late in the first round. To his credit, Greene gathered himself and looked to pressure Crocker, who remained calm and picked his shots well and always seemed a step ahead.

By the mid-rounds Crocker (12-0, 7 knockouts) seemed on course to win on points but stepped on the gas and dropped Greene with an impressive left hook to the body. Greene (12-2, 7 KOs) got to his feet but was dropped again and dispatched at 2:02 of the seventh round.

A destructive seventh round TKO win for @lewiscrocker1 to become the new WBO European welterweight champion.

Another tremendous performance from The Croc ?

“I felt in great shape in there,” Crocker said. “All the hard work paid off tonight. Fair play to Louis Greene, he was tough as they come, definitely the better fighter brings out the best performance because he did give me my toughest test of my career.”

Liam Taylor edged past previously unbeaten Darren Tetley over 10 highly competitive rounds in a British welterweight title eliminator. Taylor was awarded a 10-round unanimous decision 96-93, 96-93 and 95-93.

Taylor (22-1-1, 10 KOs) looked like he may stop Tetley (20-1, 9 KOs) early, dropping his opponent with a body shot in the second round. Though Tetley rebounded well, he was on the canvas again from a combination late in the third round.

Tetley was the better boxer throughout but Taylor’s pressure and body attack made for a compelling encounter. Both men had their moments in a seesaw fight. At the conclusion the two early knockdowns were pivotal.

“I think I made it harder for myself,” Taylor said afterwards. “When I got him hurt, I sort of lost the sharp mentality that I went in there with. I’m happy enough I got the win against an undefeated opponent. I’m glad he asked questions of me because he can punch a little bit, he’s sharp and tricky.

“I believe I should have been defending my British and Commonwealth titles tonight after the last performance against [Chris] Jenkins but that’s for another day.”

The talented 23-year-old from Scotland, who was fighting for the first time since his outstanding battle with Ukashir Farooq last November, had things in hand until landing a big right hand in the early stages of the fifth round to drop Walker to the seat of his pants. Although Walker rose from the knockdown, referee Phil Edwards wisely called off the fight at 0:16 of the round.

McGregor said he would like to defend his titles before the end of the year before moving on to bigger things in 2021.

Debutant Fearghus Quinn looked like he may get an early night but ultimately had to settle for a six round points decision over Robbie Chapman (6-4, 0 KOs).

Junior welterweight Gary Cully (11-0, 5 KOs) recovered from a trip to the canvas in the fifth round to edge Craig Woodruff (10-6, 4 KOs) over eight rounds by the sole score 77-75 on referee Phil Edwards scorecard.