Math appeared to be a daunting challenge for the judges, as they all submitted scores after the ten rounder that didn’t make any sense, but thankfully they got one thing right – the winner. Ring announcer Lupe Contreras announced that the judges saw the fight  79-72, 76-73, and 77-72, all for Torres, who improved to 8-0 with six knockouts.

Unless the ref was quietly docking Torres points after winning rounds, well, again, at least the right guy got the nod.

The fight was initially supposed to be the chief support bout of the card, but the Santiago Dominguez-Jose Cazarez feature fell apart. Dominguez instead fought in the semifinal match of the evening.

Vazquez (10-2, 3 KOs) found himself staring at the ceiling in the very first round after eating a hard right hand from Torres. But the 21-year-old Mexican mounted a rally.

A hard combination from Vazquez knocked the fellow Mexican Torres back into the ropes in round five. Late in the frame, he connected with another hard right hand, but Torres fired back with a flurry, and a right hand after the bell.

The fight was twice delayed in the seventh round when the tape on Torres’ right glove became undone. Late in the round, both fighters landed their best punches of the night. Vazquez landed with a beautiful right hand to the body and Torres landed a big right cross after being drilled with a low blow.

The fight appeared to be coming down to a battle of attrition in the eighth round as Vazquez and Torres threw everything in their arsenal. Torres connected with a right hook late in the frame, and Vazquez charged forward ripping body shots.

Torres momentarily hurt Vazquez with a stiff jab in the ninth round. With less than a minute remaining, he connected with a right cross that clearly wobbled Vazquez’s legs.  Torres dominated the 10th and final round, backing up Vazquez with hard left and right hands. With just a second remaining, Vazquez, however, connected with a big right hand, but it was too little, too late.

The bout ended a three-bout stoppage streak for Torres, but he remains unbeaten in his pro career.

In the chief support bout to the main event, Santiago Dominguez won via first-round stoppage after dishing a hellacious beating on Adalberto Borquez. 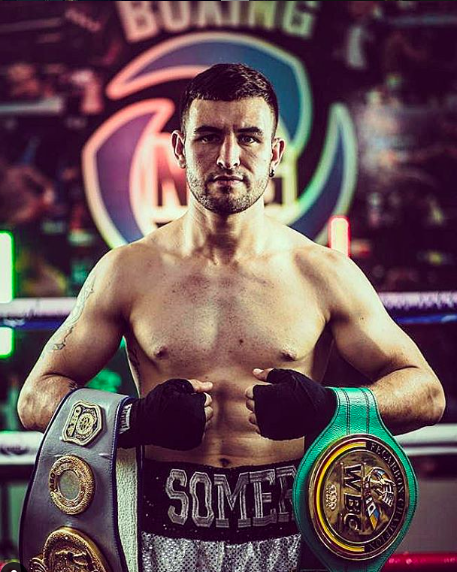 COVID drama forced a shuffling of the card on Monday. Dominguez had been slated to fight a stiffer foe, on paper, than Borquez.

Borquez, who stepped up to face the unbeaten Mexican on short notice, was dropped three times in the opening round in a scheduled 10-round affair.

With 1:45 remaining, Dominguez (22-0, 17 knockouts) connected with a right hand behind the ear that dropped Borquez to his knees. After beating the count, a right uppercut hurt Borquez (age 36; 30-20-1; has been stopped 13 times) before an accumulation of punches sent him down to the canvas for a second time.

After a series of punishing right hands knocked Borquez to his knees against the ropes, the referee waved off the fight. The time of the stoppage was 2:49.

The card got shuffled in the 11th hour. According to a release sent out by RJJ Boxing Monday afternoon, “Due to COVID-19 related problems, Adalberto “Terrible” Borquez (30-19-1, 27 KOs) has replaced Jose Rosario Cazarez as Santiago “Somer” Dominquez’ (21-0, 16 KOs) opponent in a battle of KO bombers. Dominguez-Borquez remains 10 rounds and contested for Dominquez’ WBC FECARBOX and WBC United States welterweight titles, but it is now the co-featured event. The original co-feature, Luis Torres vs. Jose Luis Vazquez, has been moved up to the 10-round main event for the vacant WBC Youth Silver lightweight title.”

Keith Veltre runs RJJ Boxing day to day. “We did have the main event test positive a couple of days ago, but we were able to replace,” he posted to social media on Monday.

Dominguez, 28, informed The Ring before his fight that he will move to the United States to begin training there.

“Fighting in America is the plan,” Dominguez said. “I want to be ranked, and I feel that fighting in the United States and fighting better competition is going to get me there faster. I want to face the top ten best in the welterweight division and fight for a world title.

“I wanted to train in the United States for this fight, but because of the COVID-19 pandemic, we have had to stay in Mexico. But once this situation clears up, I also plan on moving to the United States. I’m very serious about my career and I strive to be the very best.”

The welterweight prospect Jones (age 25; 5-0, 5 KOs) was born in Memphis, Tennessee and trains out of Phoenix, Arizona. He hurt Vera with a left hook to the body late in the second round and followed up with a stiff jab that sent his opponent’s saliva airborne out of the ring.

Jones, who considers himself a hybrid of Canelo Alvarez, Gennadiy Golovkin, and Tommy “The Hitman” Hearns–yes, he’s setting a high bar of expectations!–dropped Vera early in the fourth round with a thudding left hook to the body after stunning him just seconds before from a right uppercut.

Vera beat the count, but Jones jumped right back on him, connecting with a right-left hook body combination to crumble him.

It was more WWE style than pugilism displayed between junior featherweights Ezequiel Borrero and Jhoan Cano.

Borrero cruised to a unanimous decision victory in a scheduled four-round contest. All three judges scored the bout 40-36 for Borrero, of Mexico, who improved to 3-0 with one knockout as a pro.

Borrero stung Cano with a big overhand hand late in the second round and then pushed him down to the canvas. Late in the round, Borrero again hurt Cano with a right hand and threw him down to the floor, earning him a stern warning from the referee. A right hook connected in the fourth round opened up a cut on Cano’s left cheekbone. Cano dropped to 1-2.