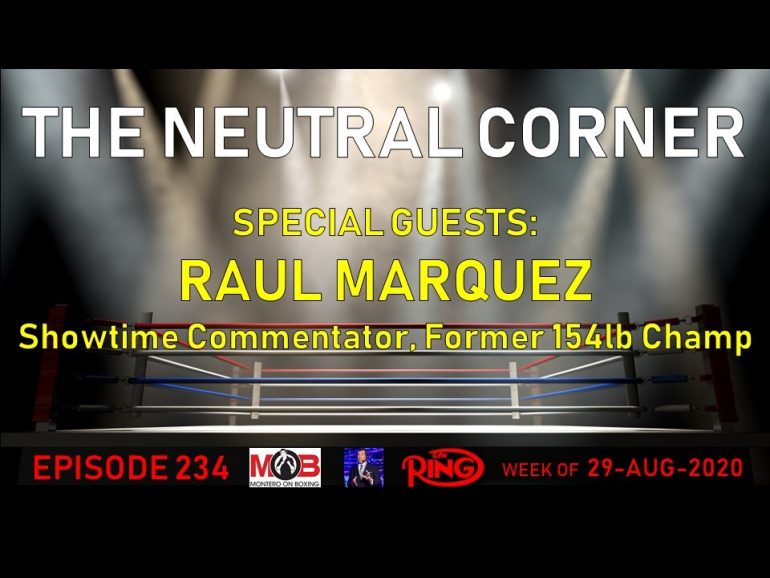 On episode 234 of The Neutral Corner boxing podcast, host Michael Montero was joined by ShoBox commentator and former junior middleweight titleholder Raul Marquez. When asked about the proposed comeback of Oscar De La Hoya, he made it clear that he wants a crack at The Golden Boy.

“I would love to fight Oscar,” he told The Ring. “Look, you don’t need to fight Sergio Martinez, he’s not gonna sell the fight, he’s too nice. Or Amir Khan, he ain’t got no chin. Oscar is the only fight I would come back for. We’re both around the same age. His people know how to get ahold of me. That’s a fight I’ve wanted for a long time.”

“Even back then I called him out,” he said. “I always wanted a shot at him, I felt I had a style that could beat Oscar. He had trouble with left handers, guys who could take a shot, guys who worked the body. Bruce Tramper (matchmaker for Top Rank) told me many years ago why Oscar De La Hoya didn’t want to fight me. I’m not gonna tell you why, but it’ll come out if we ever do fight.”

Although they were roommates and friends back in the amateurs, Raul claims he hasn’t spoken with Oscar in almost 20 years. If De La Hoya is serious about a comeback, a fight with Marquez (just two years his senior) would make for one heck of a grudge match.

Several people called the show from both the U.S. and the U.K., mostly to talk about the Alexander Povetkin’s win over Dillan Whyte.

Miguel had strong feelings about Whyte. “Yeah, he’s been the No. 1 WBC contender, but how many times has he screwed up in the past?” he asked. “Didn’t he pop for steroids twice? (Whyte received a two-year ban in 2012 but was cleared of a second violation by UKAD last year) If you ask me, he’s out of the top 10 (heavyweight ratings). He’s still whining and complaining. Against Povetkin, he got Boxing Karma.”

JP, who actually picked Povetkin to beat Whyte, echoed Miguel’s sentiments. “I felt like Povetkin had a great chance to beat him,” he told The Ring. “I just really wanted someone to knock the f*ck out of Dillian Whyte.”

Nigel took issue with the Sky Sports commentary on their Whyte-Povetkin broadcast in the U.K. “As a boxing fan who has bought pay per views for years, supporting the sport, their commentary is just atrocious and I want Sky to address is. You would have thought Dillian Whyte was shadowboxing in the ring, the way they dismissed Povetkin all night.”

Trav kept it in the heavyweight division, but expressed his distaste for an upcoming fight very few fans seem to be asking for. “What is the purpose behind Fury-Wilder 3?” he asked. “Nobody wants to watch a third fight between them. Fury already beat him twice. I’m not buying the pay per view, I know that much.”

“Dillian Whyte is very fundamentally flawed,” Hamed told The Ring. “I saw it in his fights with [Oscar] Rivas, [Joseph] Parker and [Derek] Chisora. I think he has a solid resume, but some people started to overrate him. I think there is a gulf between the top two heavyweights, [Tyson] Fury and [Anthony] Joshua, and the rest.”

Chris wrapped it up with some comments about his favorite active fighter, and vented frustration that he doesn’t have a fight scheduled. “My favorite fighter at the moment is Naoya Inoue,” he said. “I’ve got some friends at work who are massive UFC fans. I’ve been trying to get them into boxing for a while, so I told them about Inoue, showed them some videos. Now they’re all in on the Inoue hype train. But when is his next fight? I haven’t heard anything in ages.”