Alexander Povetkin shocks Dillian Whyte with come from behind knockout 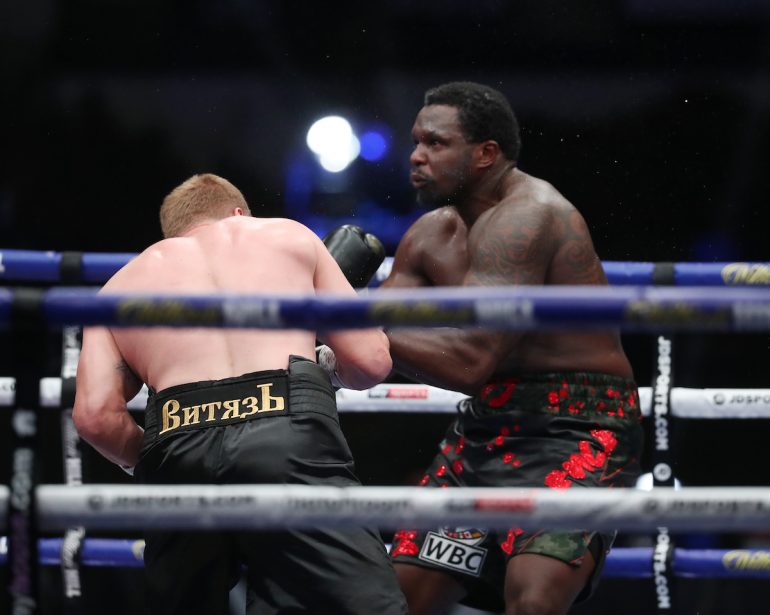 Dillian Whyte is out before he hits the canvas from a left uppercut. Picture By Mark Robinson
22
Aug
by Ryan O'Hara

Dillian Whyte was cruising against Alexander Povetkin, until he wasn’t.

Povetkin, who turns 41 on September 2, was already down twice in the fight when connected with a one-two combination, a jab, followed by a thunderous left uppercut to knock Whyte out cold in the fifth round of their battle for the interim WBC heavyweight strap.

The bout served as the main event of a DAZN-streamed card from the Matchroom Fight Camp in Brentwood, England.

Povetkin (36-2-1, 25 knockouts) had lost every second of the fight prior to the knockout. In the fourth round, ‘The Body Snatcher’ put the Russian down twice, once from a short left hook, and again from a wicked left uppercut.

The former title challenger appeared to be on his way to getting stopped. But as boxing has shown perpetually, one punch is all it takes. Saturday was no exception.

Thirty seconds into the fifth round, Povetkin annihilated Whyte with one shot.

“I didn’t think I would finish the fight like this,” Povetkin said through an interpreter. “But I was pretty confident in the fourth round; I was knocked down twice (in the third round), but it was okay, (I didn’t take) too much damage.”

Povetkin added that he watched some of Whyte’s fights during training camp and took into account that he was vulnerable to the uppercut both from the left and the right side.

“It was probably the best finish of my career.”

Matchroom Sport promoter Eddie Hearn said after the fight that a rematch is on the table.

“The negotiations to fight for the WBC title were only if Dillian retained the interim title, so we are going to invoke the rematch clause hopefully by the end of the year.”

The fight kicked off with some close, technical rounds, with both pugilists working off the jab, and finishing combinations to the body. But Whyte picked up the pace in the fourth round to score the two knockdowns. He ran out of time to go for the finish, which may have cost him.

By the start of the fifth round, it appeared that Povetkin’s head was clear and his legs were back underneath him as the action resumed. 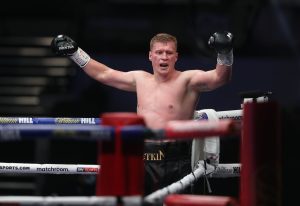 Referee Mark Lyson didn’t bother to issue a count and immediately waved off the fight.

Whyte came into the fight noting that he had spent nearly three years as the WBC’s No. 1 contender at heavyweight. For around the same amount of time, he clamored that he was more than deserving of a shot at the title.

This result was a major setback. Even with the guaranteed rematch, getting knocked out will require some time on the mend. But Whyte has been in this position before.

Joshua stopped him in the seventh round of their December 2015 bout, and he still managed to put himself back into title contention, so anything is possible.

While Povetkin holds the interim title, only Whyte was guaranteed a shot at the winner of Fury-Wilder III. WBC president Mauricio Sulaiman said earlier in the week that Povetkin would not earn a mandatory shot at Fury even with a win.

Povetkin has challenged for heavyweights titles twice, both times unsuccessfully. He squared off against unified and The Ring world champion Wladimir Klitschko for his titles back in October 2013 in Moscow, but was dropped four times en route to a lopsided unanimous decision loss. He was also knocked out in the seventh round by unified champion Anthony Joshua in a September 2018 bout at Wembley Stadium.