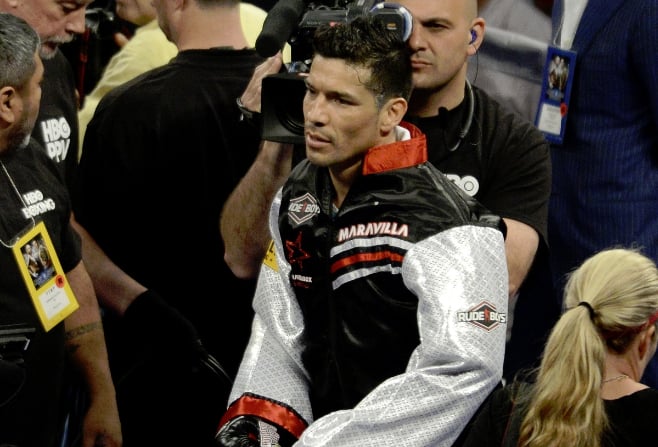 Martinez (52-3-2, 29 knockouts) was returning to the ring for the first time in over six years. In June 2014, the former pound-for-pound entrant, hampered by a recurring knee injury, was dropped four times by Miguel Cotto in a 10th-round stoppage defeat, surrendering his Ring Magazine and WBC middleweight titles in the process.

Originally from Buenos Aires and now residing in Madrid, Martinez did stay involved in boxing, promoting and managing fighters. However, he had always teased about the possibility of a comeback, even posting sparring or training sessions on social media.

Fandino (15-7, 8 KOs) came into the Martinez fight having split his previous four bouts.

The southpaw Martinez was the more effective fighter throughout, utilizing his superior skills to outland Fandino. The blazing speed was no longer there, but an effective jab set up several straight left hands to the head.

With each passing round Fandino looked more and more spent as Martinez gradually broke him down. The first knockdown came in Round 6 and it was only a matter of time.

The end came in the following round when Martinez landed a straight left hand to the stomach of Fandino, who turned away and dropped to the canvas. The stricken Spaniard struggled to get up and was counted out at 1:50.

Martinez, who is promoted by Sergio Martinez, was declared the winner when a cut, which had been caused by a punch, led to the bout being stopped.

Junior middleweight contender Sergio Garcia (32-0, 13 KOs), who is also promoted by Martinez, remained unbeaten in front of his hometown, defeating Pablo Mendoza by unanimous decision. Scores were 99-92, 98-93, and 98-92.

Mendoza, who is originally from Nicaragua and now resides in Toledo, Spain, drops to 9-5 (9 KOs) and has now lost his last three fights.