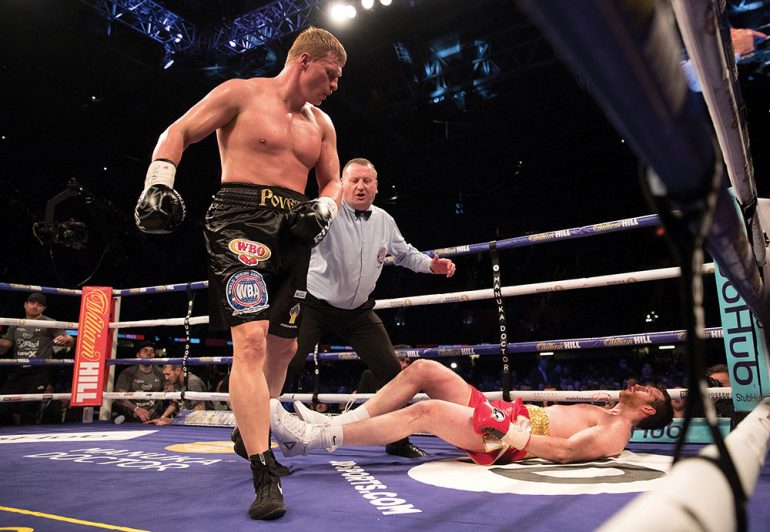 Alexander Povetkin is in town and says he’s ready to win against Dillian Whyte. The two meet in a crucial heavyweight clash in Brentwood this Saturday. Whyte is the WBC’s long-time top contender and Povetkin is a savvy veteran who says he retains his ambition.

And while he’s faced the likes of Wladimir Klitschko, Anthony Joshua and Ruslan Chagaev, he isn’t taking victory over Whyte for granted. He accepts the Brit will give him a real fight.

“He’s not an easy guy,” admitted the sleek looking 40-year-old. “He’s big, athletic, it shouldn’t be easy for me or any other heavyweight. He has a good right hand and left hook. He’s athletic, a big guy with good physical conditioning. His weaknesses? I don’t know. We will see in the fight what weaknesses he has.”

Sky Box Office, who televise in the U.K., have called it a battle of left hooks. Povetkin isn’t so sure.

“I don’t feel like my left hook is very powerful, let’s see,” he smiled. “Nobody has told me that but this is one of Dillian’s biggest strengths, for sure.”

They are the final act of Matchroom’s much ballyhooed Fight Camp series, the culmination of four weeks of fights at Matchroom’s HQ, in the open air but “behind closed doors.”

“I haven’t seen the venue but the fact there won’t be an audience, it’s okay,” said the visitor. “The ring is square everywhere, so it doesn’t make a difference.”

Back when Povetkin was being trained by Teddy Atlas, his former coach had him work on his skills in some smoker-style fights, with no crowds, but that was to prepare him for fights he otherwise might not have been ready for.

“There was some experience like that in the United States but it was more to keep condition without the fights, more like sparring with unlimited power,” he explained.

The original date for this contest was back in May. It was rearranged before the current scenario was arrived at but Povetkin said coronavirus hasn’t interrupted his plans too severely.

“Nothing specific,” he said, when asked how his preparations had been affected. “We were supposed to bring over Derek Chisora and he should have come two weeks before so we moved him to spar here and then Matchroom moved when we could come,” he said. “We have had good sparring partners but we were also supposed to bring over some Americans which was not possible.” 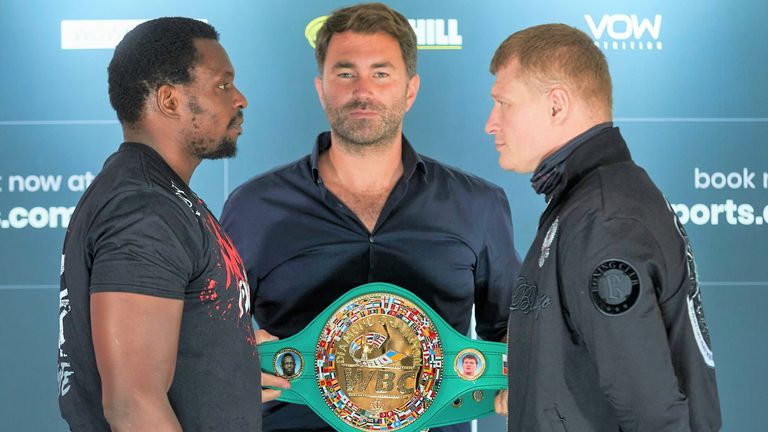 Plenty has been said about Whyte fighting tough contests while he’s in line for a shot at WBC titleholder and Ring Magazine champion Tyson Fury.

Is Whyte making a mistake, fighting rather than waiting for his shot?

“At one point maybe it was easier to wait a little bit but at the end of the day it’s his decision and he decided to face me,” said Povetkin. “I’m always open to fight.”

Of course, the big money lies in fights with heavyweight kings Tyson Fury and Anthony Joshua, and the Russian, who was stopped by Joshua in 2018, can’t split the Brits when trying to assess who is the best in the world.

“I can’t really tell who is better or worse because each one has their advantages,” he said. “Joshua probably is the more technical, powerful guy. Fury’s unusual style is very difficult for his opponents, so they’re probably on the same level. I can’t rate who’s number one or number two.”

Is Whyte up there with them?

“For Dillian, in general, it depends what condition he’s in, because the fight with [Mariusz] Wach he was in very bad shape. When he’s in good shape he’s probably on the same level as them.”

Some are saying that the Whyte who has entered Fight Camp is in the shape of his life. Many are expecting the fight to be dramatic and Povetkin understands why.

“We will see but basically the people are right,” he said. “There should be fireworks.”

Whyte vs. Povetkin, Katie Taylor vs. Delfine Persoon 2, and several other undercard attractions will be broadcast live on DAZN in the U.S. and Sky Sports Box Office in the U.K.