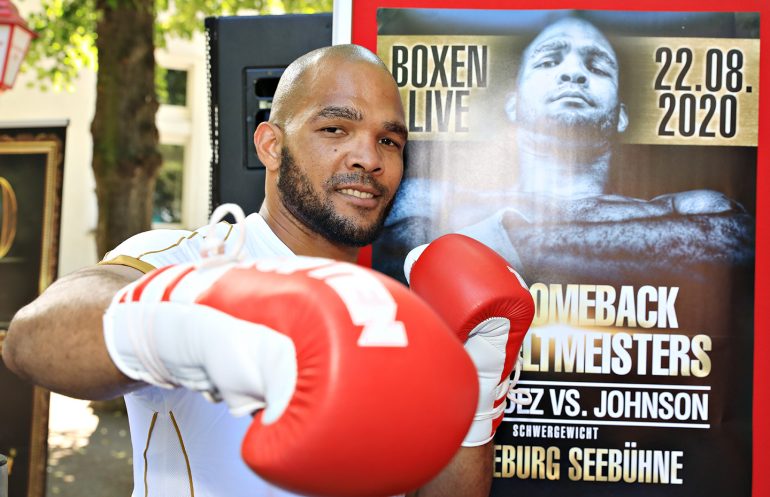 Hernandez is keen to shed some ring rust and test his skills against the usually durable American.

Johnson is a “very experienced boxer,” Hernandez told The Ring. “He has fought all the big names and I think [Anthony] Joshua is the only one who stopped him inside the distance. Vitali Klitschko, (Tyson) Fury, (Dereck) Chisora, Andy Ruiz Jr., Kubrat Pulev and Mariusz Wach, none of them finished him before the final bell.

“He is a journeyman, but this guy is tough enough to be a stepping stone for my first fight in my comeback to see how I will be at heavyweight.”

Hernandez decided to retire from boxing as the reigning IBF cruiserweight titleholder due to several long-standing injuries in 2014.

The next chapter in his life saw the Cuban-born fighter move his family to Stendal in the German region of Saxony-Anhalt. During his time there his family settled and he helped establish the Boxclub Stendal. A conversation with the Boxclub Stendal coach, Christoph Schlender, helped him decide to bring an end to his 6-year retirement.

“It’s a town with a very active amateur boxing club,” Hernandez said. “I had the opportunity to train some kids, I’m settled there with my family. I feel happy there.

“Christoph Schlender told me, ‘There is enough power in you.’ It made me think there is something left in my story. I want to finish my story. In 2014, I had injuries in the elbows, the knees and I was stripped of my IBF belt.

“I am 35, I had problems (making) cruiserweight, but it is an open door at heavyweight. I had to lose a lot of weight to make cruiserweight. The injuries are over and having to make weight is also over. I felt the ‘special spark’ in my fists—so my upcoming opponents will feel this.”

SES founder Ulf Steinforth was surprised at the shape Hernandez kept himself in and is only too happy to give the former titlist the opportunity to return to the ring.

“Hernandez has nothing to lose, he had a great career at cruiserweight,” said Steinforth. “He is the unbeaten champion for four defenses. I feel the story for Hernandez is not told to the end. I am optimistic he can do something in the new division in the next two or three years.

“Everybody was proud to see boxing was going on with an audience (in the last show). We shall repeat this week, testing the fighters and their teams several times, so the risk is reduced.”

Johnson, who has been stopped three times, once by Joshua and more recently by Petar Milas and Martin Bakole, turned professional in 2003. He worked his way up the ranks before losing his unbeaten record against WBC titleholder Vitali Klitschko in December 2009.

Since then, he has given many of the top big men of his generation rounds, since he’s dropped to journeyman status. While he is unlikely to cause the upset, he should give Hernandez an idea of what he has left.