COMEBACK FROM COVID: Gleason’s Gym will re-open Monday, August 24, at 5 AM 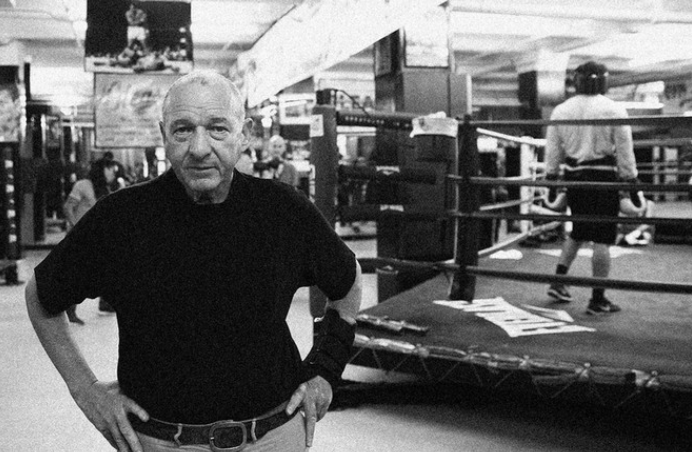 The pain of coronavirus has been felt most acutely within the New York region in terms of deaths.

At last count, 173,000+ people died from COVID 19 within the US and almost 33,000 perished from COVID in New York. That should be at the top of your mind when we ponder the carnage left behind by the virus. The economic elements of the virus’ spread and lethality and ability to be transmitted are also considerable.

Bruce Silverglade owns and runs the famed and fabled Gleason’s Gym, in DUMBO, Brooklyn, NY. For 37 plus years, the New York native has opened his doors, and people that have walked into the facility came to understand that a gym is not simply a place to drop sweat. Gleason’s Gym is a community center, and so the sting of the closing of the gym’s doors, as part of a closure push to eateries, theaters, bars, to limit viral spread, on March 16 has been piercing.

Physically, and mentally, maybe even more mentally, the shuttering of Gleason’s, on advice of the Governor of the state, has left lasting damage. Silverglade has told RING that unless he was allowed to re-open pretty soon, he’d have to step away. He’s been paying his rent, his property taxes, and he wouldn’t be able to do that in to the new year. Today, Silverglade is breathing a sigh of relief, and seeing light at the other end of a dark tunnel that isn’t, to be honest, fully lit up and showing a clear path to sunny days free from anxiety.

That’s because NY Governor Andrew Cuomo did a public session on Monday morning in which he said that gyms, like Gleason’s, could re-open, as early as August 24.

Gyms can open at 33% capacity with mandatory mask wearing and other strict health measures, the Governor said (see video snippet below.)

Of those tested Sunday in New York state, .71% tested positive for the virus — the lowest daily number in NYS, since widespread testing started, in March. Apparently, the continuing trend of the curve staying flat allowed Cuomo to feel confident that gyms can get back in business.

Silverglade, in his office at the DUMBO institution, spoke to RING.

“I am elated! Gleasons will be open at 5 AM Monday, August 24,” he told us. “By appointment only, please call your trainer or the gym, because we are limited to 33 percent capacity.”

Silverglade isn’t done fighting his good fight, though. “However, I don’t think leadership has answered the charge of discrimination versus professional fighters,” he continued. “The protocol the Governor mentioned, the masks will work for everyone but those who spar.”

He said he will continue to confer with politicians who have stepped up and been responsive to his quest to stave off financial ruin, and get the gym door open, with the utmost care taken to provide a hygienic experience.

The gym show runner shares information with pols who will step up for citizens, like a study on people with no COVID-relevant co-morbidities present done in Norway which showed no added risk to become infected for people working out in gyms.

As the months passed, frustration grew among gym owners, and people seeking to exercise in their favored spot to help their physical and mental health. When June, then July passed, and gyms stayed on the shutdown list, Silverglade’s anxiety level rose. On a session organized by Jill Diamond, he spoke from the heart during a WBC Zoom talk to share the difficulties felt by NY-area boxing people who weren’t able to get proper training, even though pro hoops players and MLBers were granted the right to gather to train. 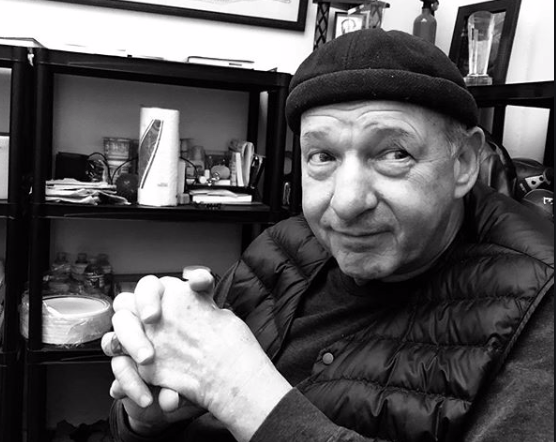 Silverglade publicly lobbied for his gym to be able to open, so area professionals could train effectively and be able to make a living. It looks like he is thisclose to being able to let those pros come in and work out.

Cuomo has periodically announced phases of re-opening, and people like Silverglade admitted that they felt left out, because no one among leadership told them a time frame when he’d be included. In July, gym owners banded together, and put in motion a lawsuit to force the state to allow gyms to come off the shutdown list. By August, Silverglade’s patience level started running thinner. Calls to local politicians didn’t work, Silverglade got left in the dark as to maybe when he’d be able to re-start his business.

You can watch  the WBC talk, below, and hear Silverglade project how much money he will lose because the gym has been closed since mid March. It’s also fascinating to hear pros like Heather Hardy speak to how she was affected economically by the shutdown.

The 62 year old Democrat Cuomo in a Monday Q n A which ran after he offered an overall summation of how COVID is affecting the state told a reporter he understands the matter of gyms being locked hits nerves.

But, people have a bias, at times, he said, and folks who are regular gym-goers might be more inclined to really desire for their gym to throw open the doors. He tried to convey that being safer rather than sorrier has been his guiding POV. A spokesperson for Cuomo reiterated that gyms must adhere to a capacity of 33%, and people must wear their masks inside. Yes, even on a treadmill, Cuomo said. “These are very tight guidelines,” said the Governor, hours before his showcase on the first night of the Democrat’s convention to officially nominate Joe Biden to face off with Donald Trump in the November 3rd runoff to be Commander in Chief.

Much of the Q n A session focused on the re-opening of schools. Cuomo said he’d look to be “aggressively conservative” when asked what the parameters would be when a student is found to be COVID positive in school, but he didn’t give specifics. NYC has the largest school system in the United States, with over 1.1 million students taught in more than 1,800 separate schools, for the record. Cuomo continued, and said that he tried to figure out what businesses should be opened and what should stay shut based on degree of risk to those frequenting the business’ facility, and how essential the business is. People like going to the movies, but are theaters essential? That is open to interpretation, he said. But Cuomo said gyms are right now MORE essential than movie theaters. Certainly the local professional fighters, like Heather Hardy, would agree with that.

New York fighters, like Mikkel LesPierre, found themselves being unable to prepare for fights as well as fighters in regions with less strenuous regulations. Working out in Central Park provides a fine photo opp, but leaves a LesPierre at a deficit when facing a foe from another state or country who has been allowed to invite sparring partners to the gym to sharpen up. 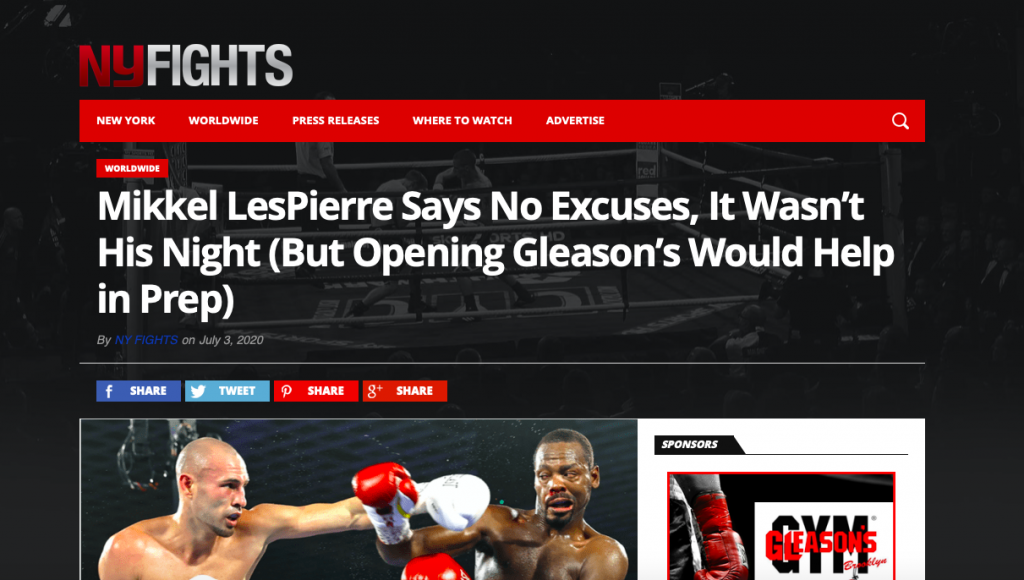 LesPierre couldn’t very well spar with trees. And sparring in a park would draw the cops. He wasn’t at his best for the July 2 fight vs. Jose Pedraza.

“I just heard,” LesPierre, a Brooklyn resident, told RING. “And I’m ecstatic. It will feel good to get back to some normality! And that gym atmosphere.”

The “atmsophere” he mentions is what I meant when I spoke on the mental health benefits of the facility being open for business. The camaraderie found in that community center pays massive dividends in fending off depression.

Another Brooklyn resident, pro boxer Hardy, shared her reaction to the news with RING.

Is this not good news? “Could be! I’m still going to be extra careful,” Hardy told me. She well knows that New York has a rep for making it so bureaucratic red tape entangles businesses and so, it feels like, she’s waiting to see with her own eyes how the re-opening plays out, before going all in with a response.

Now, one element that needs to be addressed. The mandate that everyonse inside must wear a face mask…That isn’t feasible for the people who want to engage in sparring.

LesPierre concurs. “I think for boxing gyms it should be a little different, because I’m pretty sure the people that will be allowed in first are the professionals so those that are pros shouldn’t be held to those standards. As long as we are COVID-free… but others, yes,” LesPierre said. “Masks inside, but once training starts then we (should be able to) take it off.”

But for now, really, Silverglade is mostly indulging in feelings of relief and elation…with some reservations that come from being an NYC native, and knowing that devils can be found in details.

That would be a New York style reaction….celebrate, whoop, and holler and appreciate…but keep some emotion in reserve.

It’s not cityfied cynicism, it’s some concrete wisdom. Save the Champagne for when the bell rings on August 24th at 5 AM, to fully signify a grand re-opening.

Michael Woods is a Brooklyn resident. He worked at NY Newsday, ESPN The Magazine, ESPNNewYork and he’s published NYFights.com, since 2016.