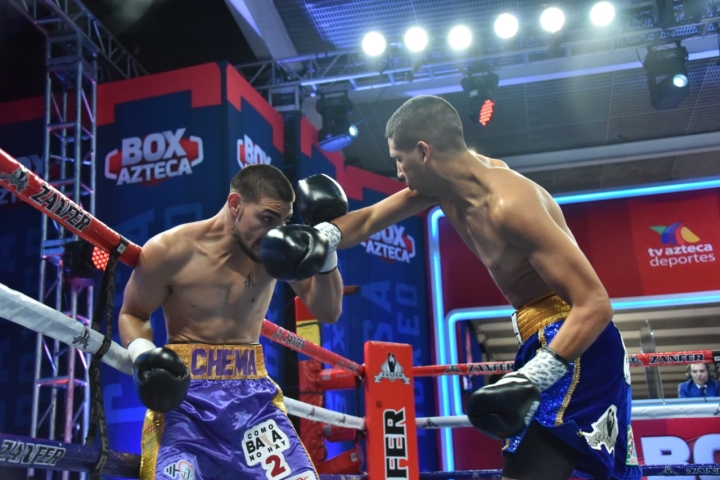 Ocampo (right) had things his own way against Garcia.
15
Aug
by Francisco Salazar

Ocampo last fought on December 14 in his hometown of Ensenada, Mexico, forcing Adolfo Moreschi to remain on his stool following the fourth round. The 24-year-old is best known for a first-round knockout loss to Errol Spence Jr. in an IBF welterweight title fight in June 2018.

Ocampo was the more-effective fighter throughout the bout. Garcia was game and found success in some exchanges, but Ocampo connected almost at will, landing several combinations to the head.

By Round 7 Garcia was in survival mode, content to throw one punch at a time. Ocampo pressed the action infrequently in the second half, but, ultimately, settled into a rhythm and outboxed Garcia up until the final bell.

Garcia, who resides in the boxing hotbed of Los Mochis, Mexico, drops to 18-3 (16 KOs). The 23-year-old has now lost two of his last three bouts.

Former fringe junior welterweight contender Rafael Guzman, who was fighting for the first time in over three years, lost by majority decision to Mexico City’s Jose Eduardo Hernandez. One judge scored the bout 57-57, while the other two judges scored the bout 59-55 and 58-56 for Hernandez, who improves to 8-4-3 (3 KOs).

Zanfer Promotions promoted the card, which aired live across Mexico.

Francisco A. Salazar can be reached by email at [email protected] or on Twitter at @FSalazarBoxing